Have you ever seen what a whipping can do to a person? I have, and I will never forget. A preschool-age child came to our home to be our foster son. When it was time for his first bath, we discovered the scars on this beautiful child’s back. We also learned quickly that the child had more than physical wounds; he had deep emotional trauma. Every night we would gently put him to bed and later discover him standing quietly by our bedside, just to be near us. Sometimes he would fall asleep on our floor. It took months before the child could share the stories of what had happened to him. Thankfully with lots of love and some therapy, he has been healing.

Whenever I read the story of Jesus using a whip (found only in John’s Gospel), I think of our foster son. Two days in a row, this Saturday, January 15, and Sunday, January 16, many Christians will be reading John 2:13-22. Jesus’ protest in the Temple is Saturday’s Gospel reading in the Daily Lectionary Readings used by the PC(USA) and others. The Narrative Lectionary has this Gospel reading for this Sunday. After two days of reading about Jesus’ protest, we remember the birthday of Martin Luther King, Jr., a man whose advocacy of Christian non-violence changed the U.S. and the world.

The two most popular biblical translations of John 2:15 are very similar in seeing Jesus’ action with a whip being directed towards the animals and not people:

The problem is that the New Revised Standard Version Updated Edition (NRSVue) that was released by the Society of Biblical Literature and the National Council of Churches on Christmas Day 2021 has a mistranslation, with Jesus using the whip on people:

The implication of the NRSVue’s translation is that Jesus whips people. I know that this is wrong because I did a research paper on Jesus’ protest in the Temple for Bruce M. Metzger, who was a world-renowned authority on translating the New Testament from the original Greek. Metzger was a member of the Translation Committee whose work resulted in the Revised Standard Version Bible, chaired the committee for the New Revised Standard Version Bible, co-edited the United Bible Societies’ The Greek New Testament and A Textual Commentary of the Greek New Testament, and co-edited The Oxford Annotated Bible, The Oxford Companion to the Bible and many other books. I was not a great Greek scholar, but I knew how to do research. Metzger gave me a good grade on the paper I wrote for his class and talked with me about it, showing he had read it with care. He later wrote me that the NRSV Bible Translation Committee had decided to change the RSV Bible to show that Jesus did not whip people.

Since my seminary days, I have served churches in small towns, suburbs and cities. In these places I have sought to support people who were abuse victims. I have also joined efforts to prevent and end wars. I continue to be troubled by Christians who feel they can use violence in many ways because Jesus supposedly used violence in the Temple.

My tradition sees the Bible as our “rule for faith and life.” In the congregation that I serve, we have two weekly Bible studies; two weekly evening prayer services guided by the Psalms, Mary’s song and Gospel readings; monthly Bible studies for men and women’s groups; and Sunday worship services. I grieve when this book of God’s love for humanity is used to justify violence rather than to further God’s peace and justice.

When I wrote the Society for Biblical Literature asking them about John 2:15’s translation in the NRSVue, their response was to point to a Journal of Biblical Literature article by N. Clayton Croy, “The Messianic Whippersnapper: Did Jesus Use a Whip on People in the Temple (John 2:15). Their reference to this article was inaccurate.

Croy is a Methodist layman who taught at Oxford and Trinity Lutheran Seminary and wrote the popular A Primer on Biblical Greek along with several other books. He examines both the grammar and other translation issues of John 2:15 in his thoughtful article. He summarizes his detailed study by stating at the article’s end, “Jesus did not apply the whip to persons in the precincts. If that interpretation is correct, it is thoroughly consonant with the broadly attested tradition of a non-violent Jesus.” I thought it was very clear that the SBL translators had misunderstood Croy, but I wrote to him to clarify his understanding of John 2:15. Croy responded, “the change [the SBL translators] made does NOT reflect my research on the passage, but just the opposite. The error that translators (and some scholars) make is that they see the word “all” (πάντας) in the accusative masculine plural and they assume that it must refer back to the people. But, as I argue in the JBL article, the following phrase (“both the sheep and the cattle”) is giving the parts of the whole that is expressed in πάντας. The Greek word for sheep is neuter, and the Greek word for cattle is masculine, so the word “all” could conceivably take either of those genders. I suspect that πάντας may have gone into the masculine simply as a “default” gender, or to connect with “cattle” as the larger animal more likely to require the whip. In any case, the least likely – I would say, simply erroneous – translation is to take it as referring to the people, with the animals tacked on with a preposition.”

My real concern is more than a translation error; it is inevitable when 20,000 changes are made that at least one error will happen. Unfortunately, this mistake can literally cost lives, as misguided people think “if Jesus was violent, I can be, too.”

So, what do we do? Churches and individuals should work to have SBL and NCC correct their mistake. Book and journal publishers should be encouraged to note the error when referencing the John 2:15 NRSVue. Seminary professors and other Bible teachers should be contacted and encouraged to read “The Messianic Whippersnapper: Did Jesus Use a Whip on People in the Temple (John 2:15)?” and incorporate it in their writings and classroom teachings.

There are three editions of the Bible known as the “Murderer’s Bible” because of printers’ errors, including a 1795 King James version from 1795 that says: “Let the children be killed,” instead of “filled” (Mark 7:27). I hope the NRSVue will be corrected soon to reflect the best scholarship and to be consistent with Jesus’ teaching for peace. If not, the NRSVue might sadly be called “The Whipper’s Bible” in the future.

Why make the effort to get the NRSV translation of this verse into the NRSVue? The Bible matters; it has an amazing track record of changing lives and the world. SBL and NCC are respected institutions with many good people doing important work. Pointing out an error is done out of love. More importantly, we might save some children from being whipped and people from getting killed. Showing Jesus as nonviolent will help the world in need of his peace. 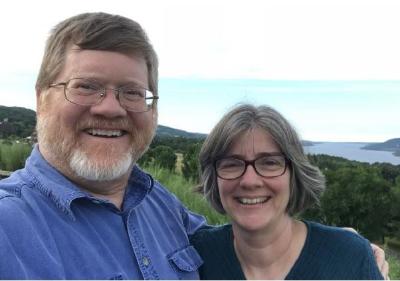 Bruce Gillette has M.Div and Th.M degrees from Princeton Theological Seminary. He and his wife, Carolyn Winfrey Gillette, have served churches in New Jersey, Delaware, Pennsylvania and New York. Bruce is the moderator of Presbyterians for Earth Care.