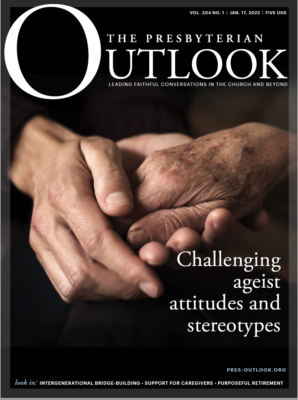 Moderator Herbert Valentine, in his first major report to the General Assembly Council, had plenty of good things to say about what he’s seen and heard of the Presbyterian Church (U.S.A.).

His travels [across the country], he said, have shown him … “the vibrance” in the church.

Of those people he met, he said, “They’re smart, they have a profound faith and ways to profess it … and they would stop at nothing to get the job done.”

That kind of leadership drew continued praise from Valentine, “There’s a great deal of leadership,” he said emphatically.

However, he also noted some warning signs. “We are caught as a church in a bureaucratic cycle that is stultifying, deadly to the creativity,” he said. “We need an end to that cycle.”

As an illustration of what the church needs to do to change, Valentine told a story about a [question he asked] a Native American hoop dancer. “What happens when the muscles aren’t as flexible, and your bones begin to creak and the weight begins to come on?” The dancer shot back: “Get bigger hoops.”

From “Moderator Valentine praises vitality in the church” by Gene Williams