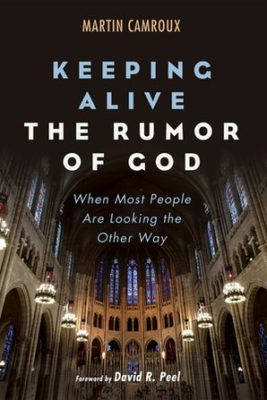 Martin Camroux, a pastor and leader in the United Reformed Church in the United Kingdom has produced a fine and timely book, Keeping Alive the Rumor Of God. I thoroughly enjoyed and heartily recommend it. Camroux is an excellent writer, and the man has somehow managed to read everything!

The book is a compendium of the voices that have influenced Christian theology, faith and practice from antiquity to the present. Camroux’s bibliography is a full 11 pages. Augustine, Anselm and Abelard, Aquinas and John Calvin are here. Paul Tillich, Karl Barth and Hans Kung, biblical scholars Kaseman and Brueggemann, influential American preachers Harry Emerson Fosdick, William Sloane Coffin and Martin Luther King are called on to illustrate and buttress, as are composers, artists, poets and architects such as J.S. Bach, Mozart, Botticelli, Tintoretto, Emily Dickinson, T. S. Eliot and Wendell Berry. A long, ongoing conversation and argument with neo-atheists and critics Richard Dawkins and Sam Harris is witty and sharp and continues through the book. Even Donald Trump, who Camroux does not like at all, makes it into the narrative.

Christian basics are examined and helpfully exegeted. I was personally engaged by Camroux’ approach to the matter of God through Paul Tillich’s harrowing experience at the Battle of Verdun in the First World War. Tillich’s traditional faith was shattered. It was later, pondering Botticelli’s “Madonna and the Child with Singing Angels,” that his faith began to be restored, but in a wholly new way. Tillich went on, of course, to expand the theological horizons far beyond traditional boundaries. The traditional God that dictated the minutiae of human history was no longer believable. In fact, Tillich argued, God does not exist as a tree or mountain or table exists. God is not part of reality. God is ultimate reality. God is not a being among other beings, God is “being as such.”

Through his own experience and commentary, Camroux adds that God is also experienced in absentia, the absence of God. “My God, my God, why have you forsaken me?” Jesus asked for all of us. Camroux proposes that awe and wonder is the beginning of faith, citing Rudolf Otto’s mysterium tremendum. He adds persona, relatable mystical experiences, many in nature.

The book becomes even stronger when Camroux writes about the crucifixion and resurrection as he begins to affirm his own faith, and as his own testimony emerges. From his long and extensive experience as a parish pastor he remembers: “When I have visited the dying, I have usually found [Psalm 23] the most comforting text to have read to them, and often as I read it, they joined in.” Every pastor, including this one, privileged to be with people at the end of life, has had similar experiences.

“What is God like?” this restless, thoughtful, intellectually curious, liberal Christian asks and makes his case: “Watch Jesus confront the corrupt, watch his tenderness with the damaged and excluded, watch him offer up his life. Go and stand at Calvary and look up at the cross and hear him say ‘Father forgive them.’”

I’m glad I read this book. You will be too.

Presbyterian Outlook supports local bookstores. Join us! Click on the link below to purchase Keeping Alive The Rumor Of God, When Most People Are Looking The Other Way from BookShop, an online bookstore with a mission to financially support local, independent bookstores. As an affiliate, Outlook will also earn a commission from your purchase.

The Rev. Dr. John M. Buchanan is Pastor Emeritus of The Fourth Presbyterian Church of Chicago, Former Editor/Publisher of The Christian Century, and served as the Moderator of The 208th General Assembly of the PC(USA). He lives in Chicago.