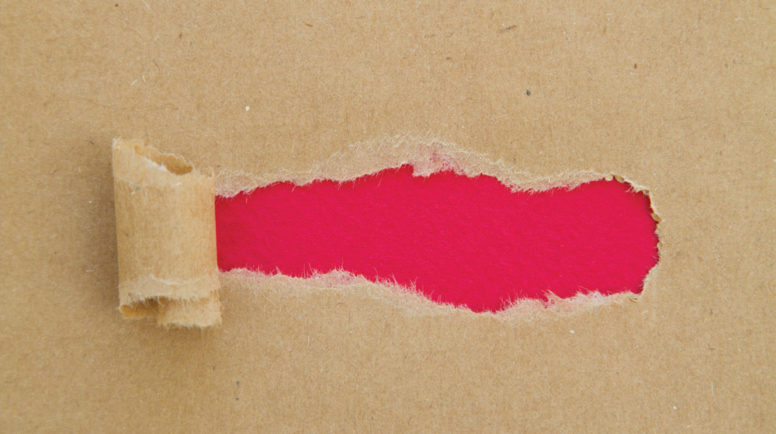 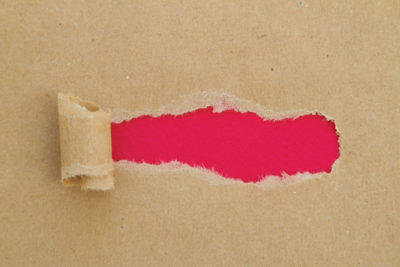 Last week, I found myself staring at a torn, yellowed page striped by paint and typeface with seven words marching down the middle. Something felt familiar.

I discovered this familiar-yet-new graphic at the Horse & Buggy Press and Friends gallery in Durham, North Carolina. It is a part of Margaret Sartor’s art exhibit “TORN: The Problem of Human Behavior,” a series of erasure poems that takes previously published texts and then, using paint, pen and other mediums, erases select words to create new meaning. As she explains in her statement accompanying the exhibit:

I began making these pieces in 2019 … an experiment in redaction (or erasure) has since become an exploration into storytelling, a personal investigation into how taking pieces of a story out of context of a larger story can create new meaning and sometimes becomes a revelation of how we see, find, and create our own stories, which is essentially, how we create ourselves.

The American Academy of Poets defines erasure poetry on their website as “a form of found poetry wherein a poet takes an existing text and erases, blacks out, or otherwise obscures a large portion of the text, creating a wholly new work from what remains.”

The Sartor print that most entranced me started as a page of “Inherit the Wind,” the famous play published in 1955 by Jerome Lawrence and Robert Edwin Lee. The whole print was a variation of gray, brown, white, tan and black lines. The title stood clearly, in capital letters, at the top. Only one other word echoed throughout: Yes!

This “Yes!” refrain was repeated four times, surrounded above and below by erased text, so that the overall effect was something like this:

Sartor chose to erase all but that evocative title and the resounding affirmation. I enjoyed wondering what she had decided to hide behind the gray paint. I scrunched in close to see if I could make out any words, but the erasure was thorough.

At home, with a quick internet search, I found the erased page. It was a crowd scene, where residents shouted responses to a local preacher:

Do we believe the Word?

Do we believe the Truth of the Word?

I finally realized why this piece had arrested me so: it reminded me of church.

The layout of alternating lines, the simple exaltation — without even realizing it, I had been drawn to something like a litany or responsive reading, unfurling behind the paint. To return to Allen and Simon’s questions, this erasure poem was using language of worship, which clearly had “done” something to me, a pastor, over the years. Sartor chose to erase all signs that a leader or a crowd was speaking. Nevertheless, somehow, I could sense that a gathering of people was there. Somehow, even in their erasure, I felt their presence.

Erasure poetry fascinates me because the making of it goes against our usual artist narratives. Erasure poetry does not pretend to create out of nothing. Erasure poetry does not demand a story of creation. It does not ask for a tale of how the words “just came, as if from thin air.” Writers of erasure poetry are acknowledging that the words are already at hand. The text already exists. It has been noticed. It has been given attention. The charge begins, not with the authority to create, but by claiming the authority to recreate, rework, reshape, reform existing words into something new.

We claim this authority each time we work with liturgy. We claim this authority each time we engage with Scripture. We might not erase the lines from the page, but we do highlight some words and background others for a time. We receive the Word and then reinterpret it, reframe it. Sometimes we might let the dramatic “Yes!” linger on the page; other times we might erase all but the questions.

Looking at the Sartor print, I think about the dramatic act of erasure that COVID inflicted on the text of our Sunday morning bulletins. I imagine all the worship leaders, like me, who have had to completely rework such worship guides, numerous times, since March 2020. Particularly in those early pandemic days, planning a worship service felt mostly like an act of erasure:


In the past 22 months, we have reconfigured our expectations around these congregational worship acts. We know that a pandemic will not stop church. We know that our words can still reach across distance, even when it feels like we’re just staring at a screen. We know that Jesus can be worshipped at any time and any place. All of this is possible. The Scripture is alive. 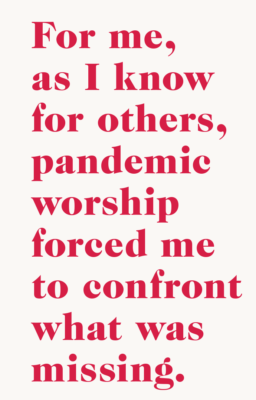 And yet, for me, as I know for others, pandemic worship forced me to confront what was missing. I could get through the week – exhaustingly, distractedly – pinging between meetings and young children, hunkering down at home, answering questions on a call, waving to neighbors at a distance. But, on Sunday, I was forced not just to acknowledge, but to linger in the physical absence of the worshipping community. No matter how strong my theology, this truth was unavoidable: the voice of the people was missing from
the pews.

This makes me return to the work of erasure poetry. Examples of erasure poets abound everywhere, and yet they all wrestle with some very compelling questions that swirl around themes of veiling and revelation: What is this act of erasure hiding? What is it revealing? And what story do these words – both erased and spoken – offer to us now?

A few years ago, I bought “Wade in the Water” by then U.S. Poet Laureate Tracy K. Smith. In the middle of the book, she has a section that highlights found poetry and, particularly, erasure poetry. Her work here deeply moves me. In “Declaration,” across seventeen lines and eighty-three words of black text, surrounded by white space, Smith fashions an erasure poem out of the Declaration of Independence. It concludes with this image:

We have reminded them of the circumstances of our emigration and settlement here.

So much is said here. So much is not said. Through her erasure, we revisit our narratives about this well-known historical document. We do not even arrive at a clear conclusion. The poem ends with an em dash. Smith has erased even our satisfaction in the period at the end of the sentence.

Smith explores found poetry in other poems, when she shares lines of letters from people who were previously enslaved. In Smith’s accompanying “Wade in the Water” notes, she writes, “Once I began reading these texts, it became clear to me that these voices in question should command all the space within my poem.” This is a key element of any found poetry — the conviction that what has been noticed is worthy of a poem all on its own.

Found poetry takes many forms. Erasure poetry is one. The American Academy of Poets describes found poetry as “the literary equivalent of a collage,” explaining that “found poems take existing texts
and refashion them, reorder them, and present them as poems.”

Smith takes the existing text of these letters and then, with refashioned line breaks, she reshapes the words into a deeply potent poem. The poem “Benton Barracks Hospital, St. Louis, Mo. September 3 1864” begins this way:

to let you know that I have not Forgot you

Found poetry, and particularly erasure, show us how to play with form, how to engage existing text with new vision. This poetic genre changes text into space and space back into statement. It dances between what is said and what is left unsaid. It can reshape and reform what we have seen so often before — or what we have failed to see.

As we live into the next season of a COVID-19 world, perhaps the church can use this time to engage some of the urgent questions of erasure poetics. The techniques of the poets empower us to look at language critically. What do our words of worship reveal? What do they try to keep hidden? What narratives and codes are embedded in our bulletins, liturgies and Scripture? What stories do these words tell about our gathered community? What are we unveiling? What are we being asked to notice anew in this moment of time?

On May 23, 2021, the worshipping community came back into the sanctuary in my worship context at Duke University Chapel. No congregation had been allowed to gather since March 8, 2020. On that morning in worship, I used the same simple phrase I have used hundreds of times as a worship leader. I stood before the congregation, held out my hands, and said, “The Lord be with you.” For fourteen months, I had said those words into an empty sanctuary, pausing for a moment in the quiet. That Sunday, the voice of the people answered, “And also with you.” Their collective sound hit me like a force. I felt as though the air was knocked out of me. Tears stung my eyes. I had to take an extra breath.

And also with you. I have seen those words tucked into thousands of Presbyterian bulletins in my lifetime, but this was the first time I felt real glory and gratitude shine around them. And also with you. Even masked and distanced, the congregation revealed something of the promise and presence of the Lord. The voice of the people had been erased from our pews. Now it had returned. And also with you.

May I never read these words the same way again. 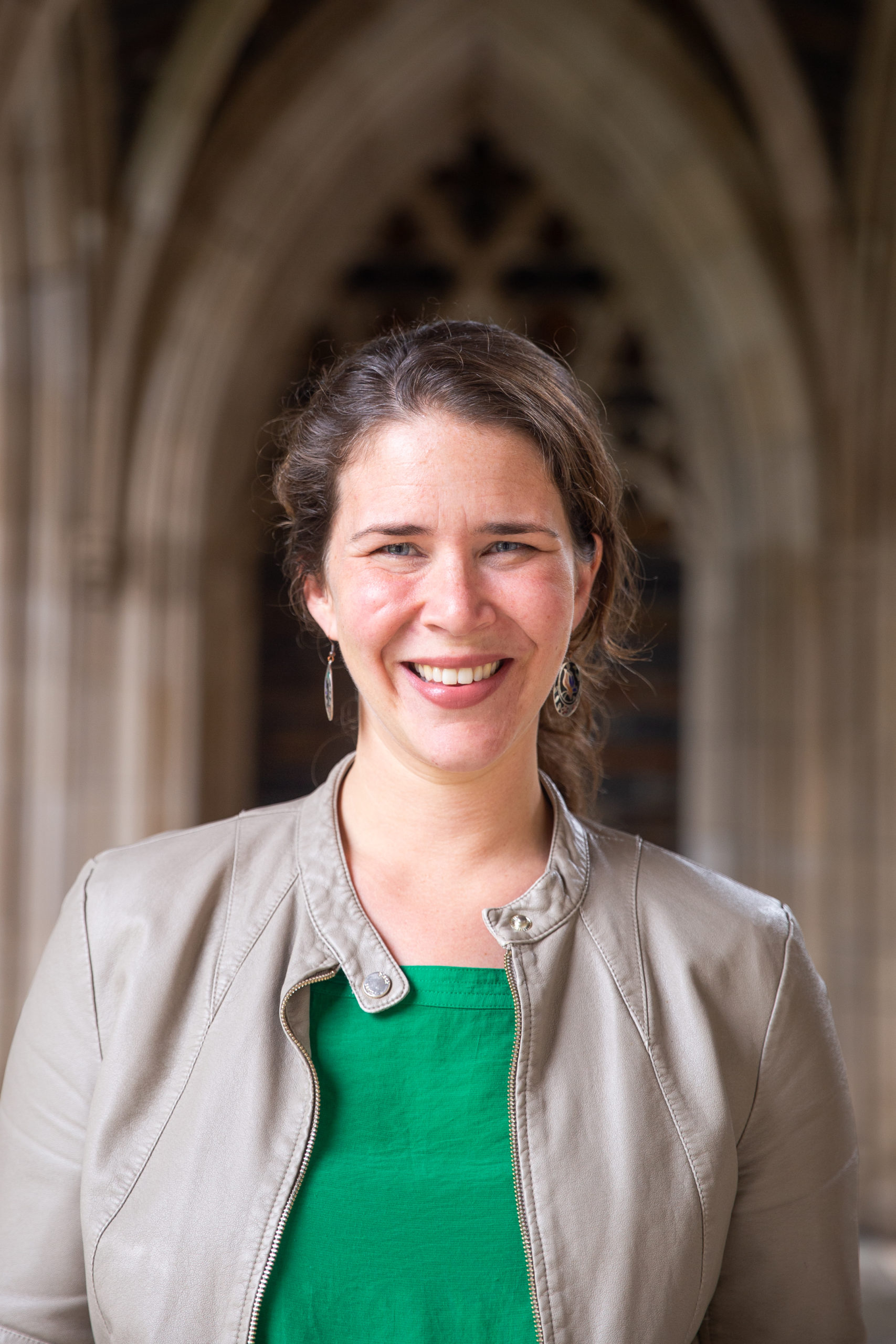 Kathryn Lester-Bacon is the director of religious life at Duke University Chapel in Durham, North Carolina. She writes and shares poems for spiritual reflection on Instagram (@pastor_poetry_practice).