Today’s problems require collective solutions, but the American church is not answering the call.

The Adam McKay satirical film “Don’t Look Up” stars Jennifer Lawrence and Leonardo DiCaprio as scientists trying to convince a distracted public that a comet is headed to destroy the planet, and it has become one of the most-watched films ever on Netflix. The not-so-subtle parable, originally a metaphor for our lack of action on climate change, takes on additional resonance in light of entire swaths of Americans rejecting life-saving action on COVID-19 and a major American political party choosing to deny the presidential election results.

I’m not here to write a movie review – some have praised its timely defense of scientists and acknowledging hard truths, others have criticized its uneven tone wavering between wanting to be as subversively biting as “Network” and as absurdly silly as McKay’s own “Anchorman” – but rather to continue the cultural conversation as to what would cause a nation to ignore crises that literally threaten existence as we know it, like climate change or COVID-19.

The film offers up as its answer a concoction of various modern targets — short-sighted, corrupt and power-hungry politicians; entertainment-driven news media; social media-driven echo chambers; idealistic and capitalistic Silicon Valley. All these factors, in their own way, distract and divert attention and resources from the collective action necessary to do the hard, right thing. They keep people seeing themselves as rugged individuals rather than a collective whose survival and flourishing are tied up in each other’s destinies. I call this aggressive individualism.

I would like to add to the conversation a
force and institution that, in its current most popular and wide-reaching form, causes incredible damage and diversion by perpetuating this form of individualism: modern American Christianity itself. 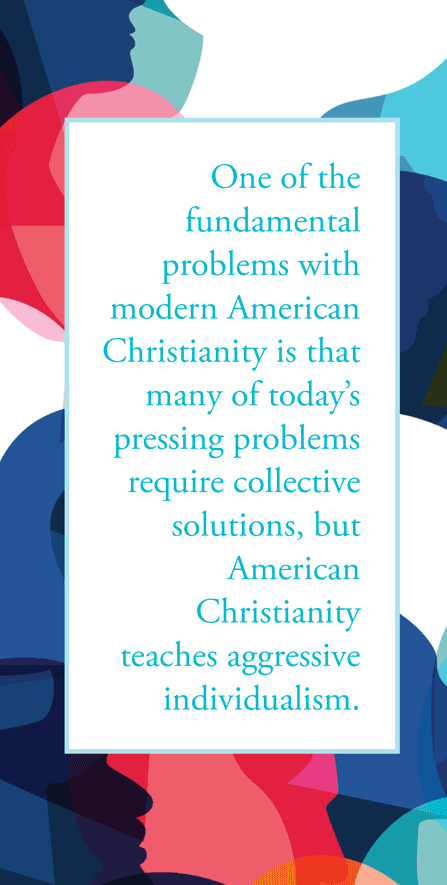 One of the fundamental problems with modern American Christianity is that many of today’s pressing problems require collective solutions, but American Christianity teaches aggressive individualism. Aggressive individualism is baked into its teaching, promoted by its leaders and assumed in its systems. The seeds have been planted for decades, accelerated in the last few years. Now we reap what we have sown.

I’ll never forget a privileged White male pastor leaning into me before a worship service and nonchalantly declaring that we should never call for governments to help their people or join collective movements for justice, and instead just call people to do individual acts of service because “Acts 2 is about local communities and Jesus never called on a country to help its poor people, only individual churches and individuals serving.”

This logic only makes sense if the call of Christians was just the individual tending of souls, the evangelization of an individualized salvation story and the preservation of an institution’s relevance to society — “the CHURCH has to be the one providing for people, not the government!” Yet these are dominant ideas that permeate modern American Christianity.

This is not an accident. The aggressive individualism of modern American Christianity is a logical extension of its collusion with White supremacy in America in which the church is an arm of White supremacist power rather than a counter-resistance. It makes sense, then, that American Christianity would incentivize its teachings and structures to disempower movements that would cause systemic change.

Many sections of the American church have become a propaganda piece for what Heather McGhee, in her book The Sum of Us, calls the narrative of the “zero-sum paradigm.” According to McGhee, the United States throughout its history has used a false “zero-sum” narrative – the idea that progress for some of us must come at the expense of others – to perpetuate White supremacy and prevent collective action that would help everyone, including White people, because Black and Brown people might benefit.

The result is a willful prevention of folks developing a collective imagination. People have not been nurtured to see collective action as love, so we cannot be surprised when they cannot make the connection between “love your neighbor” and “wear a mask and get vaccinated.” If “loving acts of service” is only giving a poor person food occasionally rather than dealing with the causes of hunger, we then leave Christians ill-equipped to see what calling for governments to spearhead energy infrastructure or massively changing corporate behavior has to do with Christian stewardship of the land.

The “aggressive” part of this aggressive individualism, of course, includes the violence committed to the vulnerable folks who are always most affected by our lack of action on collective problems like climate change and the ever-evolving pandemic. It is also aggressive in that it taps into the worst impulses of our human experience, weaponizing fear and hate in order to tear us apart. 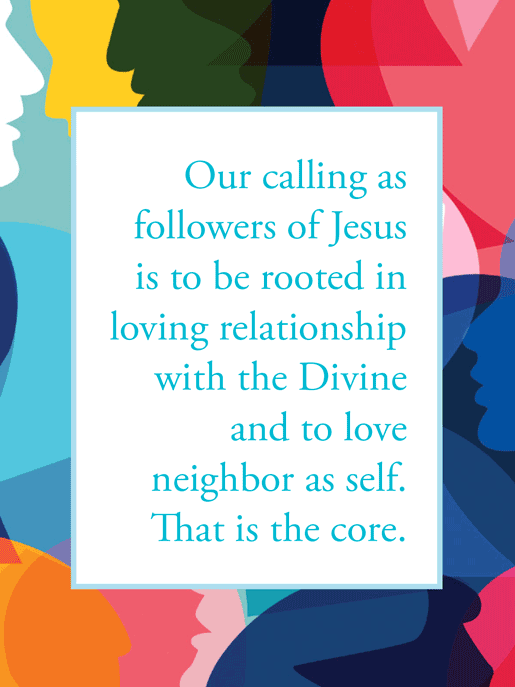 All this, ultimately, is violence to God. Our Christian tradition, with collective images for the church like a body of Christ with connected, interdependent members and temples with interconnected bricks, should have shielded us from falling into rugged individualism. Instead, we Christians in America collectively rejected it. The fact that American Christianity could become a major vehicle in our country’s individualistic deterioration is nothing short
of heresy.

At this dire point, the Christian’s call to “look up” is not simply at the metaphorical comets hurtling in our direction – though we must if we are to survive – but up at the God who tries to get us out of the mess we’ve made.

Our calling as followers of Jesus is to be rooted in loving relationship with the Divine and to love neighbor as self. That is the core. In 21st century America, that call includes the pursuit of justice and flourishing for the common good, necessarily centered on the poor and oppressed and the cries of creation itself. This is not a side project, but essential to our collective call.

Until we drastically turn away from this active perpetuation of aggressive individualism, we won’t hear the call and people will continue to die from our active harm. 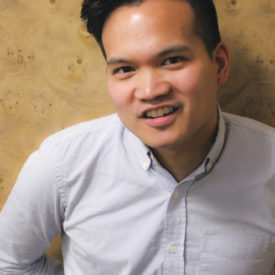 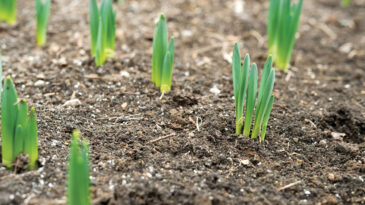