In 1972, I was 12 years old on a bus headed to Wooddale Junior High School in Memphis, Tennessee. The year before, I had attended Corry Junior High School in my neighborhood, a middle-class African American community of single-family brick homes, neatly kept yards and mostly two-parent families with strong work ethics. All of our families preached the gospel of getting a good education as a path to a secure middle-class life.

What happened between 1971 and 1972? Crosstown busing was implemented in Memphis, and I became part of the Black exodus from neighborhood schools to attend White schools across town. I was excited to start a new school, make new friends and learn, as I was studious
and quiet.

As I entered Wooddale on those first August days, here is what I saw: a newly built school with full home economics kitchens and sewing machines, a full woodworking shop, excellent athletics facilities, new desks and chalkboards in the classrooms, a well-equipped acoustic band and music room and – most importantly for me – a well-resourced library. I was so excited and so confused. I was excited because I was finally in a school that had the resources that both students and teachers needed to teach and learn. But I was confused because Corry, my old junior high school, had offered precious few of these resources: no kitchens, no woodworking shop, an old gym, a tiny and overgrown running track and a poorly resourced library.

The contrast deeply bothered me, and I tried to understand why: In this country that promotes itself as a “nation under God, with liberty and justice for all,” wouldn’t justice mean that all teachers and children have the resources they need to teach and learn? And especially Black children? Well, yes. Isn’t an educated citizenry important for the health of the nation? Well, yes. Then why was Corry – an African American school in an African American neighborhood – so criminally underresourced? And why was Wooddale – a White school in a White neighborhood – so criminally overresourced? Did these disparities have anything to do with why Martin Luther King Jr. had come to Memphis in 1968? Even though I didn’t understand the full implications of racial discrimination in public education as a 12-year-old, I knew something was very, very wrong. Those feelings continued throughout my public education as I realized that the majority of White families (98%) refused to allow their children to be bused to my majority-Black high school between 1975 and 1978 and I witnessed an increase in the White “Christian” academies populating the city during the crosstown busing years. I remember NAACP leaders protesting these injustices, but where were Black churches?

The disparities and dissonances I witnessed in my schooling took up residence in my spirit beginning with my first day at Wooddale Junior High School as a 12-year-old girl. They are still there today.

In 1996, I was hired as lead organizer to work with Bill Barnes in Nashville, Tennessee. Barnes was pastor of Edgehill United Methodist Church and a part-time organizer with the community organizing group Tying Nashville Together (TNT). From a series of house meetings within the 45 churches and synagogues that made up TNT membership, one important issue consistently emerged: the poor physical condition of our public schools. Parents complained about the lack of toilet paper and soap in the student bathrooms, as well as the lack of electrical wiring to plug in computers. Teachers were always short on supplies and staff cited dangerous working conditions. Many reported these issues to school management for years, with little to no effective response.

TNT leaders decided to conduct a facilities audit of half the Nashville public schools. We gathered, oriented and trained 150 leaders from our institutions, divided into 37 groups of four. In each group, two African American and two White leaders would audit two schools together. The racial mixing of the teams would allow Black and White leaders to work together to observe, document and make initial assessments of conditions on the ground. Each team would audit one school in a poor neighborhood and a second school in a middle- or upper-middle-class neighborhood.

In the year 2000, one of the schools my team audited was Haynes Middle School in north Nashville. The conditions in Haynes reminded me of the poor conditions I had faced at Corry Junior High in Memphis in 1972. After the Haynes school audit, our team gathered at a restaurant to debrief. While eating lunch, I broke down and wept at the conditions we had found.

After completing the audits, we compiled the findings into a 5,000-item report that 20 TNT church leaders presented privately to Nashville’s then-Mayor Bill Purcell. Purcell pledged to order a facilities audit of the other 70 public schools that we hadn’t reached, to complete all minor repairs within 90 days and to request a tax increase of $1 billion, of which $250 million would be used to repair, demolish and rebuild the schools that faced major structural issues. The tax increase passed. Haynes Middle School ended up being one of many school buildings demolished and rebuilt.

We had gone into the audit asking for toilet paper and soap in student bathrooms. We emerged with principals from the 70 unaudited schools asking us to audit their schools and with $250 million earmarked for improving our public schools. We had publicly demonstrated the best of our respective religious traditions, putting our theology into practice in a way that evangelized the city of Nashville on behalf of all public school students. It was a glimpse of religion as it should be.

Religion as it should be, based on Jewish ethics

Since those school audits and my TNT work, I’ve discovered that a Deuteronomistic framework is a useful starting point for understanding how religion should be.

Let me offer a personal contrasting example. As a child in 1968, I watched the Memphis sanitation workers’ strike unfold on television. The strike, in which Black men working for the Memphis Department Public Works called for fair wages and respect, prompted Martin Luther King Jr. to come to Memphis where he gave his famous “I’ve Been to the Mountaintop” speech. A day later, at exactly 7:52 p.m. on April 4, my television program was interrupted by broadcaster Walter Cronkite, who announced that King had been shot on the balcony of the Lorraine Motel. I was 8 years old and had no concept of racism or discrimination.

My family – Momma, Daddy, my sister Valerie and I – went to Emmanuel Episcopal Church every Sunday. I loved going to church as a child because I heard the Gospels read and preached. Jesus made so much sense to me. I learned to sing the Lord’s Prayer, and I memorized catechisms and prayers from the Book of Common Prayer through 18 years of weekly repetition. I heard the teaching in Deuteronomy 15 that there should be no poor among us, and I thought that once Christians – White and Black alike – heard these words, they would act.

So in my youthful naivete, I believed that Memphis Christians would pour into the streets to support the poor among us, including the sanitation workers who were demanding safe working conditions and livable wages that would enable them to feed their families and end their dependence on food stamps. And when King was shot, I thought that Memphis Christians would surely rise up against the assassination of their
own prophet.

However, contrary to the teachings of Deuteronomy, Memphis Christians did not pour into the streets by the thousands. In the end, the groups who stood up for the sanitation workers came down to organized labor unions, the NAACP and 150 local ministers.

Religion as it is in a capitalist society

Instead of ensuring that there are no poor among us because we are using God’s inheritance appropriately, a capitalist system ensures that plenty of poor and near-poor live among us in our communities and even in our churches. In what has been termed “low-road capitalism,” wages are depressed, and unskilled and low-skilled workers are incentivized through punishments, not promotions. Inequality reigns and poverty spreads.

For many American church leaders in particular, wages are similarly depressed, benefits may or may not exist, and working conditions are becoming ever more difficult. Further, many ministers are incentivized, through threats and coercion, to remain silent on racial, economic and social issues, despite the teachings in the Bible. And because we don’t have a robust mechanism in the church to discuss theology, ethics and economics, many congregations’ default response to wealth is to consider it God’s blessing. Meanwhile the default response to poverty is service through, for example, noblesse oblige, food banks, clothes closets, Thanksgiving baskets and temporary shelter for homeless persons. For so many churches in the capitalist model – including in the Presbyterian Church (U.S.A.) – our DNA includes anti-Black racism, an unacknowledged belief in the supremacy of Whiteness, an obsession with capital accumulation (e.g., property and endowments) and, for many, an increasing desire for limited government, both in our denominations and in our national political life.

Compare this to the Deuteronomistic discussed earlier:

A proven though imperfect way forward 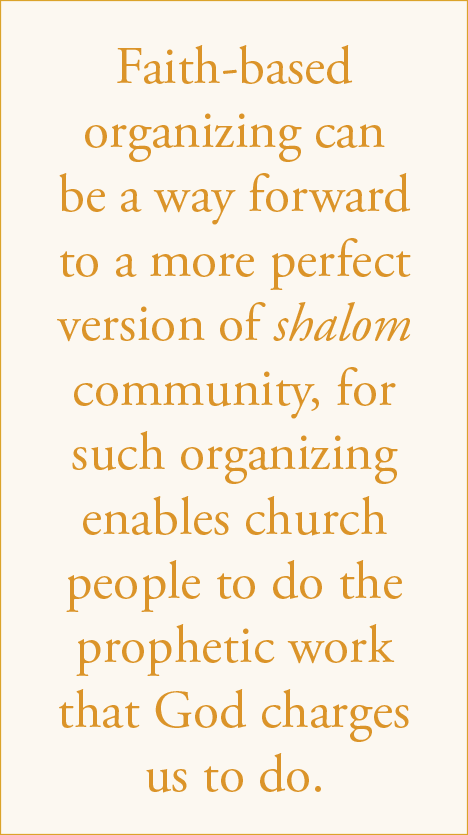 An essential element of a democratic society must be the right of people to organize in order to effectively and concretely address the grievances and oppressive conditions that they face. Faith-based organizing is the process by which institutions of equal standing (and the people within them) create their own power by coming together to address conditions they have determined to be intolerable. These institutions typically include religious congregations, credit unions, unions, associations and other advocacy groups.

Generally, a direct relationship exists between power (the ability to act) and equity. That is, the more organized power one has, the more concrete equity one can accomplish. Without power, people have no voice regarding problems like racism, sexism, police brutality and so on. With power, groups are able to document (or audit) oppressive conditions, negotiate with businesses and government to redress conditions and hold those groups accountable for changes that must be specific, winnable, time-limited and doable.

Faith-based organizing can be a way forward to a more perfect version of shalom community, for such organizing enables church people to do the prophetic work that God charges us to do. We show ourselves as church in a concrete way, on the streets, by wearing our T-shirts and hats. We do this as we walk the neighborhoods and engage people on the ground to learn about the issues that affect their lives — for example, working as coreligionists of many races and ethnicities to audit our schools and neighborhoods and document structural discriminations together. We do this around a common table of equity and justice when we put together a plan to fix it.

These pastoral ethnographies enable diverse people to initiate research and action and to see the evidence that moves us from opinion to informed judgment. This is our process of prophetic relational leadership development in advancing God’s vision of shalom community. 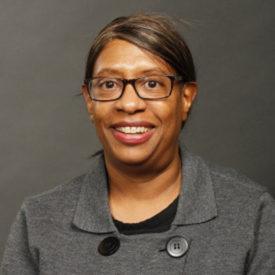