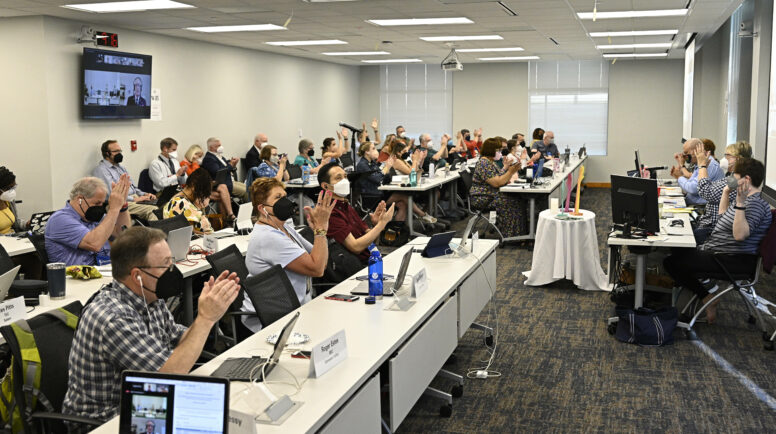 Commissioners of the Theology, Worship, and Education Committee celebrate a vote. Photo by Jonathan Watson for Presbyterian Outlook.

Louisville, Kentucky — The third day of the Theology, Worship and Education Committee looked a little bit different. Out of an abundance of caution and due to the COVID-19 diagnosis of newly elected co-moderator Ruth Santana-Grace, commissioners were spread out with additional space for social distancing. The meeting convened with a spirited devotion led by Lorraine McKenzie, a ruling elder commissioner from Philadelphia and the singing of “Spirit of the Living God.”

The business of the committee began with consideration of TWE-04: “Regarding Worship Resources for Ministering to Veterans” which calls for the Presbyterian Church (U.S.A.) to develop worship resources and other appropriate rituals that pastors and military chaplains could use to assist military personnel when they are sent for training, when they are deployed, when they return home from deployment, and when they separate from military service. Overture advocate retired Air Force chaplain David Terrinoni started the discussion as he acknowledged the military is one of the greatest mission fields for young adult ministry, stating that half of military members are under the age of 25.

He noted chaplains and pastors provide the front line of mental health support, both in the military and in the parish with veterans, so there is a huge need to have denominational resources for pastors and chaplains that help them address mental health concerns. Madison McKinney from the Advocacy Committee for Women’s Concerns offered her support, specifically calling out the issues faced by women in the military including a higher suicide rate. Teaching Elder commissioner Will McGarvey offered an amendment to include resources for people who leave service as conscientious objectors because of moral injury and added similar language to the rationale. The committee rejected it as an amendment, but voted to include it as a comment. They also accepted an amendment to include an additional comment stating, “We request that the materials also respond to the needs of first responders who are often veterans, and who incur further moral injury.” The resolution passed unanimously with the comments.

Next, the committee took up TWE-05 which proposes nine changes to the Directory for Worship in the Book of Order providing guidance for the structure, order and content of worship in Presbyterian Churches. Forrest Claassen, a member of the Advisory Committee on the Constitution (ACC) opened the discussion by laying out the recommendations of the ACC. Barry Ensign-George from the Presbyterian Mission Agency provided feedback in support of the proposed changes. Committee Moderator Joe Scrivner chose to consider the proposed changes one at a time.

The final resolution considered by the committee was TWE-06 which addresses the laying on of hands at ordination and installation services. The resolution proposed to remove the language, “Historically ordination only takes place once for each office, the laying on of hands is not repeated,” and give permission for the laying on of hands to take place at installation services even if the person has already been ordained. It also expanded who can participate in the laying on of hands by adding the language, “The moderator may invite the commission and all members of the congregation to participate in the laying on of hands for commissioning and blessing the newly-installed minister of Word and sacrament, ruling elders, or deacons.” The representative from the ACC, the Presbyterian Mission Agency and the General Assembly Committee on Ecumenical and Interreligious Relations (GACEIR) against the resolution, specifically citing various ecumenical partners and the ongoing dialogue with the Episcopal Church (USA) and how this change to the constitution could complicate those relationships. The resolution passed with the amendments proposed by the ACC to maintain the spirit of the resolution while using language that would better facilitate ecumenical dialogue.

This concluded the business of the Theology, Worship, and Education committee. The committee considered nineteen items of business, many of which had been deferred from the 224th remote General Assembly. They celebrated their work and time together as they started—with a simple worship service. The closing worship included prayer, song, reading of scripture, a ritual that included writing a word of gratitude or hope on a card and placing it in a basket and celebrating communion.