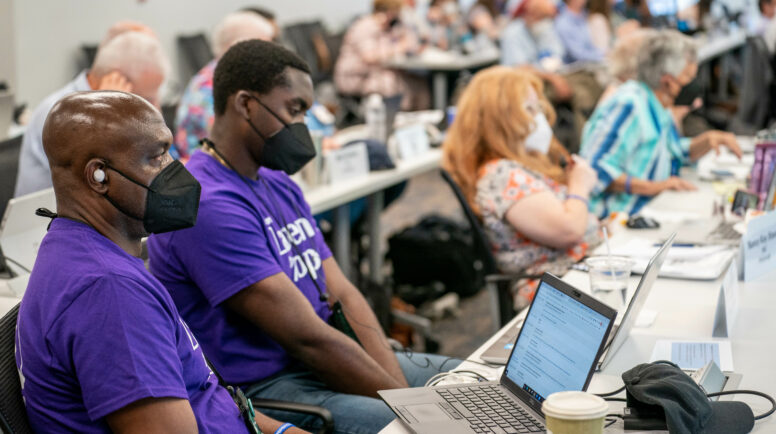 Louisville, Kentucky – The Environmental Justice Committee of the 2022 General Assembly voted decisively June 23 to approve ENV-10, a recommendation from the Committee on Mission Responsibility Through Investment (MRT) to divest from five energy companies MRTI has determined aren’t doing enough to slow the pace of global warming that’s endangering the planet.

The bilingual committee is moderated by Miguel Angel Dros Lorenzo who speaks in Spanish, with translation provided for English, Korean and Spanish speakers. On this much anticipated proposal, the committee voted 30-7 to ask the assembly to approve MRTI’s recommendations — making no changes in the report, even though several committee members raised concerns about the impact divestment could have on communities and churches in areas where oil and gas companies are major employers.

MRTI is asking the assembly to authorize PC(USA) divestment from five companies – Chevron, ExxonMobil, Marathon Petroleum, Phillips 66, and Valero Energy – saying the committee’s work to engage with these companies and encourage them to do more to prevent global warming has not made enough progress.

On June 24, the committee will consider another significant recommendation — ENV-07, an overture from Hudson River Presbytery calling for the PC(USA) to fully divest from all fossil fuel companies.

At previous General Assemblies, overtures calling for full divestment have essentially competed head-on against MRTI’s approach of corporate engagement – and for the most part, MRTI has prevailed. This year, Fossil Free PCUSA, which favors divestment, sounded the message early that the assembly could choose to do both – to pass MRTI’s recommendations (ENV-10) and the divestment overture (ENV-07).

MRTI told the committee, however, that two other proposals it will consider June 24 – ENV-01 and ENV-08 – conflict with the MRTI recommendation.

Earlier this month MRTI and Fossil Free PCUSA issued a joint letter stating that both groups agree that “the gravity of the crisis requires an urgent and robust response,” and saying “this year we have aligned on what action should be taken at the 225th General Assembly.”

This assembly’s conversation surrounding the climate change recommendations seems different. Among the points of discussion:

Another piece of the discussion: the question of impact. Both MRTI and Fossil Free PCUSA agree that climate change is an urgent global problem — disproportionately impacting those around the world living in poverty and people of color.

MRTI argues that it does its work in collaboration with the Climate Action 100+ group and that corporate engagement done in coalition with others can have a significant, amplified impact. Divestment is the last step — an action taken only when companies refuse to respond with measurable action. “When we walk away, we lose that influence,” but the action represents PC(USA) theological values, Allen told the committee.

At the same time, however, divestment by the PC(USA) has its limits. “If we sell those stocks, it’s not going to be that material to the company,” said Lindley DeGarmo, MRTI’s vice chair. “It’s got its limits, for sure.”

Presbyterians concerned about the impact of climate change – so evident already around the globe – are looking for other ways too to make an impact.

Several committee members spoke of the pain that comes when the PC(USA) divests in a company their community depends on. “As a pastor in a small town that’s basically a one-industry town … it would wipe us out,” said Nathan Sobers, a ruling elder from Kendall Presbytery in Idaho. “This will chase companies away from towns where it is the only source of livelihood.”

Peggy Casteel Huston, a minister from the Presbytery of Lake Michigan, said she has a colleague who lost her job after the PC(USA) divested from one company. So many people who worked for the firm left the church, it could longer afford to pay the pastor’s salary, Huston said. “Is there maybe some other way we can accomplish what we’re hoping to without doing all the negative,” she asked — perhaps by investing in climate-friendly companies?

Bill Core, a ruling elder from Palo Duro Presbytery, admitted, “I’m heavily prejudiced towards the oil and gas company”— he owns a business that has employed many people in the industry. As they say in West Texas – the land of many football analogies – “my personal belief is the PC(USA) is throwing outside of its coverage.”

Fohr responded that MRTI works hard to stay in communication with congregations and presbyteries in regions that rely heavily on the oil and gas industry.

Here are the other items the Environmental Justice committee took up on its first day of deliberations.

Carbon offset program. The committee voted 35-1 to approve an amended version of ENV-04, which would provide a way for Presbyterians to donate to a fund to offset the carbon impact of work-related air travel by Presbyterian Mission Agency (PMA) employees.

That action also would:

Jed Koball, a missionary advisory delegate serving in Peru, spoke of the importance of “holding ourselves accountable for our own behavior” — pointing out that 21 of the committee members reported they flew to this meeting.

Mamisoa Rakotomalala, an ecumenical advisory delegate from the Church of Jesus Christ in Madagascar, said of her country: “We have been impacted by drought and by cyclone,” driven by climate change. Funding from the Presbyterian Hunger Program has been vital, she said, to train pastors in a program whose theme is “plant a tree, save a life.”

Reduce carbon imprint. The committee voted 32-3 to approve ENV-05, which calls on the PC(USA) to reduce its carbon imprint by 25% over the next four years. Part of that work: the recommendation asks PMA to survey PC(USA) buildings in 2023 to estimate the denomination’s current carbon footprint, and to repeat the survey in 2027. Rebecca Barnes, of the Presbyterian Hunger Program, said it’s possible to estimate the carbon footprint of buildings just by knowing the square footage of a building, and carbon footprint calculators are available online.

The intent is not to be punitive towards smaller congregations with limited resources or those with older buildings, said Jessica Maudlin, who also works with the Presbyterian Hunger Program. “We can each do our part,” in some way.

Diversity of creation.  The committee voted 32-3 to approve ENV-11, asking the PCIUSA) to endorse the goal of protecting 30% of lands and waters by 2030 as a way of protecting the diversity of creation. In January 2021, President Biden signed an executive promising to conserve at least 30% of U.S. lands and waters — known as the 30X30 vision. This overture, from Heartland Presbytery, lays out ideas for how Presbyterians can be involved in that work, in part by advocating for Indigenous sovereignty and treaty rights.