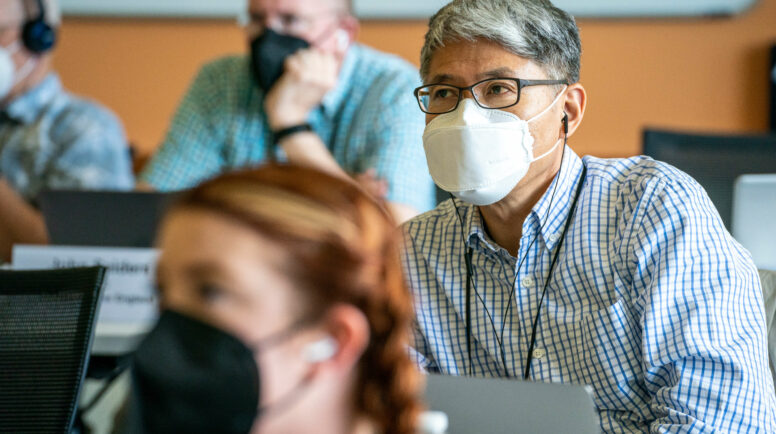 Jun Mo Jeong (TEC-Sheppards And Lapsley) listens to testimony in the Addressing Violence in the USA Committee. Photo by Gregg Brekke for Presbyterian Outlook.

Louisville, Kentucky — Day two of the Addressing Violence in the USA Committee started with prayer and Scripture. The committee then initiated a full day of conversations on gun violence around the following resolutions:

VIOL-01: Regarding Our Commitment to Gun Violence Prevention

VIOL-05: On Advocating for Reduction of Firearm Violence

Sue Trigger, a member of ACSWP and ruling elder from Overland Park, Kansas, started the conversation by sharing a summary presentation of VIOL-07. She shared a number of statistics and graphics including the following:

The increase in firearm sales over the last 20 years:

The number of mass shootings:

The security response of churches:

References to God in the “American Rifleman,” the official journal of the NRA:

After this presentation, the ecumenical advisory delegate from Rwanda, Jérome Nkumbuyinka Bizimana, shared his perspective stating, “We lived through genocide in my country and every day we hear stories of murder, but sometimes the church is silent. What I appreciate is that the Presbyterian Church is talking about this issue of gun violence. I will take this conversation back home and hopefully, it will inspire my church to be courageous.”

Following a full morning of conversation including additional presentations from Jimmie Hawkins, the director of the PC(USA) Office of Public Witness in Washington D.C., the committee decided that all three resolutions were related and had individual strengths. They approved an alternate resolution that was structured around VIOL-07 while pulling language from VIOL-01 and VIOL-05 and added additional language that provided greater clarity around suicide and intimate partner violence, as well as the impact of gun violence on youth and mental health. Once the alternative resolution passed, the committee voted that VIOL-01 and VIOL-05 were answered by the alternative resolution.

Following this, the committee took up VIOL-11, a commissioners’ resolution, “Directing MRTI to Place Gun-Related Companies on the Divestment List” which directs Mission Responsibility Through Investment (MRTI) to suspend the corporate engagement process of their investment policy in order to immediately place all companies engaging in the manufacture, sales and retail/distribution of firearms and components (such as bullets, etc.) on the PC(USA) Divestment List, no matter the size of the companies, public or private, or types of firearms and components in question.

Gusti Linnea Newquist and Christine Caton, the commissioners who submitted this resolution, spoke and gave impassioned pleas for why Presbyterians shouldn’t profit off of firearms sales. Firearms manufacturers are currently already on the divestment list, but this proposal would extend to retailers including sporting goods stores and department stores that sell firearms.

Various people from the denomination responded including representatives from MRTI, the Board of Pensions and others. They spoke about the MRTI process of engagement based on the “General Assembly Divestment Strategy: Principles and Criteria Policy” which was approved by the 196th General Assembly in 1984. This policy includes seven criteria that need to be met before a divestment recommendation can be made. They encouraged the committee to follow the process that any recommendation for divestment proceed through specified channels to meet the minimum requirements. To do this, they recommended that the committee consider amending the resolution to reflect the established divestment process.

The committee amended the resolution largely following the advice and counsel submitted by the Advisory Committee on Social Witness Policy (ACSWP) to direct MRTI to engage with Walmart, Dick’s Sporting Goods and Kroger, three publicly traded retail companies held by either the Board of Pensions or Presbyterian Foundation, that sell guns not classified as semi-automatic and assault-based weapons. Kate Carter from MRTI explained that those three companies are the only three publicly traded companies in which the PC(USA) has investments that sell firearms and ammunition. The resolution was passed with these amendments.

The committee closed in worship, framing their time together as an ongoing conversation with God.