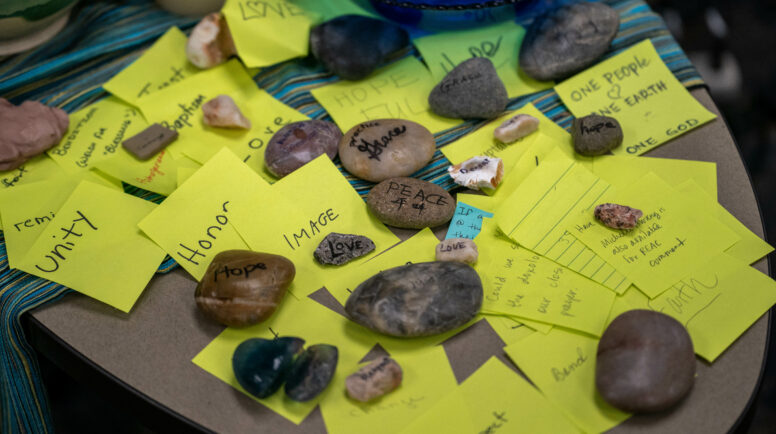 Louisville, Kentucky — For the Immigration Committee of the 2022 General Assembly, prayers during morning worship June 28 were drawn heart-wrenchingly from breaking news: reports that at least 51 migrants found had died, discovered in a sweltering tractor-trailer found abandoned on the outskirts of San Antonio.

Before this information reached the committee, those planning worship already were planning to commemorate the migrants found dead in a truck on May 14, 2003, in Victoria, Texas, one of the worst migrant-smuggling tragedies in U.S. history — 19 of the 70 people discovered in the truck bound for Houston died that day.

Now, they added prayers for those who had just perished — men and women, immigrants from Mexico and Central America.

At the start of the meeting, Moderator Ginna Bairby informed the committee members what had happened and said: “I imagine each of you is as heartbroken and horrified as I am to hear this story. Please feel that heartbreak, that horror, and that rage. Let it take your breath away. Let it move you to tears. Holy anger and grief are the fire that makes our work possible. Let’s conduct our business today with renewed commitment to the urgency and importance of this work.”

For the rest of the day, the committee wrestled with questions of how the Presbyterian Church (U.S.A.) can work for justice for immigrants, refugees and asylum-seekers. What’s already being done? What more can be done? What are the opportunities for congregations and presbyteries?

Some of the conversations involved the intersections of immigration and race.

Susan Krehbiel, the associate for refugees and asylum with Presbyterian Disaster Assistance (PDA), pointed out that in the first six months of this year, Presbyterians donated $8 million to assist Ukrainian refugees. That’s 40 times the amount given over the last decade for any other refugee or immigrant group, many of whom are people of color.

“There have been and continue to be refugees of color from all parts of the world who have not received the type of preferential treatment nor the groundswell of support monetarily that has been given to Ukraine in the last six months,” said Catrelia Hunter, a ruling elder from Salem Presbytery.

Sanctuary and accompaniment (IMM-06): A key vote involved a resolution asking the General Assembly to declare the PC(USA) to be a “sanctuary and accompaniment” church. By a 36-3 vote, the committee passed an amended version of that resolution — but only after some commissioners raised concerns about whether some congregations would object to language in the resolution saying that the PC(USA) encourages congregations, mid councils and members “to support immigrants, refugees, asylum-seekers, and their children, and to resist efforts by the government to separate families.”

The committee debated this language. Carson Brown, a young adult advisory delegate from Peace River Presbytery proposed removing some of the more “strict, top-down” language. That way, congregations might see the resolution as more invitational. Janalee Kosowski, a ruling elder from East Iowa Presbytery, said “words like ‘resist efforts by the government’ are not going to be embraced by my congregation. In fact, we may lose members” with that language.

“We have to think about the perception” — with congregations more likely to participate in the work if they think they have a choice, said Julie Allport, a ruling elder from Donegal Presbytery. “Remember that thing about catching more flies with honey than with vinegar?”

Other commissioners, however, argued for strong language declaring the PC(USA) to be a sanctuary and accompaniment church.

“I think we are called to protect the vulnerable, the voiceless, and we are called to be a prophetic church,” said Neddy Astudillo, a Latina minister from the Presbytery of Tampa Bay who said the resolution would provide important support for the immigrants in her congregation. “Who are we protecting” by using softer language, she asked?

“It’s so important that we as a national church stand up — that we have a voice,” said Jean Demmler, an overture advocate from the Presbytery of Denver. The resolution allows the PC(USA) to “speak as a national church as to who we are” – to speak prophetically – and invite congregations and presbyteries to decide whether they want to take a stand and join the work, said Ellen Johnson Price, a minister from the Presbytery of Yukon.

“As a Black woman, the immigration laws that we have been talking about we all understand to be disproportionately impactful to Black, Indigenous and people of color,” said Kymberlaine Banks, a ruling elder from Grace Presbytery. “The need to protect those we know to be vulnerable shouldn’t be watered down with grains of honey. This isn’t about the honey. This is about people’s lives. 50 people are dead in the state I live in today.”

The work is deeply contextual — varying significantly depending on your community, Craft said.

Geoff Browning, an overture advocate from First Presbyterian Church in Palo Alto, California, said his church has helped immigrants with housing, language classes and transportation. The work of accompaniment and advocacy can include monitoring immigration court; going with asylum-seekers to court appearances or appointments with immigration officials; helping them “find their way through this maze of the bureaucracy of our system of immigration,” Browning said.

PDA provides resources for congregations wanting to be involved in refugee resettlement or accompanying asylum-seekers. And the decision by a church to offer sanctuary is “always the last” in a series of efforts to help those facing deportation, Waggener said. “It’s not an easy decision to make. There could possibly be legal ramifications. … It is a big deal.”

Other points made in the conversation:

On the treatment of refugees (IMM-08): The committee voted to encourage PC(USA) officials to continue advocacy work showing welcome for refugees. It added language to the resolution to encourage the stated clerk, the Office of Public Witness, and the Office of Immigration Issues to advocate for the end of family separation for detainees and the use of for-profit detention facilities

The resolution also calls on the assembly to increase the budget for this work by $250,000.

Supporting justice work (IMM-09): The committee voted to approve a resolution from the Racial Equity Advocacy Committee (REAC) to support PC(USA) justice work on behalf of immigrants and refugees.

The resolution encourages continued collaboration between the Office of the General Assembly and the Presbyterian Mission Agency (PMA) to strengthen the work, including cooperatively with ecumenical and interfaith partners along the U.S.-Mexico border. The committee added language to state that “this includes partners who are working in countries of origin” – the homes that migrants leave – and the countries through which they pass to reach the United States.

And it asks the assembly to direct REAC and the Advisory Committee on Social Witness Policy to “create a comprehensive policy report with recommendations addressing the continued justice concerns faced by those seeking to enter the United States via the southern border,” bringing that report to the assembly in 2024.

Having addressed all items on its docket in the first two of three days allotted, the Immigration Committee adjourned, forwarding its recommendations to the full body of the General Assembly meeting in online plenaries July 5-9, 2022.