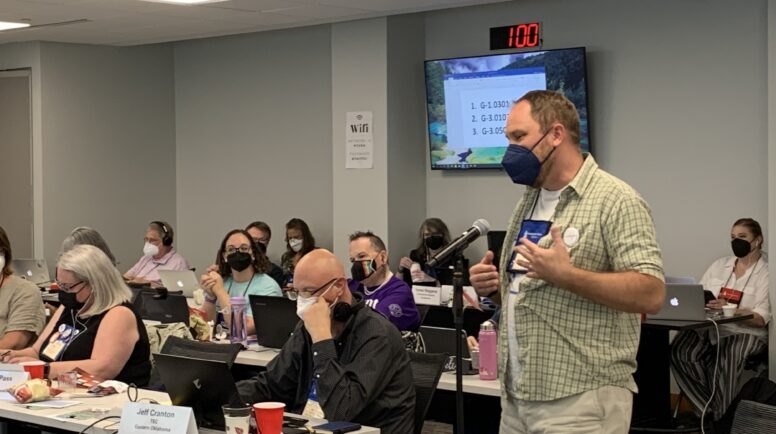 Peter Martin, a minister from the Presbytery of Philadelphia, spoke June 20 to the assembly's Polity Committee. Photo by Leslie Scanlon.

Repeatedly in recent years, presbyteries have sent overtures asking for the ability to move ruling elders into leadership in nontraditional ways — in part, to serve the needs of small congregations that can’t afford full-time pastoral leaders, and of new worshiping communities and immigrant congregations.

Presbyteries have asked, and the General Assembly has repeatedly said no, to attempts at broadening the pathways for ruling elders to move into leadership.

This time, the Polity Committee of the 2022 General Assembly voted 16-15 on June 20 to recommend the assembly disapprove a proposed constitutional amendment submitted by the Synod of the Northeast that would have allowed congregations to “elect members as ruling elders to exercise spiritual leadership in a broader sense, in other specific capacities including service in higher councils, without the requirement that they first serve a term on the session.”

The rationale says the proposed amendment would provide needed flexibility and could open doors for those not able to serve under the current rules, including the spouses and children of pastors, Christian educators and other church employees, and leaders of new worshiping communities and immigrant fellowships.

But some committee members and the Advisory Committee on the Constitution (ACC) raised concerns. “The desire to be innovative and inclusive does not require this particular constitutional amendment,” said Judy Woods of the ACC. “It’s already possible,” particularly if sessions revise their bylaws when problems emerge.

Jeff Cranton, a minister from Eastern Oklahoma Presbytery, said “this completely gums up our polity,” while not providing a clear line of authority connecting a ruling elder to the session. “Who are they then accountable to?”

The practice of serving at the session-level first “prepares us for other things,” said Fred Powell-Haig, a minister from the Presbytery of Tropical Florida. “Elders and deacons need to be discerned by the community that knows them best.”

Those supporting the overture, however, made the case there’s not enough flexibility as things stand now. JyungIn “Jenny” Lee, a former moderator of Presbyterian Women and a longtime member of a Korean church, said as an overture advocate the proposed change would “open the door to people who have traditionally been left out and sidelined.”

Lee said she was previously nominated to serve as a General Assembly commissioner, but “although I was so thrilled and grateful, I was not able to accept the honor because I was not an elder” at that time.  That was 12 years ago, and “we are still in the same spot,” Lee said. “We have not moved an inch or made a path through.”

Commissioner Paula Steinbacher, a minister from Denver Presbytery, asked how a new worshipping community or immigrant fellowships could ordain a ruling elder if they aren’t chartered as a church or don’t have a session.

Those communities could collaborate with nearby churches and partner with them so the elders could be elected through the session of those churches, said SanDawna Ashley, transitional synod leader of the Synod of the Northeast. “It does fit with our theology of sending forth our leaders to serve.”

In other business, the polity committee approved a proposed constitutional amendment that would revise language in the Book of Order to move towards more gender-neutral terms and to specifically add the word “abilities” in a list of those to whom the church shows openness.

Instead of saying the church “strives everywhere to testify to Christ’s embrace of men, women and children,” the proposed amendment would refer to “Christ’s embrace of all people” — a revision Madison McKinney, co-moderator of the Advocacy Committee for Women’s Concerns, said would be more welcoming of non-binary and transgender people.

The proposal also recommends disability be included in future lists of marginalized people in policy, procedure and liturgy.

Peter Martin, a minister from the Presbytery of Philadelphia, argued for separating the votes on gender-neutral language from those on disability — saying “we’re biting off more than we can do by packing everything together in one motion,” and risk having the language regarding disabilities voted down on the assembly floor.

But Kate Stoops, a Young Adult Advisory Delegate from Seattle Presbytery, spoke in favor of the proposal saying, “this is one of those moments when we are called to make a choice that creates a safe space.”

The committee voted 27-2 to recommend the assembly approve the proposed constitutional changes.