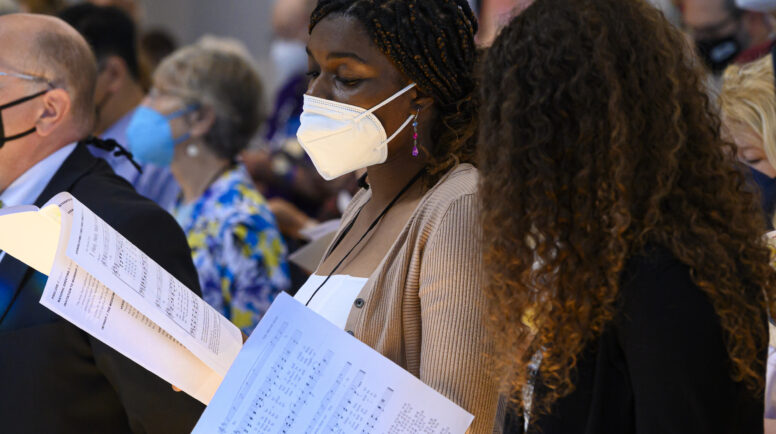 Juneteenth Worship in the chapel at the Presbyterian Center at GA225. Photo by Jonathan Watson for Presbyterian Outlook.

Louisville, Kentucky — On Sunday, June 19, the 225th General Assembly started its second full day with a Juneteenth worship service held in the chapel of the Presbyterian Center and attended by approximately 100 people including commissioners, staff, tech crew and musicians. The service was also streamed live, where around 300 people joined.

Juneteenth commemorates the day the news of emancipation reached the enslaved people in Galveston, Texas, in 1865 and they were finally freed from slavery. Since then, it has grown as a celebration of African American history and culture throughout the United States, with the descendants of slaves recognizing it as their Independence Day. In June 2021, Juneteenth National Independence Day became a federal holiday.

In addition to being the Sunday morning worship service for the 225th General Assembly, the service was listed as the official closing event of the Juneteenth Jubilee Celebration for the host city of Louisville, Kentucky.

Like all General Assembly events, the worship service was held in a hybrid format with liturgy and song presented in-person and via prerecorded video. The worship service opened with a prerecorded video greeting from Greg Fischer, the mayor of Louisville. He talked about the Juneteenth celebrations in Louisville and thanked the Presbyterian Church for being a good partner with the city in its work of racial justice and reconciliation. He referenced the tragic 2020 death of Breonna Taylor in Louisville and said the event brought a new focus to the importance of Juneteenth. Fischer talked about his work with ecumenical and interfaith leaders who are collaborating with the city on racial justice issues. He stated he was proud the denomination has had its headquarters in Louisville for more than 35 years, saying the PC(USA) is known as a champion for social justice, working to ensure everyone is treated fairly by all, which fits well with the city of Louisville’s goals to be a compassionate city.

Following the mayor’s greeting, a prerecorded Call to Worship was spoken in Ghanaian Twi with English subtitles connecting to the “Lament and Hope” theme of the 225th General Assembly with the words, “We gather in faith, lamenting for all that is piercingly broken, lost, dismissed, or stolen. We gather in faith, hoping for all that God will beautifully redeem and make new.” After the call to worship, the Good Shepherd Collective offered a video choral introit of a song called “The Medicine” which continued to weave the themes of lament and hope into the service and reflected on the need for God with the repeated refrain, “We need you now.”

Next, Lenore Williams, a ruling elder from East Liberty Presbyterian Church in Pittsburgh, offered a narrated video exploration of Juneteenth which provided context for the establishment and celebration of Juneteenth. This was followed by a prayer for the people led by Dianna Wright, the director of Ecumenical Relations for the Office of the General Assembly, and the opening hymn, “Holy, Holy, Holy! Lord God Almighty,” sung with gusto by those gathered in the chapel.

The Call to Proclamation and Assurance of Remembrance offered a reminder to those gathered that they must not remain silent in the face of injustice and that their faith compels them to “Question practices of exclusion, domination, and condescension.” These prayers were led via video by pastors from the Presbytery of San Francisco interspersed with sung responses of the hymn “Pass me not” by Fanny Crosby.

The Scripture read for the service was Isaiah 6:1-8 which tells Isaiah’s call story with the seraph touching the lips of the prophet Isaiah with a hot coal. The Scripture was read in Swahili with English subtitles. Following the reading of the Scripture, Phillip Morgan from Mid-Kentucky Presbytery sang “Lord I’ll Go,” a traditional spiritual.

J. Hebert Nelson, the stated clerk of the Presbyterian Church (U.S.A.) preached a sermon entitled, “Juneteenth” reflecting on Isaiah’s call story and comparing it to what church leaders are currently facing in today’s uncertain times. He said Isaiah had achieved success and was on his way, moving toward the top when God gave him a detour. Nelson said, “We can relate. If you’ve ever preached a sermon, led a congregation, or dealt with people in a Session meeting, you know what that means … You have to grapple with what it means to hold on through the vicissitudes of life, the struggles. When the joy turns into sorrow and your brokenness and pain begins to overcome.” Nelson said at these times, you have to turn back to God and say, “Not my way Lord, but yours.”

He reflected on what this means, not just for local churches but for the denomination, saying, “The power of faith right now in the Presbyterian Church (U.S.A.) is to recalibrate who we are; to come to terms with what it means to be grounded in the faith in this present age, for the Lord’s will to be fulfilled. The pandemic has wiped away everything we thought and encouraged us to get on our knees all over again. In the moments when we have to declare that we don’t have the answers anymore. That’s where we are in this moment. Uncertainty, still. Here in the midst of this, we are finding ourselves as representatives of the church of Jesus Christ and the Holy Ghost continues to work on us. We lament; we labor; we struggle; we come upon uncertainty … I believe the church of Jesus Christ is there right now, not just Presbyterians but the church, we are there. And we are going to have to labor there for a while … This is where I see and I hear the voices of the church and the congregations, and the internal struggles of what it means to now be innovative. And that’s a challenge for a denomination with a lot of rules. That’s a challenge for ‘decent and in order,’ because we’re living in disorder. It’s a challenge when we’re the frozen chosen … It is time for us to see differently and live differently in the life of the church: To be innovative; To be willing to try; To be willing to fail, get back up, dust ourselves off, and try again.”

Nelson said, “As Presbyterians, we’ve been blessed in many ways. So how can we let children go to school every day and let them come out without a high school diploma and how can we see people dying on the vine without a job when we know where the jobs are … It is the job of the mainline churches to do something about this. Grace has abounded, we have been blessed in so many ways, and we’ve been given opportunities that we don’t even deserve. I’m not saying that we are currently doing nothing, I’m saying we have to go deeper … We are in some turbulent times right now in the United States and the world. We are respected, we can get into high places and talk to people who others can’t. The question is: Do we use that for the betterment of humankind?”

He said it will take courage, faith and a willingness to take big risks. He concluded by saying, “We must take seriously the charge that Christ Jesus has given us; to be transformers of the present reality. How does it start? By grace. I know what I have to do for the Lord because I know what the Lord has done for me. We need more faithfulness and more lovingkindness; that should be our brand. That should be what we are known for.”

After the sermon, a spoken word offering was shared by Glenn McCray and Denise Anderson titled, “Sonrise,” followed by a response song in Zulu and English entitled “Thuma Mina” which means “send me.”

The service concluded with the hymn “Lift Every Voice and Sing” by James Weldon Johnson and  J. Rosamond Johnson, often referred to as the Black National Anthem. Following the hymn, a benediction in Ghanaian Twi connected back to the Call to Worship. Nelson closed the service with a charge saying Christians are called to lay down their lives for their friends and “Our theology tells us that anyone we come into contact with on the face of the earth is our friend, so we’ve got work to do.”