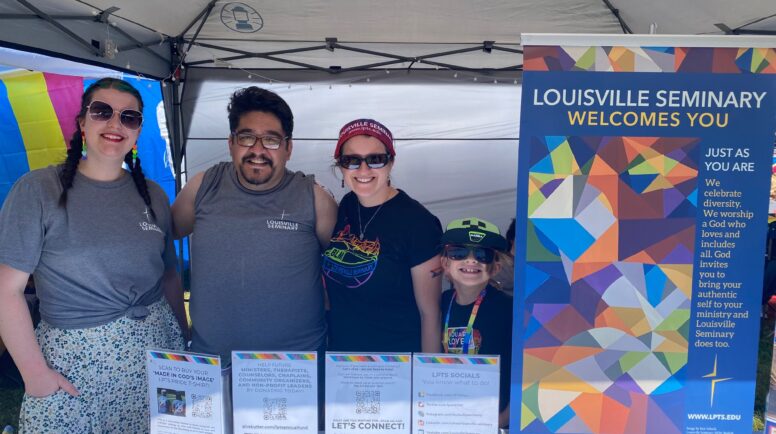 Louisville, Kentucky — On Saturday, June 18, the 225th Presbyterian General Assembly kicked off at 100 Witherspoon Street in Louisville, Kentucky. At the same time, the Louisville Funk Fest was taking place a few hundred yards away on the Great Lawn as a part of Louisville’s 3rd annual Juneteenth celebrations, and a quarter-mile past that was the Kentuckiana Pride Festival on the Big Four Lawn.

As commissioners at the General Assembly participated in opening worship and elected new co-moderators, Louisvillians celebrated Black culture at the Juneteenth Funk Fest and participated in one of the largest LGBTQIA+ events in Kentucky.

What do these things have in common? While the Presbyterians have a reputation for being the “frozen chosen,” it turns out the work of the national church happening at the bi-annual General Assembly has a direct connection to the Juneteenth celebrations and the Pride Festival.

The Presbyterian Church (U.S.A.) has worked closely with the city of Louisville on the issues of racial justice and reconciliation, both within the city and around the country. This came into sharp focus on Sunday at the Juneteenth worship service that was part of the 225th General Assembly and the official closing event of the Juneteenth Jubilee Celebration for the city of Louisville.

The worship service included a video greeting from Louisville Mayor Greg Fischer who thanked the Presbyterian Church for being a good partner with the city of Louisville in its work on racial justice and reconciliation. In his remarks, he also referenced the tragic death of Breonna Taylor in 2020 and talked about his work with ecumenical and interfaith leaders who are working together with the city on racial justice issues, particularly PC(USA) Stated Clerk J. Hebert Nelson.

Beyond the direct connection to the local Juneteenth celebrations, there is a larger link between the work of the 225th Presbyterian General Assembly and the racial justice and reconciliation issues at the core of Juneteenth. This year several items are being considered by the Race and Gender Justice committee including resolution RGJ-08: Offering an Apology to African Americans for the Sin of Slavery and Its Legacy. This resolution builds on many resolutions that have been passed in previous years and echoes resolutions passed by other Christian denominations including the Southern Baptist Convention, which passed a resolution denouncing racism and apologizing to African Americans for its history of supporting slavery and advancing segregation.

Another resolution with similar themes of racial justice and reconciliation is RGJ-10: Resolution on Race, Reparative Justice, and the PCUSA, as well as RGJ-11: A Resolution on Racism as a Public Health Crisis, among others. The work of this committee draws a profound link between the General Assembly and Juneteenth.

Another between the work of the Kentuckiana Pride Festival (KPF) and the work of the 225th General Assembly was Louisville Presbyterian Theological Seminary’s (LPTS) booth at the festival staffed by several faculty, staff, and students of the seminary including Marcus Hong, professor of practical theology. Hong helped lead the opening worship at the General Assembly on Saturday, June 18 at 11:00 a.m. and then spent the rest of the afternoon at the Pride Festival, greeting people and handing out materials for LPTS with his family.

In addition to this direct link, there is a connection to the work being done in committee at the General Assembly and the mission of KPF of promoting social, economic, and health equity of Kentuckiana’s sexual and gender minorities. The Race and Gender Justice committee is considering several resolutions that reflect the mission of KPF including RGJ-04: A Resolution for Transwomen of Color.

The resolution directs the Presbyterian Mission Agency, through the Office of Public Witness, to continue to advocate boldly for the rights of transgender women of color. It also encourages the passage of The Equality Act and to work to provide education on how Presbyterians can advocate against anti-trans legislation as well as a call to direct the six agencies of the Presbyterian Church (U.S.A.) and the Administrative Services Group of the Presbyterian Church (U.S.A.) to include in all job postings a commitment to being not only an Equal Employment Opportunity Employer as defined by the U.S. government, but with the inclusion of gender identity and sexual orientation as well.

Real-world problems and issues are being addressed by organizations in Louisville like KPF and Juneteenth, and the 225th General Assembly of the PC(USA) takes those problems and issues seriously and is seeking to address them through resolutions being considered by commissioners. While the General Assembly may not include a lot of funk music or a multiplicity of flags representing the LGBTQIA+ community, Presbyterians will address issues these community gatherings and organizations are advocating for in their own way at this year’s General Assembly.