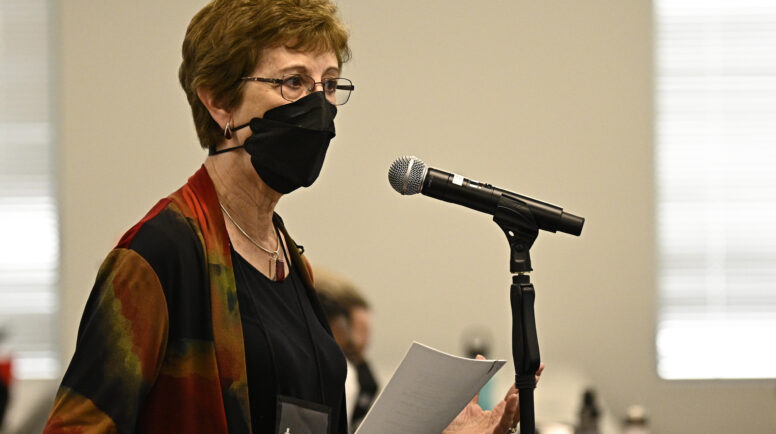 Recognizing the importance of the Book of Confessions and the process by which a confession is added, the Theology, Worship, and Education committee restarted their work on Tuesday morning by taking up three overtures that call for adding a new confession, TWE-01, TWE-08 and TWE-13. TWE-13 proposed a fully written new confession entitled, “A Confession for Such a Time as This” from the Synod of the Northeast. TWE-01 and TWE-08 both propose a process to write a new confession to be added. The committee heard from many overture advocates and resource persons and held a robust debate about both the potential content of a new confession as well the process for writing a new confession. Parliamentarian Bronwen Boswell explained the process for how a confession is written and adopted, including a personal story about her small church in rural Kansas providing feedback on the “Brief Statement of Faith” in the 1980s that was included in the final draft.

After conversation and breaks that allowed committee leadership to organize the recommendations, the committee voted to amend and functionally combine the three resolutions into one using the correct language and processes for writing and adding a confession to the Book of Confessions. They also added three comments commending and recommending the work of the Synod of the Northeast had already done on the confession submitted and ensuring the committee that will oversee the drafting of the new confession has appropriately diverse representation.

The committee then received a report from the Presbyterian Publishing Corporation (PPC) TWE-INFO, “Presbyterian Publishing Corporation Agency Summary 2022.” Cynthia Campbell, the chair of the PPC, introduced the report stating, in part, “There are people in this world who want to ban books. We believe that books change lives. I imagine that each of you have been changed by a book, a Sunday School lesson, a sermon, a hymn, a prayer. Our calling is to be the stewards of these resources and make them available.”

PPC showed a video and PPC President David Dobson shared follow-up remarks that included the PPC’s commitment to anti-racism work stating, “We have committed ourselves to be an anti-racist organization. We are living into this by providing educational opportunities to our staff, including one-on-one coaching with trained experts; increasing the diversity of our staff; and redoubling our efforts at recruiting authors of color and publishing books related to race and anti-racism. And just recently we made the decision to donate royalties from the Glory to God hymnal for every African American spiritual and Indigenous Peoples’ song to causes involved in reparative justice.” Following the report, the minutes of the PPC for the last four years were approved unanimously.

The last item for consideration Tuesday was TWE-12: Report of the Special Committee to Study the Reformed Perspective of Christian Education in the 21st Century. The committee was formed following the 222nd General Assembly in 2016. The committee was scheduled to give its report in 2020 but it was deferred to this assembly due to the pandemic, so they continued their work for two more years.

Teaching Elder Emily Chudy from Donegal Presbytery was the co-moderator of the committee and shared the report and a series of recommendations that included five directives: to create a new position in the Presbyterian Mission Agency to equip and connect Christian formation practitioners across the denomination; to direct Research Services to conduct a research study exploring the particularities and differences of Christian education and faith formation ministries and practices in racial-ethnic minority congregations; to enhance preparation for ministry to have a greater focus on the role of pastor as teacher and educator; to strengthen the Christian educator certification; and to create a committee to assess the viability of the educator certification program.

Discussion resulted in multiple proposed amendments to the recommendations and directives from the report. The amended resolution was passed to be considered at the assembly plenary, concluding the work of the committee for the day.

The final meeting of the Theology, Worship, and Education Committee of the 225th PC(USA) General Assembly convenes Wednesday morning at 8:30 a.m. EDT.