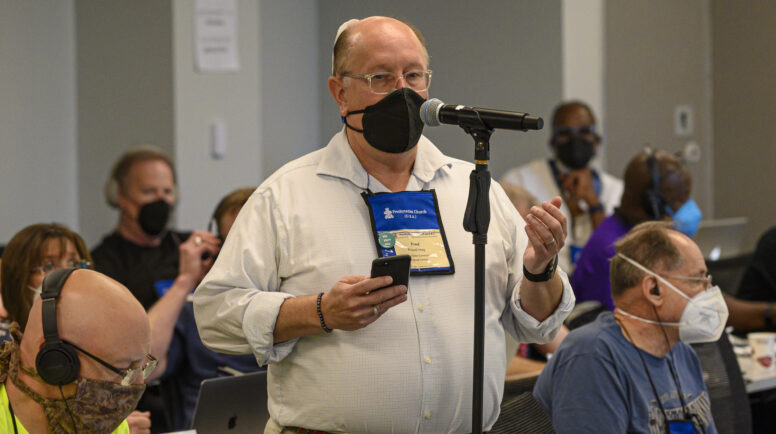 Members of the Polity Committee continue their faithful work. Photo by Jonathan Watson for Presbyterian Outlook.

Louisville, Kentucky —The Polity Committee of the 2022 General Assembly recommended on June 21 that the assembly disapproval a series of proposed amendments to the Presbyterian Church (U.S.A.) constitution — some of which sought to specify more options for congregations to provide pastoral leadership.

The committee did support one proposed constitutional amendment, although it revised the wording. What’s going to the assembly in POL-07: proposed language changes to say a presbytery would designate a minister to be “retired” rather than “honorably retired.”

An argument for that: sometimes a minister deemed “honorably retired” had behaved in ways that were not considered honorable, even if no formal charges resulted.

Here’s more of what happened in the Polity Committee on the second day of its meeting.

In the rationale to the overture, the presbytery argued that parish associates provided needed services – particularly for small churches.

“An increasing number of smaller PC(USA) congregations are employing temporary pastors rather than called and installed pastors, mostly for financial reasons,” the rationale states. “Two-thirds of the congregations in Mid-Kentucky Presbytery are served by temporary pastors or by no pastor at all. An increasing number of larger PC(USA) congregations are reducing the number of called and installed pastors on their staffs, again mostly for financial reasons.”

Overture advocate Jerry Van Marter, the presbytery’s stated clerk, said that “no one could have seen in 2011 how dramatically the financial landscape would change over the next 10 years,” and said the proposal would help congregations “find and afford desperately-needed additional pastoral leadership.”

The Advisory Committee on the Constitution (ACC) argued, however, that the current Book of Order is permissive – congregations can have parish associates if they want them. When the Book of Order is silent and doesn’t prohibit something, “you have freedom to experiment,” said Barbara Bundick of the ACC.

Honorably retired or retired? After debate and some amendments, the committee ultimately voted 28-2 to ask the assembly to approve a proposed constitutional amendment to say ministers would be “retired,” and not “honorably retired.”

The committee considered language to say a presbytery could designate someone to be “retired because of age, or physical or mental disability” – but commissioner Harlan Shober of Washington Presbytery pointed out some might retire for other reasons, such as leaving ministry to pursue another career. Another reality, according to mid council leaders: some Presbyterian pastors are burning out because of stress and overwork, particularly during the COVID-19 pandemic.

For a while, the committee played with the idea of giving presbyteries a choice of designating a minister as “honorably retired” or “retired.”

Fred Powell-Haig, a minister from the Presbytery of Tropical Florida, called that idea “an elegant and brilliant stroke of compromise.”

Powell-Haig said he’d been involved in an investigation of a case of sexual abuse in his presbytery by a minister who was honorably retired. That man moved away, to another synod. “We were worried,” Powell-Haig said, that while the man had not been convicted on charges, there “would be a chance he could still be working with minors.”

The presbytery said nothing to the new synod directly about the man’s history, he said. But calling the man “retired” rather than “honorably retired” might give a hint there was a problem, Powell-Haig said, calling it a “tool to at least begin the conversation about why this designation was given, without infringing on people’s lives and their rights.”

Commissioners also described situations they were familiar with in which a pastor did retire but the circumstances weren’t necessarily honorable. Owen Snyder, a young adult advisory delegate from Lake Erie Presbytery, said he’d heard of pastors who’d been forced out, having divided their congregations.

Denise Pass, a minister from the Presbytery of Plains and Peaks, spoke of a situation where a pastor was in a church trial proceeding, then retired. “It caused great discord” in the congregation when the minister was declared “honorably retired,” she said.

Finally, the committee landed on language which simply said a minister would be designated as “retired.”

“You can have a big party when someone retires” – make as big a fuss as the congregation wishes, said John White, a minister from Transylvania Presbytery.

“Ministers have wonderful careers of changing and nudging lives,” said Kate Stoops, a young adult advisory delegate from Seattle Presbytery. She argued for “letting go of ‘honorable’ for everyone, and letting their legacy speak for them, in the positive and the negative.”

Dual ordination. The committee voted 28-0 to recommend that the assembly disapprove POL-13, a proposed amendment from the Presbytery of Western North Carolina that would have removed the constitutional requirement that a minister from another denomination who becomes a PC(USA) minister must provide the presbytery of evidence of having “surrendered membership in any and all other Christian churches” with which that person previously was associated.

Overture advocate Marcia Mount Shoop, pastor of Grace Covenant Presbyterian Church in Asheville, North Carolina, said the request to remove the ban on dual ordination grew from a relationship her church has formed with Tami Forte Logan, an AME Zion church pastor with whom Grace Covenant works in the Faith 4 Justice movement.

The work they’ve done together has “really been life-giving and transformative,” Mount Shoop told the committee. “It’s changed my life. It’s changed the life of the church,” and led her congregation to consider the ways white supremacy culture is embedded in the church – in rules like the one her church wants to change.

The ACC recommended disapproval, saying the change – allowing the person to have dual membership in both the PC(USA) and another denomination – could raise confusion in disciplinary matters and the constitution already allows for full communion with certain denominations recognized by the General Assembly.

Mount Shoop said white supremacy culture often includes either-or thinking, that “you’re either this or you’re that. Most of us are actually both-and.” She urged the committee to set aside “those instincts we have around gate-keeping, around shutting doors before we even know what’s going to happen if we open them.”

The committee voted to recommend disapproval but to add this comment: “The Committee on Polity encourages the Presbytery of Western North Carolina and others to bring forward a proposal to the PC(USA) for engaging in full communion with other historically Black denominations as we are with UCC, ELCA, and others for the denomination to consider.”

Some commissioners referred to that strategy as “staying in the game.”

Both the ACC and the Committee on Theological Education spoke against it – in part affirming the value of seminary-trained pastoral leadership. The Advocacy Committee for Women’s Concerns also recommended disapproval, with ACWC co-moderator Madison McKinney saying “this will only create more gender inequity” as women pastors already have difficulty getting called by churches.

Commissioner Kyle Jackson, a ruling elder from the Presbytery of the Pacific, said he worries the change could a “two-tiered system” — some ministers would have a seminary education, some would not. “That would end up hurting our church,” he said, with Presbyterians in congregations that don’t have seminary-educated pastors getting a “watered-down Christian experience.”

The committee voted to recommend the assembly disapprove the proposal, but add this comment: “We note with interest that Mid-Council Committee has recommended MC-10 ‘On Establishing a Task Force to Explore the Theology and Practice of Ordination to Ordered Ministry for Ruling Elders’ which provides a resolution for the problem that POL-04 seeks to address.”

A challenge, however, remains: already, some small Presbyterian congregation cannot afford to call a seminary-educated pastor, even part-time.