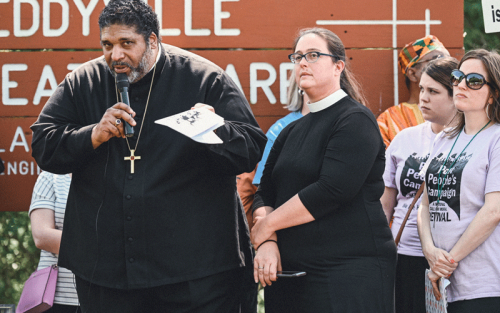 The Rev. Dr. William Barber II and the Rev. Dr. Liz Theoharis are co-chairs of the Poor People’s Campaign: A National Call for Moral Revival (Photo by Rich Copley)

(PNS) — Presbyterians will be among those traveling from all over the country for a march Saturday by the Poor People’s Campaign in Washington, D.C.

The event, formally known as the Mass Poor People’s & Low-Wage Workers’ Assembly and Moral March on Washington and to the Polls, will bring together “poor and low wealth people, state leaders, faith communities, moral allies, unions and partnering organizations” as part of a movement that’s “challenging the interlocking injustices of systemic racism, poverty, ecological devastation, the war economy and the false moral narrative of religious nationalism,” according to the Poor People’s Campaign: A National Call for Moral Revival.

The organization is co-chaired by the Rev. Dr. Liz Theoharis, a Presbyterian minister, and Bishop William J. Barber II. It has been vocal on issues including the abridgement of voting rights, the denial of living wages, the lack of expansion of health care, and widespread poverty.

“As a Presbyterian, (I’m) really hoping that we can get massive turnout from Presbyterians all across the country to see that this is the time for us to stand up for a real solution to so many of the problems that people are facing, and that we have an obligation, really, to follow the commandments and the instruction from our sacred texts and from our tradition and stand on the side of justice and truth and peace and love,” Theoharis has said.

Pat Schwinn, a member of Montclair Presbyterian Church in Oakland, California, is making her way to the march to stand in solidarity with those impacted by injustice and help the Poor People’s Campaign have a strong showing.

Her participation is an outgrowth of her concern about a number of issues in her community, including how difficult it is to afford housing and how some students fail to graduate. She also spoke of Indigenous people not always being treated with respect.

“I think everybody has a responsibility for doing something in a way that will move the needle towards everyone being … treated with equal respect and equal opportunity,” Schwinn said.

The Rev. Pat Jackson, parish associate at Bethesda Presbyterian Church in Maryland, is helping to draw Presbyterians from near and far to the march. He’s co-executive director of Interwoven Congregations, a nonprofit dedicated to supporting partnerships between faith communities of different racial compositions to promote racial justice and healing.

“While we’re an ecumenical and interfaith initiative, because we’ve begun our work with Presbyterian congregations, we’re taking special steps to encourage Presbyterians to gather together on June 18 for the march on Washington with the Poor People’s Campaign,” said Jackson. “To that end, we have shared a flyer with all the congregations of National Capital Presbytery and some other neighboring presbyteries as well as the Synod of the Mid-Atlantic that detail how we’ll all gather at the Archives Metro Station plaza in Washington D.C. the morning of the 18th.”

Participation is important because the platform of the Poor People’s Campaign “is consistent with our gospel values,” he said. “This is why we are working to encourage and challenge Presbyterians (as well as other people of faith) here in the Washington, D.C., metro and across the country to show up.”

When the Rev. Dr. Martin Luther King Jr. and others met to develop the inaugural Poor People’s Campaign more than 50 years ago, “it was an effort that recognized that people across all racial groups, and especially among those in poverty, shared common needs and interests,” Jackson added. “Such a coalition is needed today more than ever to address the poverty that grips 140 million Americans.  For Presbyterians, this is an opportunity to live into our Matthew 25 commitments to lift up those in need and promote racial justice and healing.”

Schwinn, who is active with a group of interfaith leaders in the San Francisco Bay area, hopes Saturday’s march will serve as personal motivation for continued work to help poor people. “As they say, this is a movement, not a moment,” she said.

For more information about the march, go here.