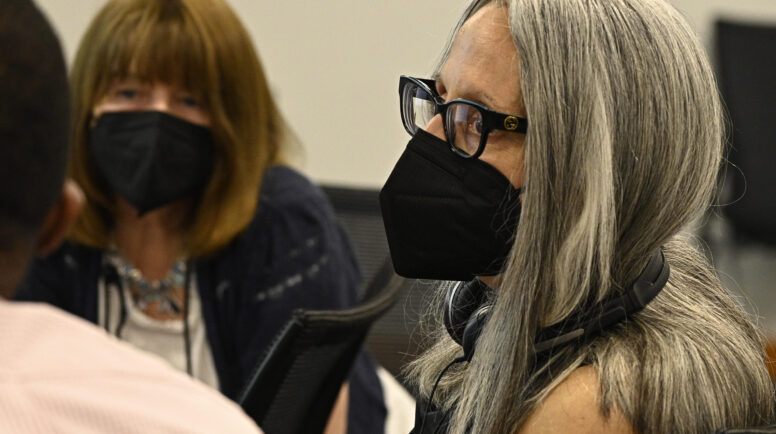 Jane Tuma (TEC-Chicago) at the Committee on Mid Councils. Photo by Jonathan Watson for Presbyterian Outlook.

Louisville, Kentucky — A theme running through much of the 225th General Assembly of the Presbyterian Church (U.S.A.) has been equity, representation and new ways of doing ministry and being the church. The assembly is meeting this week and over the next two weeks at the Presbyterian Center in Louisville in a new hybrid in person and online format.

The Mid Councils Committee recommended to the assembly item MC-10 on forming a task force “to explore the theology and practice of ordination to ordered ministry for ruling elders” in the PC(USA), particularly expanding the work and ordination practices of ruling elders to serve smaller and more rural congregations and New Worship Communities (NWC). Under the current Book of Order, ruling elders can only be

In the rationale for the overture, the Presbytery of San Fernando referenced the “ongoing numerical decline and demographic aging” of the PC(USA), while, at the same time, new immigrant communities and NWC are growing. But they do not have any formal standing in the church. The rationale states that these NWC “are prevented by our structure from taking an active role in the life and governance of the PC(USA)” because they are prohibited from forming sessions or ordaining elders due to their non-chartered status.

According to the overture’s rationale, in 2020 there were 26,000 people participating in 529 NWC. The authors of the overture wrote in the rationale that the denomination needs to expand the function and ordination of ruling elders since 15% of these NWC conducted adult baptisms, compared to 5% of charted congregations in the PC(USA).

The rationale states, “The NWC leader is excluded by our interpretation of policy from possibly qualifying to be a CRE (Commissioned Ruling Elder) with voice and vote at presbytery unless they step back into the traditional model and serve a traditional church.”

During the debate, committee members overwhelmingly expressed support for the overture, but wrestled with who should be represented on the committee beyond those already listed: “those who identify as BIPOC (Black, Indigenous, and people of color), immigrant congregations, New Worshiping Communities, and middle governing body leadership.”

Committee member Nicole Ball, teaching elder commissioner from Presbytery of the James, added to Aker’s caution by suggesting, “I’m getting uneasy a little bit that we need to spend more time fleshing out who all needs to be included in this description, and really be thoughtful about that. … I think we need to slow down a bit and really think through who all we need to put on this list as we are asking bigger questions because, as we just learned when we were talking about a couple of the other matters, language matters. What I don’t want us to do is come back two years from now and hear groups say, ‘Y’all didn’t put this in here.’”

Advice was received yesterday from the Advisory Committee on the Constitution cautioning the committee on being too prescriptive in the makeup of the task force and thereby making it difficult for the co-moderators of the General Assembly to fill the task force. Ultimately, the committee voted 29-3 to approve the overture and added to the list of those to be represented on the task force non-chartered immigrant fellowships and the Committee on Theological Education. Categories of those proposed but ultimately not explicitly included were small membership and rural churches, LGBTQIA+ persons and “other minorities represented in our communities.” It was noted that the co-moderators are not limited to selecting only those listed in the overture.

The final recommendation is to create a task force to include “those who identify as BIPOC (Black, Indigenous, and people of color), immigrant congregations, immigrant fellowships, New Worshiping Communities, Committee on Theological Education, and middle governing body leadership.” The task force will be directed to work with denominational staff and bring any changes it deems are needed as to how ruling elders can better serve the church to the 226th General Assembly in 2024.

If approved by the assembly, the task force has been estimated to have 11 people at a cost of about $30,300 over two years, increasing per capita for members by $0.01.