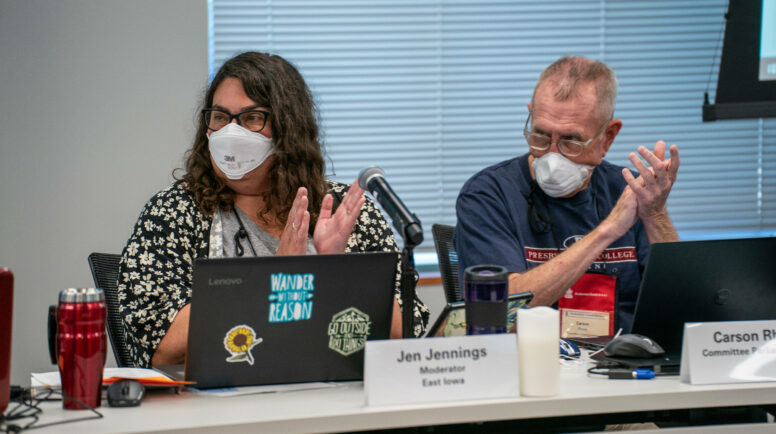 After a brief devotion on the morning of Tuesday, June 28, the Standing Rules Committee began its second day of business by returning to STAN-38, the recommendation regarding the selection of General Assembly committee moderators and vice moderators. On Monday, the committee ended its day considering more inclusive language for the diversity of committee leadership. Yet, as they got into details on the language of diversity, they slowed down and it was recommended they postpone the work until the next morning.

As they took up the issue this morning, Committee Moderator Jennifer Jennings called on Parliamentarian Carson Rhyne to describe a possible way to proceed. Rhyne suggested the committee could have a more flexible discussion as they decided on the wording by working as a quasi-committee of the whole — a way, using Robert’s Rules of Order, to create more space for informal conversation and debate.

Moderator Jennings then called upon Assistant Stated Clerk valerie izumi to discuss the process for selecting committee moderators and vice moderators. izumi emphasized the General Assembly Committee on Representation works to recruit a diverse group of people for committee leadership. Beginning with the 2020 General Assembly, all commissioners were invited to self-nominate for moderator and vice moderator positions through a form asking several questions to identify individuals of diverse backgrounds. For this General Assembly, she added, there was not enough diversity in the first round of questionnaires returned so a second round of recruiting was done. Robin Clardy, a commissioner from Los Ranchos Presbytery, affirmed the thoroughness of the questionnaire. “That application is a dog,” taking her ten hours to fill, she said.

Without objection, Moderator Jennings moved the deliberation on STAN-38 into a quasi-committee of the whole. Committee members discussed the use of specific language, what language is used in the constitution and how to best present their discernment to the plenary. Although the recommendation refers to F-1.0403, the following section is also relevant to the discussion and the concerns of the committee.

In reference to these various sections and the use of the terms “men” and “women” not being inclusive enough, Andy James from the Committee on the Office of the General Assembly mentioned the Polity Committee met last week and approved a recommendation to change F-1.0404 to use more inclusive language. The recommended change requires the approval of the General Assembly in plenary and the concurrence of half the presbyteries.

There was a discussion about using the term “women-identifying” as more inclusive language. Courtney Steininger from the Advocacy Committee for Women’s Concerns responded that they would discourage using that term as it implies it is a personal preference and not a reality. The Advocacy Committee recommended calling them “women.”

In a comment from the General Assembly Committee on Representation, resource person Anna Kendig Flores expressed gratitude for the deep conversation. She said amending the recommendation would be limited to the exact wording. A comment on the recommendation gives the committee a general direction and she assured the committee the General Assembly Committee on Representation is already paying attention to this issue.

After the morning break, the committee returned to its regular form of deliberations, and the first amendment was offered. Fritz Nelson, a commissioner from Eastminster Presbytery, asked if the commissioners could see all the amendments waiting in the queue to consider what wording they liked best. The response from leadership was that PC-Biz does not have this capability and only shows the current motion or amendment. It was suggested others could come to speak and give an “If you don’t vote for this one, I have one that says…” Beginning with Nelson, three additional members offered previews of what they were thinking.

In the end, the recommendation was amended to add the reference to F-1.0404 and the phrase: “In appointing moderators, consideration should be given to all gender identities.” The committee then turned to the comment and accepted language created by a writing group that expressed the work and thoughts of the committee during this process. It offered a minor modification to make the language reflect the will of the whole assembly, not just the committee.

Jennings turned the meeting over to Vice Moderator Annabell Williams-Blegen and the committee began working on the next three items regarding Special Committees and Commissions. As James explained, these overtures originated from the 2018 General Assembly where the assembly created 19 special committees, commissions and task forces. Signifying a significant financial and personnel commitment, some of these entities were never filled and did not meet. The three items recommend changes to help evaluate if the work can be done by a standing committee or if a special committee is really needed.

In line with the earlier discussion of diversity and inclusion in the various areas of the church, the committee wrestled with this recommendation. There were multiple attempts to amend the action, some successful and others not. In the end, the committee did not accept the recommendation and instead recommended disapproval to the plenary.

As the committee continued its work, Stephanie Anthony, the moderator of the Committee on the Office of the General Assembly, introduced the third item on special committees and commissions, STAN-08. She prefaced her comments by saying what she was going to say would sound strange, but she was recommending the disapproval of the item. Based on the discernment the committee had done on the previous item, the disapproval would be the appropriate action regarding the committee’s flow. She acknowledged “we have learned from our colleagues in the other committees” and the Committee on the Office of the General Assembly needed to look at these further. The committee acted quickly on this advice, recommending the item’s disapproval.

The following overtures were considered without discussion or objection. STAN-33 introduces language to allow the General Assembly to meet electronically. While not applicable to this Assembly, it will be added to the Standing Rules for future assemblies. As James pointed out, it could be especially useful for a special meeting of the General Assembly. The next item, STAN-13, modifies Robert’s Rules of Order for assembly meetings by adding “Motions for the previous question on more than one pending item are not in order at any time” to the Standing Rules. This eliminates the preemptive use of “calling the question and all previous questions.” James took a moment after it passed to say it was his favorite recommendation of all the ones suggested by the Committee on the Office of the General Assembly. STAN-14 extends the limits on speaking in debate to all persons recognized by the moderator, including resource persons and corresponding members.

Finally, the committee approved two items regarding the presentation of the budgets in the plenary, making clear that if approved, financial implications that cannot be accommodated under the per capita or regular budget must be scaled to fit. A recommendation was made, with some discussion, requiring coordination of a majority and minority report in plenary and having the presenters “keep them as equal in length as possible.”

Having addressed all business items scheduled for Wednesday morning, the committee adjourned for the day with prayer. The committee will address its final four recommendations on its last day of meetings.

Committee leadership and resource people in the room acknowledged members did a lot of hard work and discernment in today’s session. During the significant discussions, multiple commissioners and delegates thanked colleagues for their openness, understanding and grace in all that was done.