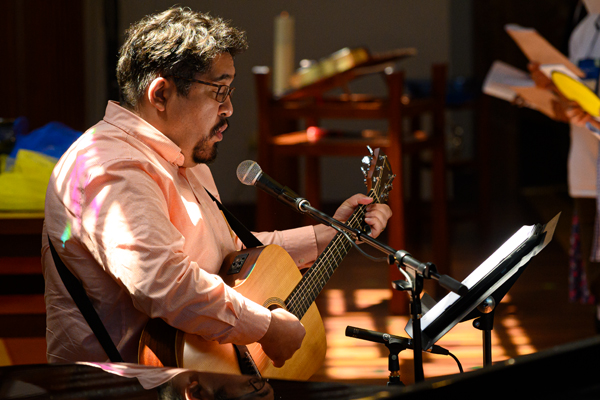 LOUISVILLE, Kentucky – The 225th General Assembly of the Presbyterian Church opened in the same way that the last 224 General Assemblies have begun, with worship. However, this worship service was a little different from previous years. The hybrid online and in-person format of the General Assembly also meant hybrid worship. Only one-fourth of the committees are presently on-site in Louisville, with the remaining delegates participating from home.

The worship service was held in the chapel of the Presbyterian Center at 100 Witherspoon Street in Louisville. The chapel accommodated 90 people total including delegates, tech crew, General Assembly and Presbyterian Mission Agency staff, and a dynamic and diverse group of worship leaders who were both in-person and leading via pre-recorded videos. Scattered around the building were groups of other people watching the worship service via the live stream, as well as people who tuned in from around the country and around the world.

The theme of the 225th General Assembly is “Lament and Hope,” which was woven throughout the worship service in the liturgy, prayers, and sermon. The service began with an interpretative dance entitled “Setting of the Table” by Suyun Son, a local artist followed by a multilingual prerecorded video welcome.

The candidates standing for co-moderator offered the opening “Invitation to Worship” declaring via prerecorded video, “We gather in faith, lamenting for all that is piercingly broken, lost, dismissed, or stolen. We gather in faith, hoping for all that God will beautifully redeem and make new…” This was new. In the past, candidates for moderator did not take the stage until the election.

The call to confession was entitled “Invitation to Groaning” and was led via video by the Assistant Dean of San Francisco Theological Seminary, Ruth T. West. She said, “As we bring our whole selves to God, let us give pause to the groan of Lament –  that deeply profound sadness, regret, grief, guilt, yearning or weariness.”

The prayer of confession was titled “The Call to Recognition” and it invited participants to, “…moan and groan in solidarity with those who are suffering, those who remain unseen and silenced, and with Creation.” It encouraged those gathered to be, “…deeply moved by the guilt of complicity, the comfort of apathy and the difficulties of enduring change.”

Bentley preached a message that moved those gathered in person to applaud and frequently offer words of affirmation throughout the sermon. He compared the context of 8th century Judah BCE of the prophet Micah with the modern context of the 21st century noting, “We’ve just become more technologically savvy, more advanced, more sophisticated and superior at working wickedness and implementing iniquity, in doing what my grandmother called ‘devilment.’ This ethical lapse amongst the leadership of the nation, the ones who are supposed to be modeling covenant life and commitment, the ones who have been charged with superintending the wellbeing and flourishing of the people, this ethical lapse has had not only disastrous economic consequences but devastating ecological consequences as well.”

Bentley preached that the shift from religiosity to righteousness will require a regeneration of the human heart and spirit. He closed his sermon with a call to be born again, born from above, to be alive to the spirit and brimming and bubbling over with the very life of God.

Following the sermon, musicians from the Mid-Kentucky Presbytery offered a stirring video anthem of “My Hope is Built on Nothing Less,” reminding those gathered that “On Christ the solid rock I stand, all other ground is sinking sand.”

An offering was taken to benefit the organization Restorative Actions, an economic equity initiative born from the intersection of theology, justice, and economics. Elona Street-Stewart introduced the offering and explained the work of the organization, which was followed by a video describing how Restorative Action is seeking to address the racial wealth gap in the United States that is the result of racial inequities and how it works toward the establishment of just relationships with Afro-American & Indigenous communities.

The service moved from the pulpit to the table where communion was presided over by the co-moderators of the 224th General Assembly. The communion liturgy included an invitation to the table, reminding those gathered that it is not a Presbyterian table, but the Lord’s table. Bentley offered a prayer followed by a very traditional communion liturgy as he broke the bread. Street-Steward poured the cup and invited those gathered to partake while the congregation sang “Come to the Table.”

The service concluded with a prerecorded bilingual benediction in English and Spanish led by the same co-moderator candidates who offered the call to worship. That was followed by a charge offered by Gregory Bentley who invited the worshipers to serve the Lord with joy and gladness and to be faithful to the meat of Micah’s passage.