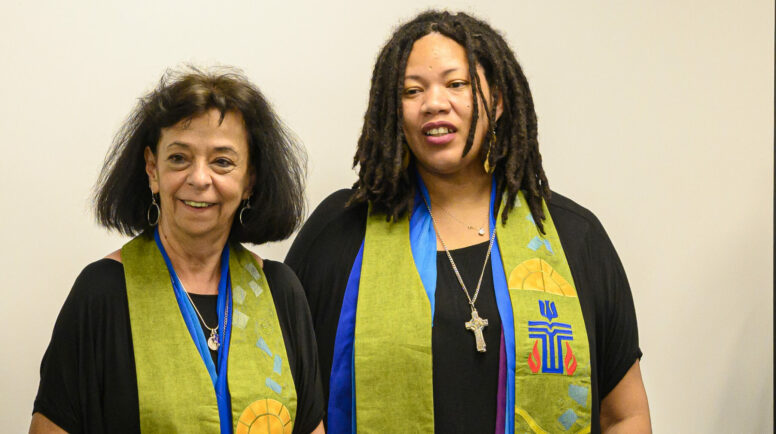 Ruth Santana-Grace (left) and Shavon Starling-Louis (right) smile after being elected the co-moderators of the 225th General Assembly.

LOUISVILLE, Kentucky – Acting decisively on the first ballot, the 2022 General Assembly on June 18 elected a team of two ministers to serve as its co-moderators – both women of color, thirty years apart in age, both of whom said they felt a strong pull of the spirit to serve in this role. They will moderate this first-ever hybrid gathering of the denomination’s highest council.

The vote was 203-151. Advisory delegates supported Santana-Grace and Starling-Louis by a roughly two-to-one.

Santana-Grace and Starling Louis will be responsible for steering the Assembly – a combination of in-person committee meetings and virtual plenary sessions – through the uncharted waters of a hybrid meeting that will stretch over three weeks from June 18-July 9. In the ensuing two years, Santana-Grace and Starling-Louis will serve as what they have repeatedly referred to as “ambassadors” for this assembly to the larger church and the world.

Santana-Grace said in an earlier interview with the Presbyterian Outlook that she began to discern the call to stand for moderator in February when colleagues began to encourage her. That call solidified in March when she connected with Starling-Louis. The newly-minted team, Santana-Grace said, were “recent strangers, now sisters bound by our love for this church.”

Starling-Louis said in a similar Outlook interview that her call to stand for co-moderator resulted from “a series of holy nudges” that included encouragement from friends, “a twinge of holy curiosity” and finally a conversation initiated by Santana-Grace. “I could hear in her voice,” Starling-Louis said, “a continuation of God’s call to be available if the way be clear.”

The 30-minute question-and-answer session just before the election provided spirited responses from the candidates. The first questioner, Jennifer Hallberg of St. Augustine Presbytery, asked each candidate for their “elevator speech” on what it means to be a Presbyterian.

Santana-Grace, who calls herself a member of the Puerto Rican diaspora, responded that the uniqueness of Presbyterians is “our willingness to submit ourselves to our discernment of the Holy Spirit.” She added that Presbyterians “are committed to reforming who we are — we don’t erase, we reform, we improve.”

Starling-Louis added that “Presbyterians proclaim in word and action – heart, mind and spirit – that we turn ourselves over to God.”

Ahumada said, simply, “When people are in need, we show up.” Tucker-Marek said the hallmarks of Presbyterians are theology and polity. Theology binds us together with God … and polity vests decision-making in councils, not individuals. This is part of our gift to other expressions of the church.”

The candidates were asked by Nathaniel Asperger, a Theological Student Advisory Delegate from Dubuque Theological Seminary, about the Matthew 25 Initiative, a growing movement within the denomination that seeks to engage congregations, presbyteries and synods in transformative ministries to address church vitality, poverty and racism.

“I like the clarity we have around Matthew 25,” said Starling-Louis. “We need to keep opening it up in various contexts.” Santana-Grace added, “I appreciate the handles Matthew 25 gives us to hold onto because this could be an overwhelming task. Matthew 25 ministries will be different in different places.”

During a post-election news conference, the new co-moderators expanded on their hopes for the church going forward and their sense of an unexpected yet unabating call to serve.

“On paper, it shouldn’t have worked,” said Starling-Louis, 39, who was recently installed as the new pastor of Memorial Presbyterian Church in Charlotte earlier this year, but who said the session of her congregation unanimously supported her call to stand as co-moderator.

Santana-Grace, 69, said both her family and her presbytery have supported her — saying her presbytery “claimed it as part of their call,” and her son, Dakota, “wanted me to lean in a lot earlier to a role like this.”

She also said, to inform those who may be wondering, that “my voice — the raspy kind of sultry voice (with which she speaks) is not a sore throat,” but that she has been diagnosed with vocal dysphonia. She said it took away her ability to sing, “but it has not silenced my voice.”

What are their plans for the next few months?

To start with, try to moderate this long, complex, hybrid assembly, and “to do it well, with a sense of grace,” Santana-Grace said — “making sure that voices are fairly heard,” Starling-Louis added.

What are the deepest concerns they are hearing from congregations at the grassroots, particularly as the COVID-19 pandemic lingers? “There is a genuine sense of deep grief,” Starling-Louis said. “We have lost people.” With the fatigue the pandemic has brought, people are needing to learn “what does it mean to take a break? What does it mean to breathe?”

Santana-Grace said “the exhaustion is real,” and “there is no returning to what has been.” But this also is a season of creativity and opportunity, she said, for an institution that “has often been tempted by those seven deadly words: We never did it that way before.”

She spoke of the power of Easter morning, of the darkness of the tomb that gave way to resurrection. “We become free to say, ‘God, what would you have us do?’” Starling-Louis said. It’s an invitation to “shift from we don’t have, we can’t, to what is it that God would have us do right now?”