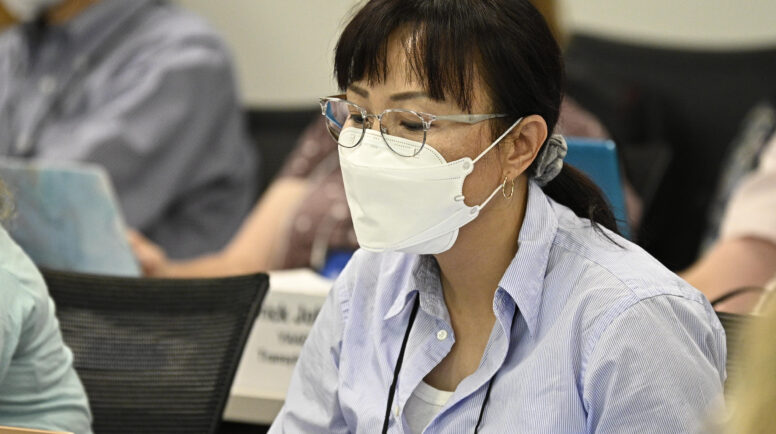 To begin their meeting on June 20, 2022, the committee unanimously passed resolutions TWE-02 and TWE-18, the presentation of awards for excellence in theological education presented by Lee Hinson-Hasty, senior director for Theological Education Funds Development for the Committee on Theological Education (COTE). There were two groups of awardees. The group from the 224th General Assembly in 2020 included Elizabeth Francis Caldwell and Darrell Likens Guder, and were deferred to this year. The group from the 225th General Assembly included Frank Yamada and Gayraud Wilmore, a prolific author, seminary professor and the only Black member of the committee that wrote the Confession of 1967. Wilmore died in 2020 so the award is being made posthumously.

Next, the committee considered TWE-15, the Confirmation of Election of President of Pittsburgh Theological Seminary Asa J. Lee, which also passed unanimously. The committee also approved the Board of Trustees of the Presbyterian seminaries, authorized theological institutions to celebrate communion, and accepted the minutes of the Committee on Theological Education (COTE) before breaking for lunch. Following lunch, the committee considered the covenant between Auburn Seminary and the PC(USA) with presentations by Heath Rada, moderator of the 222nd General Assembly, and the president of Auburn Seminary, Emma Jordan-Simpson. The covenant was approved unanimously.

Next, the committee considered the covenant relationship with San Francisco Theological Seminary (SFTS). This was one of the most contentious issues at the 224th General Assembly in 2020. Christopher Ocker, interim dean of SFTS joined the meeting via Zoom and offered his full endorsement of the proposed covenant. Saundra Tracy from COTE spoke, describing the process of how the covenant was written and gave her endorsement of the covenant on behalf of COTE. This resolution also passed unanimously with little discussion and the outcome was met with applause and a prayer of gratitude offered by the committee vice moderator Eniko Ferenczy.

The committee next took up TWE-09: Report and Recommendations from the Presbyteries’ Cooperative Committee on Examinations for Candidates (PCC) dealing with ordination exams. This was the most discussed and debated topic of the day with wide-ranging conversations about the value of a national standardized organization exam. The committee heard from teaching elders who had taken the exam and ruling elders who have served on the reading committee. Following that discussion, the resolution was also amended to include language suggested by the Racial Equity Advocacy Committee that named “nominees of color and multi-lingual nominees” and “readers who have the racially, culturally, and linguistically diverse gifts and experience.” The resolution was passed.

The committee then considered TWE-09: Regarding the Status of the University of Tulsa as a Presbyterian-related University. This resolution was unfinished business from the 224th General Assembly. The committee learned from Jeffrey Arnold, the executive director of the Association of Presbyterian Colleges and Universities, that the administration of the university had turned over and the concerns addressed in the resolution had largely been resolved, so the committee voted to reject the motion.

The committee closed its work by unanimously affirming a resolution for the “Institutional Relationship Between the General Assembly of the Presbyterian Church (U.S.A.) and the Historically Presbyterian Racial Ethnic Institutions,” and the approval of Presbyterian-related schools, colleges and universities. They amended the final resolution to include a description of what that affiliation meant which had been authored by the Presbyterian Mission Agency in response to a referral from the 2018 General Assembly. The text of that proposed definition of affiliation can be found in the comments section of  TWE-09.