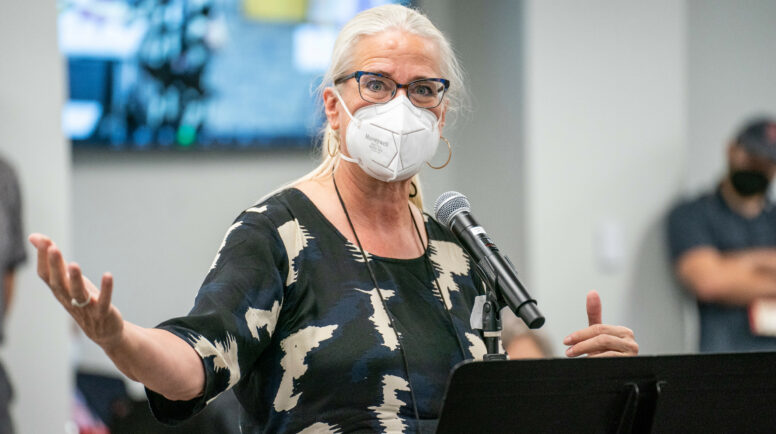 Louisville, Kentucky – The 225th General Assembly of the Presbyterian Church (U.S.A.) today voted to move the Mission Engagement and Support (MES) department from the Presbyterian Mission Agency (PMA) to the Administrative Services Group (ASG), which provides support services to both PMA and the Office of the General Assembly (OGA). The proposal (MOV-02), brought to the assembly by its Moving Forward/Vision 2020 Committee, passed 289-69.

A move to refer the item to the newly created commission to unify PMA and OGA was turned down 213-149. The action came as the PC(USA) is experiencing severe stress on its per capita budget, necessitating expanded fundraising efforts. Because OGA is the primary beneficiary of per capita funds and MES is lodged in PMA, several speakers in both plenary and the MOV committee stressed the need for “a more level playing field” for denominational funds development.

Deb Avery of the Moving Forward Implementation Special Committee said the move of MES “builds on the important work of funds development no matter how the structural changes happen,” adding, “This is an urgent need right now.”

Earlier in the day, commissioners celebrated their earlier approval (on the consent agenda) of the “Guiding Statement” produced by the 2020 Vision Team. The statement (MOV-01) distills the denomination’s vision into five calls to the PC(USA) to be Prayerful, Courageous, United, Serving and Alive. That the five calls spell out acronym PCUSA was not intentional, said 2020 Vision Team co-chair Salvador Gavalda of Heartland Presbytery. “At first we thought this might be too gimmicky,” he acknowledged, “but it was not pre-planned. It just spoke to us.”

Gavalda and co-chair Sabrina Slater of Geneva Presbytery led the Assembly in the reading of the Guiding Statement and then played a recording of the song created by the Team, “This is Who We Are.”

The day began with an opening prayer by Ruling Elder Jen Fraser of Santa Barbara Presbytery and a brief statement to the Assembly by Stated Clerk J. Herbert Nelson, II. “We are not in charge of future nor can we know it, but in the uncertainty we serve a God who loves us and takes care of us, reminding us that we do not walk alone,” Nelson told commissioners.

“We are in a different age, a different time and life is not as certain as we want it to be,” he continued. “Maybe we’ll see a new normal,” Nelson concluded, “but in any event we are walking – not knowing where we are going, but knowing we walk alongside a God who does and who is good to us through all times.”

The Assembly then considered four motions to reconsider actions it took Friday. Three were rejected: HSB-06 on a new family leave policy, GAMC-15 on the format of the 224 General Assembly, and FIN-10 on the composition of a commission to unify PMA and OGA. With no changes made, the new family leave policy includes 12 weeks of paid leave; the 2024 General Assembly will be hybrid, with committee meetings online and the plenary sessions in person in Salt Lake City: and the commission will include two Young Adult Advisory Delegates from this Assembly, not “ruling elders between 18 and 25.”

By a vote of 326-54 – after agreeing to reconsider its prior approval of the new book of Church Discipline (formerly Rules of Discipline) – the Assembly amended the brand-new document (ROD-03) by changing the wording of D-7.0101 and D-7-0201 to read that the part of the purpose of the church’s discipline is for “the correction and restraint of wrongdoing.” The previous wording stated the purpose as “constructive criticism of offenders.”

Commissioner Jasmine Smart of St. Augustine Presbytery stated the case for the amendments most succinctly: “Constructive criticism is too weak a term for what we need to do in too many disciplinary cases.”