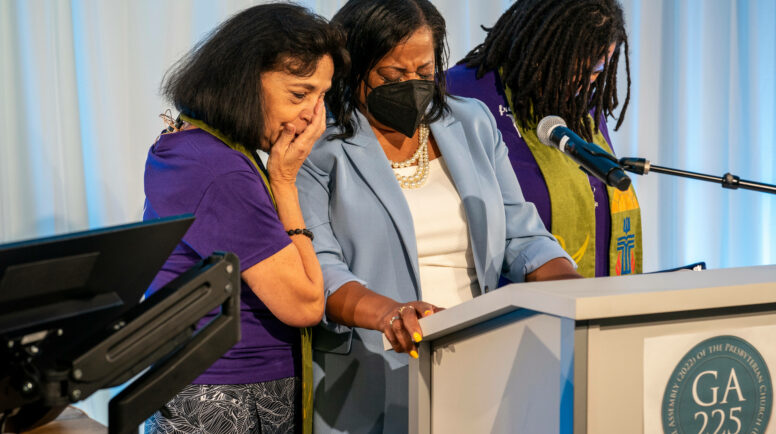 Co-Moderators of the 225th General Assembly of the PC(USA) Ruth Santana-Grace (left) and Shavon Starling-Louis (right) pray with Diane Moffett after her re-election as president and executive director of the Presbyterian Mission Agency. Photo by Gregg Brekke for Presbyterian Outlook.

Louisville, Kentucky — Plenary 13 began with a corrective amendment to reconsider an approved resolution of the assembly. Jason Cashing, a teaching elder commissioner from Utica Presbytery, moved that recommendation 12 of VIOL-07 be amended with the following revised language (shown in bold): “The PC(USA) calls upon all civically elected representatives, at all levels, to earnestly, courageously and urgently pass meaningful legislation for the common good and public safety of all our citizens, residents, and visitors.” This would remove the language, “that protects individual rights…” John McKell, a teaching elder commissioner from North Alabama Presbytery, expressed concern on removing “taking out individual rights” from the resolution stating “With that in there, it held the two in balance: individual rights and the safety of all people in the country,” he said, adding other assembly actions concerning the bodily autonomy of women and of self-determination of other peoples’ seemed to be in conflict with the amended language. The resolution was amended to include more specific language and was passed by the assembly 332-33.

The General Assembly Policies and Procedures Committee started its report at 4:30 p.m. EDT on Friday, July 8.

The committee started its business with GA-PAP-13, the reelection of Diane Givens Moffett as president and executive director of the Presbyterian Mission Agency (PMA). Moffett was described by PMA elected leaders as a bold and visionary leader, having embedded the “Matthew 25 Initiative” into the life of the PC(USA). She was also described as an agent of change, an innovator, a person with the ability to lead and articulate complex issues in ways that all can understand, an advocate who works across the church and collaborates well with others, and a leader who is open, inclusive, and transparent. Moffett thanked the board for their willingness to innovate, and she thanked the staff of the PMA for their amazing commitment to the work of the church. She reiterated the importance of the Matthew 25 Initiative and declared that she is more hopeful about the future of the PC(USA) than she has ever been. The General Assembly voted 352-5 to reelect Moffett. Moffett’s daughter Eustacia Moffett Marshall and granddaughter Jessica joined in the commissioning prayer along with outgoing PMA Board Moderator Warren Lesane and incoming PMA Board Co-Moderator Shannan Vance-Ocampo and others. Stated Clerk J. Herbert Nelson offered a closing prayer for the commissioning.

The committee next brought forth GA-PAP-20 which would expand the financial reporting in the “Session Annual Statistical Report” to include more detailed information such as budgeted income, budgeted expense, receipts and expenditures. Christy Gleason, ruling elder commissioner from New Castle Presbytery, spoke against this due to the burden it places on small churches. The resolution passed 230-138.

Vice Moderator Wilfredo Garcia introduced GA-PAP-22 which was brought to the assembly as a commissioner’s resolution. This resolution would functionally move the Presbyterian Board of Pensions under control of the Office of the General Assembly. He shared the committee recommendation to disapprove and invited the president of the Board of Pensions, Frank Spencer, to speak. Spencer articulated the legal implications of the resolution and why it would not work. Leigh Benish, teaching elder commissioner from Beaver-Butler Presbytery, offered a substitute motion to refer GA-PAP-22 to a special committee in order to assess the relationship between the Board of Pensions and the Office of the General Assembly and to bring any recommended modifications to the Memorandum of Understanding to the 226th General Assembly. The substitute motion did not pass to become the main motion. So the General Assembly moved to a vote to disapprove based on the recommendation of the committee, which passed.