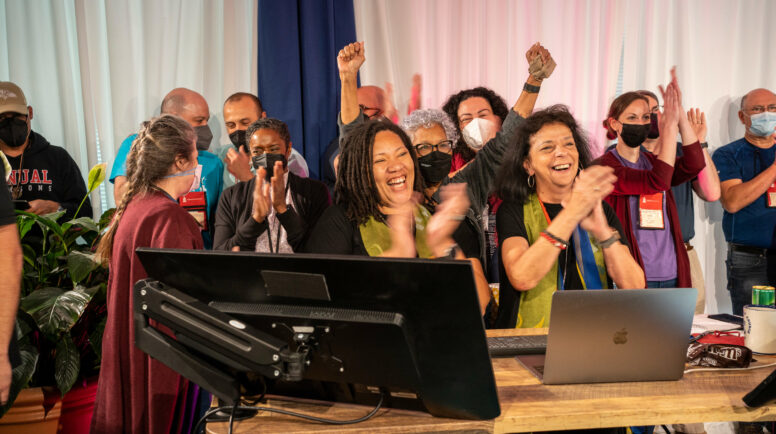 General Assembly 225 co-moderators and support staff celebrate the end of the assembly. Photo by Gregg Brekke for Presbyterian Outlook.

Louisville, Kentucky — Under the steady leadership of co-moderators Ruth Santana-Grace and Shavon Starling-Louis, the closing plenary of the 225th General Assembly of the Presbyterian Church (U.S.A.) started 90 minutes earlier than schedule on Saturday, July 9, concluding at 4:40 pm EDT.

David Gambrell from the office of Theology, Worship and Formation in the Presbyterian Mission Agency opened the closing plenary session in prayer. It was noted that Gambrell had written many of the prayers used throughout the assembly as well as much of the content found in the PC(USA) daily prayer app.

Next the co-moderators introduced Kerry Rice, Deputy Stated Clerk of the Office of General Assembly, who thanked the COVID advisory team who helped establish the COVID safety protocols for the hybrid assembly.

Next up was Adriana Soto-Acevedo, a Young Adult Advisory Delegate (YAAD) from the Presbytery of San Juan in Puerto Rico, offered a reflection on the work of the Holy Spirit at the assembly and a word of tremendous gratitude for the co-moderators. On behalf of the YAADs, Soto-Acevedo presented a gift that included a collection of narratives from the YAADs, bags of chocolate and $525 toward the cash bail project as part of the Hands and Feet initiative.  Santana-Grace reminded the YAADs they are loved, cherished, respected, and appreciated.

Starling-Louis added, “You are not the church of the future, you are the church now. We need your authentic self in the church, and we are grateful for you!”

Rice returned to the podium and offered words of thanks for the staff of the Office of General Assembly for their role in facilitating this unique assembly. He thanked PMA staff for their hospitality, the administrative services group for coffee and refreshments, the many volunteers, members and churches of the Presbytery of Mid-Kentucky, committee resource personnel, production crew, the GA225 staff planning team and others stating, “Basically we have had to reinvent the way that we do the assembly, not once, but twice. These teams innovation and problem solving has been invaluable.”

Rice’s final words of gratitude were for the commissioners to the assembly for making the church a community of faith, hope, love, and witness and to the co-moderators for guiding the assembly with compassion and evident love for the church.

Co-Moderator Starling-Louis continued, stating, “Thank you for trusting us to steward this assembly. We felt like we have been on eagle’s wings. We share our gratitude for every name that Kerry Rice said and have been blessed.”

Co-Moderator Santana-Grace offered special recognition for the interpreters and captioners for their hard work and reminded those watching five new entities were created by the assembly that will require volunteer appointments. She asked everyone to please use the GA nomination process if they wish to serve on one of these entities.

Next, Stated Clerk J. Herbert Nelson, II, offered words of gratitude for all those who made the assembly happen in its hybrid format. He also thanked the young commissioners and advisory delegates for their faithfulness and for taking their time and energy to walk by faith with the church, saying “they helped us to find our faith.”

Nelson continued, “We have a lot in front of us going forward as we try to become the church of the 21st century, but we also have a need to reach out. The young people in this place have demonstrated to us just how important this is. Blessings for all our agencies, we are going to pull this thing together and make this work.”

Following Nelson’s remarks, the co-moderators invited the technical crew to come into the camera shot, allowing everyone who had worked behind the scenes to be thanked. Once the crew was assembled on the sound stage, the co-moderators thanked them and asked them to remain present and join them in the closing prayer.

The co-moderators stated, “We want to end our time the way we started, inspired by the Oscar Romero prayer.” They read the prayer together and then proudly proclaimed, “The 225th General Assembly is now adjourned.”

At the conclusion of the assembly, the Presbyterian Outlook held a brief interview with the co-moderators. They were asked what the highlight of the General Assembly was for them. Santana-Grace said it was the strength of the YAADs, stating that they inspire her and remind her why she does this ministry. From a programmatic standpoint, she was moved by the affirmation of Diane Moffett being reappointed for another four year term as the executive director of the Presbyterian Mission Agency and the boldness and clarity of this assembly in responding to the challenges that the church and the world face. Starling-Louis stated she loved the spirit of the Assembly, that it was not about perfection but about process and building on something that already exists, and yet God was also calling us to do liberating work which felt holy and good. She mentioned the confession of white-bodied people around the sin of racism for African-Americans, and how that felt holy and was a sign of God’s provision despite the hybrid/on-line format.

Moving into the future, the co-moderators were asked what they are excited about now that the Assembly is over and they continue their two year terms. Starling-Louis talked about her love of the connectional church and how this role will let her support people who share their gifts with the church. She said she was looking forward to sharing stories as she traveled, calling that holy ground. Santana-Grace talked about her excitement for moving from the space of the Assembly to becoming an ambassador of great hope. She said that “unbounded we will thrive” and that as co-moderators they are committed to the stories of the congregations and a theology of flourishing and abundance in a culture of scarcity.

Finally, they were asked to reflect on what they learned about each other while they served as co-moderators. Santana-Grace said the instincts that brought them together were blessed by God. They bring differing gifts, and that Starling-Louis’ spirit of openness has moved her deeply. Starling-Louis said she loves Santana-Grace’s attention to relationships and named it as one of her greatest gifts not only to her, but to the whole church.

While General Assembly 225 may be over, the Presbyterian Outlook will continue to report on the work of this assembly, and how the decisions made will affect the denomination in the coming years.