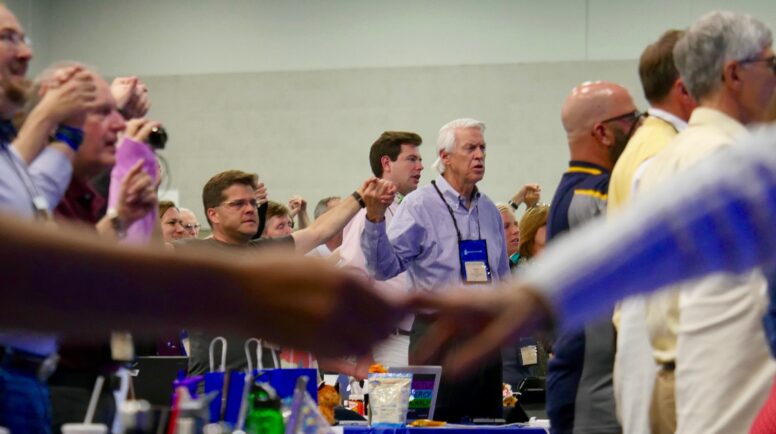 PORTLAND, Ore. – The 2016 General Assembly made history by voting June 22 to add the Belhar Confession – a moving call for reconciliation, and a condemnation of racial injustice written in the crucible of the struggle over apartheid – to the Presbyterian Church (U.S.A.)’s Book of Confessions. Belhar becomes the first confession from the global south the mostly-white PC(USA) has ever adopted – and the PC(USA) has done so at a time when racial tension, injustice and violence in the United States make headlines nearly every day.

Christians from South Africa told the assembly they have been waiting for this day for years.

On the evening of June 22, the Ecumenical and Interfaith Relations Committee of the 2016 General Assembly moved the approval of the Confession of Belhar. Stated Clerk Gradye Parsons explained to the assembly the ramifications of the vote that was about to be taken. Should the commissioners pass the motion, the Confession of Belhar would become part of the Book of Confessions, which is part of the PC(USA)’s constitution. After commissioners watched a video explaining the import and impact of Belhar, the assembly’s co-moderator, T. Denise Anderson, called for discussion. There was none.

The commissioners then voted overwhelmingly (540-33) to approve the measure, and with that the first confession since The Brief Statement of Faith in 1983 was added to the Book of Confessions. Across the room, people began to clap; commissioners rose to their feet and musicians took the stage to lead the body in singing, “Oh, Freedom.”

Godfrey Betha, vice moderator of the Uniting Reformed Church of Southern Africa, was invited to address the assembly. “It is quarter to 6 (in the morning) in South Africa, and I believe there are those who did not sleep waiting for this moment,” Betha said. He went on to say, “We gave you this gift and you have been unwrapping this gift for quite some time.”

Belhar has been a long time coming. The 219th General Assembly in 2010 approved it but Belhar then failed to win approval from the required two-thirds of presbyteries. The 220th General Assembly in 2012 created a special committee given the task of studying the Confession of Belhar and creating educational materials. Once again, in 2014, the assembly approved the addition of Belhar – the first step in the process. This time, the required two-thirds of the presbyteries did vote in favor – allowing Belhar to come to the 222nd General Assembly for the historic vote, the last step in a long process.

Betha noted that “it is the 22nd … the 222nd GA. I will never forget this date.” He continued: “Your decision affirms you say to your children, you say to all, ‘When you come to us looking for a glimmer of racism, don’t come to our church.’ ”

Quoting Philippians 1:6, Betha closed by saying, “I am confident of this, the one who began a good work in you will continue to perfect it until the day of Christ Jesus – Viva Belhar Confession! Viva!”

Once again people rose to their feet and applauded.

Allan Boesak, a pastor from the Uniting Reformed Church of Southern Africa, anti-apartheid activist, and drafter of the Confession of Belhar, came to the podium saying, “What a night, what a night! Thank you so much for coming to this point of this journey – I thank you for this action tonight.”

Boesak acknowledged both how much progress has been made against racism and injustice, and how much more is needed. He told of the adoption of Belhar in his own denomination in 1986. Upon its adoption, the youth started singing “We Shall Overcome.”

At that, someone began to sing from the floor, “We Shall Overcome.” By the second verse the body had joined hands, by the third they had lifted them upward. Some on the stage couldn’t hold back tears and co-moderator Anderson was caught on the large screen mouthing, “Wow.”

There was no doubt the gift of Belhar had finally been fully unwrapped. The challenge now is for the PC(USA) to open it up and use it.