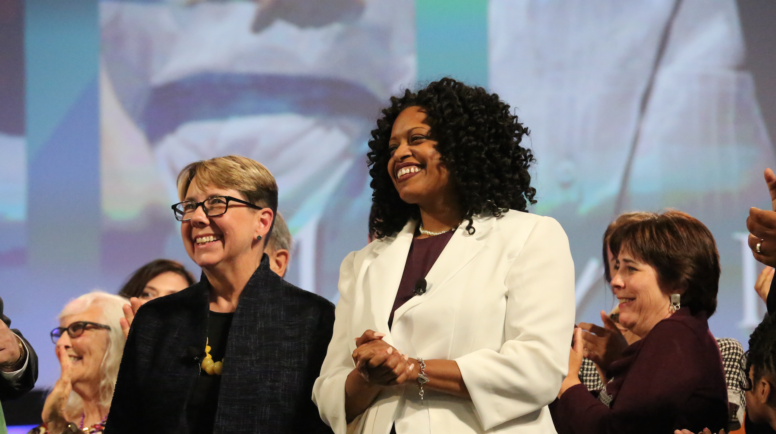 On the first ballot, the 2016 General Assembly of the Presbyterian Church (U.S.A.) elected on June 18 the team of T. Denise Anderson and Jan Edmiston as its co-moderators – choosing leaders who say they want to “cast a vision of hope for the church we love dearly” and who have challenged Presbyterians to realize that change is both inevitable and can be a force for good.

The assembly elected Anderson and Edmiston – both teaching elders – by a vote of 432 (76 percent) to 136 (24 percent) over the team of Adan Mairena, a teaching elder and new church development pastor from Philadelphia, and David P. Parker, a ruling elder and lawyer from North Carolina.

Edmiston told the assembly that some suggested this was a hard time – the wrong time – to stand for co-moderator. “Congregations are leaving. Gradye Parsons is retiring – we’ll be electing a brand-new stated clerk. Everything is in transition” – and that’s exactly why she and Anderson decided to stand for co-moderators, because “God works best in times of transition and chaos and anxiety. That is the time the Sprit shows us what God can do.”

Edmiston also said this was the perfect time to stand: shortly after the worst shooting in U.S. history, at the Pulse nightclub in Orlando, “in a gay bar during pride month”; at the one-year anniversary of the murders of African-American worshippers at Mother Emanuel AME Church in Charleston, South Carolina; on the 60th anniversary of the first ordination of women in the Presbyterian church.

“We hope to be co-moderators who talk about these things,” Edmiston said.

Later, during a 30-minute question-and-answer session, Anderson spoke of the pervasiveness of racism and the need “for radical reconciliation that can only occur among equals.”

Edmiston, who earned a Master of Divinity from Andover-Newton Theological School in Massachusetts and a doctorate in Christian spirituality from Columbia Theological Seminary, is associate executive presbyter for ministry at the Presbytery of Chicago and was nominated by that presbytery. Anderson, a graduate of Howard University School of Divinity, is pastor of Unity Presbyterian Church in Temple Hills, Maryland, and was nominated by National Capital Presbytery.

This election of co-moderators – rather than a moderator and a vice-moderator – is noteworthy for several reasons.

For one, it’s a first – a new practice which the 2014 General Assembly enabled by changing the rules, allowing candidates to choose whether to stand for election as co-moderators or in the traditional moderator and vice-moderator roles.

Second, it’s a chance for innovation, as the co-moderators can decide for themselves how to best use their gifts and time and divide up responsibilities.

And third, this is the first time an assembly has elected a slate of two women to serve in moderatorial leadership. When women have served as moderators or vice moderators previously, there’s always been a man on the ticket as well.

Anderson and Edmiston also both show some willingness to push the boundaries – speaking and writing candidly, for example, about racial reconciliation, generational shifts within the denomination, what needs encouraging and what needs to change. Both are bloggers (Edmiston at A Church for Starving Artists and Anderson at Soula Scriptura) and are active on social media, giving them spaces to express their own views and to engage directly with Presbyterians across the church.

Denise Anderson (the T stands for Tawnya) and Jan Edmiston came to this partnership from different generations, different races and different spiritual paths. Edmiston is white and 60 years old; Anderson black and 37. Edmiston is a cradle Presbyterian, a child of the church; Anderson was baptized in the African Methodist Episcopal church and later became a Baptist, and then went back to the AME church. She didn’t become Presbyterian until after she studied under what she described as “amazing Presbyterian professors” at Howard University School of Divinity, and met the man who later became her husband, Carter, who was attending a PC(USA) congregation.

There are similarities as well. Both are teaching elders. Both are married, and both are mothers. Both are progressive and from big cities.

Mairena and Parker also presented a slate with considerable differences – a combination they described as a Southern lawyer and a northern preacher. Parker’s father’s family came to the New World on the Mayflower, before the American Revolution. Mairena was born in Honduras, and his parents didn’t arrive in the United Sates until 1967, political dissidents who left Central America and headed north to both become PC(USA) ministers. They described the theme of their candidacy as reconciliation.

After their election, Anderson and Edmiston strode to the platform with huge smiles, as commissioners began to sing, at first softly and then growing ever-stronger: “Spirit of the Living God, fall afresh on me.”

During their installation as co-moderators, the two stood arm-in-arm, beaming and surrounded by their spouses and children, Anderson with her left arm wrapped around her daughter Layla.

During a 30-minute question and answer session, all four candidates addressed questions of deep concern to the PC(USA), including racial reconciliation; gender inclusivity and patriarichy in liturgy; and what they would say to congregations and pastors leaving the PC(USA) for other denominations.

They were also asked to describe a time they’d failed in ministry – with Edmiston acknowledging missing a wedding she was supposed to perform because of a misunderstanding about the date. While the couple waited, she was at a soccer field watching her daughter play. The couple held the reception first, stalling for time, and finally a Methodist minister who was a wedding guest stepped in to perform the vows.

“God teaches me through every mistake,” Edmiston said.

Anderson said she failed when she had doubted her own gifts and calling, when she silenced her own strong voice. “I betrayed myself in those moments,” she said – promising she would not do that as co-moderator.

“Is Jesus Christ the only way to salvation?” they were asked.

And Edmiston said yes is the answer – but “there also is some interpretation that goes with that.” She said she has friends who don’t claim Jesus as their Lord and Savior, but who live as Jesus taught. “I am really thrilled that God is the one who gets to sort that out.”

In their remarks, Parker and Mairena also helped cast a vision for the PC(USA), with Mairena describing how his parents came to the United States with no family here, leaving their home in Central America out of political dissent, and how the Presbyterian church embraced them.

“That is why I love being Presbyterian; that is why I choose to stay,” Mairena said. “If we remain connectional and if we continue to side with those and the margins and the shadows of society,” then “the future is so bright you’ve got to wear shades.”