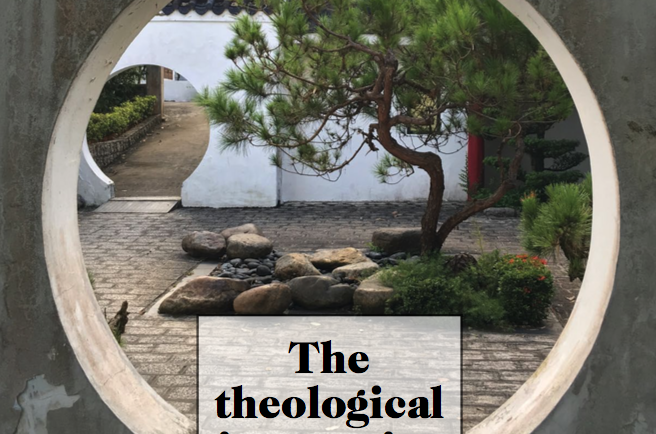 I stepped out of my lodgings at Tao Fong Shan Christian Centre early on a Sunday morning in late August and passed through a thick curtain of humidity that caused beads of sweat to ooze from my pores and my hair to thicken into dense curls. Hong Kong is hot in late summer. The heat swells and builds up over days until a rain shower cools the earth and releases the humidity almost like taking the top off a slow cooker at the end of eight hours or more. I was headed to a small bus that morning to travel from Sha Tin to central Hong Kong, where St. John’s Anglican Cathedral is located.

On that Sunday I decided to sacrifice formality to be dressed comfortably. My initial hope was that, after fulfilling a duty to attend worship as a representative of the Presbyterian Church (U.S.A.) at an ecumenical conference, I might have a little time to sightsee in the city center. If you have ever participated in an ecumenical meeting or intensive graduate course, you will understand the need for a bit of downtime. Those of us participating in the Global Ecumenical School on Governance, Economics, and Management (GEM) had already been meeting for six days, sometimes as long as 10 hours a day. Morning worship, however, became much more than an obligation to fulfill. Worship at St. John’s was the defining moment of GEM School as it integrated, synthesized and clarified the ultimate purpose, mission and meaning of our study of economics.

FOLLOWING MIGRANT WORKERS
It took about 45 minutes to drive from Sha Tin to the city center. Groups traveling together are notoriously late, so when the bus finally arrived at St. John’s the young woman who was our guide quickly ushered us off the bus. I stood at the door of the bus as it opened and all I could see was a large crowd of people walking down the sidewalk. The path to the church wasn’t clear. I asked our guide which way to go. She replied, “Just follow those women. They are migrant workers.”

Three of us from our larger group got out of the bus and stepped into the crowd to make our way to St. John’s — Thabo Magkoba (the Archbishop of Capetown), Blandina Faustina Sawayael and I. The presence of the archbishop in our small group meant that we were welcomed like dignitaries. When we arrived at the entrance to the church, the pastor, Catherine Graham, warmly greeted us and briskly walked us to the front pew of the sanctuary. I didn’t have much time to look around and take account of the surroundings.

As you will likely be aware, Anglican services are filled with words, mostly the words of prayers printed in The Book of Common Prayer. But it wasn’t the words that held my attention and captured my consciousness during that service; it was the words made flesh. I felt a consciousness and direct experience of God’s presence in that sanctuary as the words that were preached, read and spoken throughout our two weeks in Hong Kong were made flesh at the table of community.

Of course, the service culminated in communion. Communion took a really long time. Standing in the front pew I could see everyone who came to the table. People just kept coming — people in suits or hipster jeans; dressy skirts or shorts and T-shirts; heels, oxfords, sandals, flip-flops or tennis shoes. Many of those who came were women forced to migrate from the Philippines to Hong Kong in order to find work as caregivers, cleaners and cooks — ironically, so that they could pay for the food being served at the tables of their own families hundreds of miles away.

CRUCIAL MINISTRY
St. John’s is built on what is today a prime piece of real estate in Hong Kong’s city center. The church’s Gothic steeple is overshadowed by the multistoried skyscraper of HSBC, the Bank of China. After worship, Catherine graciously offered to take us on a tour of the church and the surrounding community. Catherine is the Anglican Communion Refugee and Migrant Network coordinator at St. John’s. A central aspect of this church’s ministry is with migrant workers. One of the programs that we were introduced to was Helpers for Domestic Helpers, which provides free paralegal advice and counseling for foreign domestic workers. According to CNN, there are around 319,000 domestic workers in Hong Kong, most of them from the Philippines and Indonesia.

As we walked across the churchyard and down the steps toward the city center, one could not help feeling overwhelmed by the number of people on the streets. Many of them were domestic workers seeking the shade provided by the “cathedrals of commerce,” skyscrapers that define the city’s skyline.

There are so many people on the street on Sunday because for most workers the day is reserved for rest. Apartments are much smaller than U.S. standards, so families who employ domestic workers ask them to leave their homes on Sundays so that they can have a little privacy. A foreign worker in a foreign land is forced to go out into the streets. Mistreatment of domestic workers in Hong Kong is well documented by human rights groups such as Amnesty International. Many of the workers are trafficked. Women will arrive in Hong Kong with little bargaining power for their own wages and are often indebted to agencies that find them work. There are laws to protect them that all too often go unenforced. Therefore, it is essential for St. John’s to help domestic workers understand their rights and to gain access to justice and equal treatment before the law through Helpers for Domestic Helpers.

INTERTWINED GOALS
Much more could be said about the unjust treatment of migrant workers, but a larger point being made here cannot be missed. Simply put, migrant workers keep coming to Hong Kong because they need work to put food on their families’ tables, and their employers need domestic helpers to keep their own lives going. The life circumstances and personal and financial goals of these people are intertwined, yet at the same time framed and defined by a global economic system that prioritizes financial gains by the winners while ignoring the impact of those gains on the losers. I confronted that reality quite tangibly when I made my way up to the communion rail and broke bread and drank wine with the people at St. John’s.

ROLE OF GEM SCHOOL
The story of my visit to St. John’s sets the context for this issue of the Presbyterian Outlook. Fifteen religious leaders representing a variety of countries and a variety of Christian denominations traveled to Hong Kong to build their economic competencies during the GEM School held at Tao Fong Shan Christian Centre from August 22 to September 2, 2016. You may wonder why the school set out to build the economic competencies of religious leaders, particularly those involved in the ecumenical movement.

One reason is that, in our time, economics is dangerously close to becoming a new theology. To play on a phrase from Karl Barth, economics is seen as the “queen of the sciences” in the Western academy and in U.S. society, as well as in many other places around the globe.

Another reason is that “economics is a moral thing,” as Martin Büscher, dean of the GEM School, puts it in his article “Theology and Economics: Communicating Between Two Worlds.” Some economists will argue that markets are morally neutral. The dominant approach to wealth creation, neoliberalism, is rooted in this idea and is a political and economic project that operates on the assumption that the economy is a closed social system, ignoring its impact on neighbor and nature. Neoliberalism has been the driving force behind economic policy for the last 40 years, as evidenced in policies that emphasize the privatization of public goods and services, favor deregulation and market efficiency, dismantle social programs and shrink the role of government.

As a Christian theologian, I have to raise this critical question: How can people of faith continue to be satisfied with economic policies fueled by neoliberalism and the claim that markets are morally neutral when confronted with the reality of lives lived by people like migrant workers and the peril in which we have placed our planet? The pitch of my moral tuning forks sounds out to something other than stock market ticker tape. I find myself consistently forced to make choices in the marketplace that seem like the least of many evils. I believe that, in order to make better choices and to authentically preach, teach and write about living justly, loving kindness and walking humbly with God, religious leaders must learn not only the biblical and theological tradition, but we must educate ourselves about alternative economic theories.

GOOD NEWS
The good news from GEM School is that alternative approaches such as pluralist economics, ecological economics and feminist economics exist. These schools of economic thought don’t reduce their measures of wealth and well-being to numbers and data. They argue for a normative vision that aims to use the knowledge gained in the numbers and data to benefit the common good — people and the planet.

I want to invite you into a conversation that is intended to bridge the world’s theology and its economics and to place these disciplines into lively, mutually beneficial conversation. My hope is that economic theories that offer normative visions for the benefit of the common good will be a topic for roundtable discussions in your church, college, university or theological school. I hope they will be considered essential to the required theological curriculum, so that religious leaders can wade out deeply into the world’s troubled seas and play a key role in the transformation of unjust economic systems.

ELIZABETH HINSON-HASTY is chair of the department of theology at Bellarmine University in Louisville, Kentucky. The church’s role in addressing issues of social and economic justice has long been one of her principal concerns.