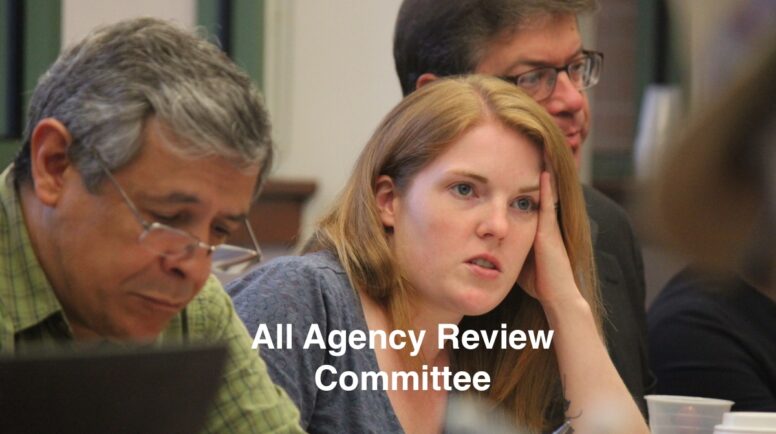 LOUISVILLE (Outlook) – With the idea of merging the Office of the General Assembly and the Presbyterian Mission Agency now off the table, what key issues or problems do these agencies continue to face?

That’s a question that the All Agency Review Committee (which is meeting in Louisville) asked Aug. 22 during a phone conversation with Ken Godshall, chair of the Presbyterian Mission Agency Board, and Barbara Gaddis, who chairs the Committee on the Office of the General Assembly (COGA). If merger isn’t the answer, what work still needs to be done?

“The church as a whole is concerned about the relationship” between the Office of the General Assembly (OGA) and the Presbyterian Mission Agency (PMA) – that’s at the heart of ongoing discussions involving shared services and the Presbyterian Church (U.S.A.), A Corporation, the denomination’s corporate entity, said Jim Wilson, an elder and lawyer from Ohio who serves on All Agency Review.

Both Godshall and Gaddis said they support the decision of All Agency Review and the Way Forward Commission, announced Aug. 21, not to merge OGA and PMA.

Godshall said he believes “you made the correct decision in not focusing on this as the solution to the many problems we have.”

The Presbyterian Mission Agency Review Committee raised the idea of a possible OGA-PMA merger in 2016. When that happened, the PMA board’s response was that “we have very significant issues and problems, including cultural issues, that we did not think would be resolved by such a merger,” Godshall said.

And “for COGA, we could never understand why that was a proposal to begin with,” Gaddis said. “It didn’t seem to solve any problems. In fact, it just reared its ugly head to make more problems. We think this is the absolutely right decision,” not to merge.

Given that, Deborah Block, a pastor from Milwaukee who serves as moderator of All Agency Review, asked: What are the problems that do need to be addressed?

Here are some of the answers.

PMA’s role
Godshall said, “first and foremost, I think the Presbyterian Mission Agency would benefit from a tighter definition of what its role is in the national church.” Over the last decade, PMA has lost half its revenue and almost 300 employees. At its next two meetings – in September 2017 and February 2018 – the board will consider recommendations from its Governance Task Force to make the board smaller (dropping from 40 voting members to 16) and to revise its committee structure.

“We are working very hard on the things that are within our control,” Godshall said. “We area very hopeful and excited about this time of change” – trying to spin off things (such as the Ghost Ranch Education and Retreat Center), or pending conversations about consolidating Congregational Ministries Publishing with the Presbyterian Publishing Corporation – that possibly other entities in the church can do better.

PMA has been criticized, however, in “our willingness and ability to work with other agencies of the church. We have been criticized for being hard to work with,” and having a negative culture at the agency’s national offices in Louisville,  he said.

Godshall said there’s an effort “to change the culture at PMA” to collaborate better with others, and to focus on fewer things that “we do really, really, really well.”

OGA finances and focus
Gaddis said OGA cannot continue to afford to pay the costs PMA currently charges for shared services. “The increase in what they cost us is simply not sustainable,” she said.

Together, All Agency Review and the Way Forward Commission have set up a six-person “Joint Working Group on Shared Services” that’s trying to resolve a series of questions about shared services – areas such as human resources or accounting, which serve both PMA and OGA. That work group has scheduled about 30 interviews with national staff members later this week, and hopes to produce recommendations by Sept. 20, just before the next Presbyterian Mission Agency Board meeting (set for Sept. 21-23 in Louisville). There was some acknowledgment, however, that this self-imposed deadline might prove difficult (or impossible) to achieve.

Gaddis said that J. Herbert Nelson, elected by General Assembly in 2016 to be the PC(USA)’s stated clerk “is very different” from his predecessor, Gradye Parsons. “We celebrate that,” Gaddis said, but there’s also an effort to determine how that changed vision should be implemented – including through changes in staffing for mid council leadership.

Marco Grimaldo, an All Agency Review member who’s a ruling elder from Washington D.C., said the committee has “a clear sense that there’s been a lack of clarity about what shared services means” – the work group hopes to get a better sense of that.

With shared services, “I’m not even sure exactly what we’re talking about,” Gaddis said. But the price is going up – as is the portion of the OGA budget going for shared services. At the COGA meeting last March, “it became very clear that we are going under financially if we continue to use the services the way that we are.”

The shared service work group “is long overdue,” Godhsall said, adding that “there is a great divide between perception and reality” on this matter. “This task may not be simple or easy.”

The board has a ministerial team working on this – which reported its preliminary conclusion last March, Godshall said, that “the centralized costs of the Presbyterian church are in line with other denominations and not excessively high.” Godshall said that Wendy Tajima, a synod executive who leads that ministerial team, also confirmed that the allocation of those costs by PMA to other PC(USA) agencies “are devilishly complex and basically fair.”

It’s not clear how those conclusions would address “the terrible cost pressure that OGA is experiencing,” Godshall said.

James Tse, a ruling elder from New York, said it’s not clear if the concern for OGA is partly that “they’re not in control of the services being offered” – that if they had more of a voice in how shared services are offered and priced, “there might not be this conflict.”

Wilson responded that “control is an issue. Living within your means is also an issue.”

Corporate structure
The work group also is trying to ascertain to what extent questions surrounding the governance of the corporate structure are affecting shared services – including whether OGA and PMA share the decision making, or whether there’s “a senior partner and a junior entity.”

At times, the PMA board convenes as the board of the A Corporation.

If the A Corporation makes decisions affecting both OGA and PMA, “is it structured in such a way that fairly represents OGA’s interest?” asked Grimaldo.

Godshall said the A Corporation “is probably the most under-discussed issue of the national church” and a different one than the shared services conversation. He encouraged both the All Agency Review and Way Forward Commission to consider questions involving A Corporation as “a separate, distinct challenge” – involving both governance and denominational finances, “a blend of legal and financial issues” that would be wise to review “if you can.

It’s also important to remember that the A Corporation is the Presbyterian Church (U.S.A.) A Corporation, “not a separate corporation that was named the A Corporation. That’s been our shorthand,” said Frank Spencer, president of the Board of Pensions. “It is the denominational legal entity.”

General Assembly
The committee also discussed the role that General Assembly plays in influencing PMA’s work and priorities – the 2016 assembly, for example, gave PMA more than 90 directives to which it must respond.

That led to a conversation about what might change at the assembly. “Every two years, we look at the way we do church at the General Assembly and try to figure out ways to make it more relational, make it easier for commissioners to navigate, easier for agnecies and others to navigate,” Gaddis said. For 2018, for example, OGA is considering how committees might start forming connections before the assembly convenes, perhaps electronically.

Here are some other ideas: Have fewer assembly committees. Present and vote on the PMA budget earlier, so if commissioners who propose new initiatives are aware they’re making changes in what the assembly has already approved. Give less time to what committee members described as “rah-rah” videos from PMA, instead providing more focused presentations informing commissioners about what the agency’s priorities are and why.

But Gaddis also reminded the committee that “one of the things we hold dear is the work of the Holy Spirit … how the Spirit works through the assembly.”

Continuing work
All Agency Review has the responsibility for reviewing the whole of the work of the six PC(USA) agencies – with individual agency reviews being conducted, two at a time, in the intervening six years. Godshall told the committee that the work of building connections and efficiencies in how the six agencies function “really is the big issue right now” – a forum for cooperation and for the PC(USA) to “do bigger, more painful things.”

Godshall encouraged the committee to write something in its report to the 2018 General Assembly suggesting that become ongoing work – “something of value that needs to be continued,” not done just every eight years.

Block said she’s beginning to sense that the committee may not just write a report – that “we’re putting something together that is as much a process as a product.”

If sorting through the A Corporation issues is a bigger matter than All Agency Review can complete in the time it has, the committee could ask the 2018 General Assembly to take that on – “to put wheels on it,” as she said.

The committee’s work is continuing Aug. 22 with discussion of mission directives for the PC(USA), next steps and filling vacancies on the committee.