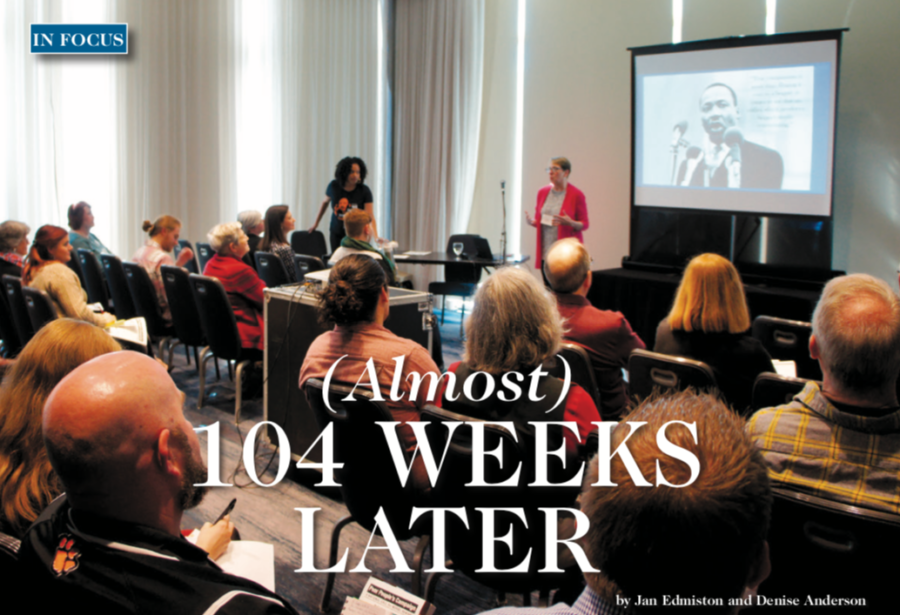 June 18, 2016, was the beginning of an excellent adventure. On election night at the 222nd General Assembly in Portland, Oregon, we declared that – if elected – we had two clear intentions for the next 104 weeks: to cast a vision of hope to the church we love and to hear your stories of faith. At this writing, those 104 weeks are soon coming to an end.

As the first co-moderators of any General Assembly, we have found the experience to be life-giving and fun. Our former moderator/vice moderator teams shared responsibilities as well but – as co-moderators – our partnership has been more deliberate. We found that being friends prior to standing as co-moderators served us well in terms of working together and trusting each other. Occasionally we were specifically invited by name, but usually we divided the invitations according to our individual schedules.

The two of us were rarely in the same place at the same time. One memorable weekend, however, we were both in Chicago on the same weekend with no Sunday responsibilities and we enjoyed multiple cups of coffee in Jan’s living room that Sabbath morning.

We have traveled internationally to Thailand, Rwanda, Syria, Lebanon, Italy, Cuba and Israel, and a common theme among all those travels involved walls. In Thailand, Denise stood outside the walls of a detention center that held undocumented residents, which resembled detention centers in the United States. She met with former enemies in Rwanda who have much to teach us about reconciliation after the seemingly impenetrable walls that led to genocide. In both Cuba and Palestine, Denise was particularly moved by the similar signage to build bridges not walls.

In Bose, Italy, Jan met with representatives of the Roman Catholic, Orthodox and Protestant denominations to discuss the ecclesiastical walls that keep women from being ordained to the office of deacons — at the invitation of the Roman Catholic Church. And in Lebanon and Syria, Jan observed the tragic results of the political divisions we have all observed in the media. We are blessed that – in this broken world – the church is deeply connected in countless ministries that inspire hope and resurrection across the globe.

We have also enjoyed presbytery and synod events that allowed us to meet a wide swath of church leaders and witness some of the amazing work of our mid councils. Jan was particularly moved by the meeting in Salem Presbytery lamenting late 19th and early 20th century lynchings, which had occurred within their presbytery bounds in North Carolina. There have been countless conversations with high school students, college students, Christian educators, seminarians and other church leaders regarding race and white privilege. We encouraged this by suggesting that the whole denomination read “Waking Up White” by Debby Irving during the first year of our tenure.

In the second year, we encouraged the denomination to read Liz Theoharis’ book “Always with Us?: What Jesus Really Said about the Poor” while also strongly urging everyone to participate in The Poor People’s Campaign: A National Call for Moral Revival under the leadership of Theoharis and William Barber. The intersection of racism, militarism and poverty continues to strip people of dignity in 2018 as it did in 1968. In this 50th anniversary of Martin Luther King Jr.’s Poor People’s Campaign, we hope that our nation will do more than commemorate King’s life and death. We – as God’s people – must continue to work “to transform the political, economic and moral structures of our country.” Serving the poor and powerless is at the core of what we believe as followers of Jesus.

With this in mind, we are grateful that the 2020 Vision Team has been asking, “What breaks God’s heart in our neighborhoods?” throughout the denomination. Clearly our nation seems overwhelmed by addiction, political division, lack of affordable housing, loneliness and consumerism. If our congregations are not addressing these issues in the name of Jesus Christ, we are missing out on clear opportunities to serve our neighbors. The growing congregations we have visited share a clear vision for mission, know the needs of their communities and partner with other denominations and other faith traditions to attend to those needs.

From “Undie Sunday” (collecting undergarments for homeless neighbors and stringing them on a clothesline in the front yard of the church building) to “welcome bags” for city newcomers who are possibly being trafficked, we have observed countless creative projects initiated by our churches.

In addition to these simple offerings by God’s people, we are grateful for all those who continue to grapple with the complex details of our wider ministry. Throughout our term as co-moderators, The Way Forward Commission (created by the 222nd General Assembly to study and identify a fresh function and structure of our six denominational agencies) has been working diligently and we look forward to hearing from them in St. Louis.

Through the ministries of all six agencies, we have observed firsthand not only the talented leadership of those who serve the wider church but also the participation of Presbyterians from every corner of the country. When 2017 brought an onslaught of earthquakes, fires, tornados and hurricanes, hundreds of thousands of dollars were donated through Presbyterian Disaster Assistance. Over $1,500,000 was granted to the presbyteries in Puerto Rico alone. In April, over 220 Presbyterians met in Washington, D.C., to be trained in compassion, peace, justice and ecumenical advocacy. Our Presbyterian Publishing Corporation continues to offer extraordinary resources — and one of the unknown benefits to us as co-moderators has been that we have been gifted with many of these new publications.

As most former General Assembly moderators and vice moderators will tell you, the experiences in this role are broad and unspeakably moving. We have been blessed to sit among board members, college students, seminarians, professors, mission co-workers, high schoolers, Christian educators and pastor nominating committees. All of them wonder out loud what the future of the church will look like.

Do we believe the Presbyterian Church (U.S.A.) will survive the huge culture shifts in which we find ourselves? Yes, we do — if we move forward with more faith than fear. The demographic and generational changes make us excited and hopeful. Our predominantly white denomination has a lot to learn from those who are not yet with us.

And so we invite you to join us in looking forward to what the 223rd General Assembly will bring. Please come to St. Louis prepared for the moving of the Spirit. We have observed the Spirit’s moving during our term and we have absolutely no doubt that God is not finished with the PC(USA) yet.

Denise Anderson and Jan Edmiston are the co-moderators of the 222nd General Assembly. Anderson is pastor of Unity Presbyterian Church in Temple Hills, Maryland. Edmiston is the executive presbyter of Charlotte Presbytery in North Carolina.