What role did white American Christians play in supporting and perpetuating slavery?

What lessons does the past have to offer the struggle for racial justice today?

William Yoo, an associate professor of American religion and cultural history at Columbia Theological Seminary in Decatur, Georgia, took questions August 6 during an online discussion with the Presbyterian Church (U.S.A.)’s ’s Special Committee on Racism, Truth and Reconciliation, which the General Assembly created in 2018 and which will report to the next assembly in 2022.

This was the second piece of a two-part conversation — following an Aug. 5 discussion on reparations with Presbyterian minister Mark Lomax.

In providing his answers, Yoo drew on an essay he wrote that’s posted on the Columbia Seminary website — an essay that examines the efforts of Presbyterian minister James Henley Thornwell to search for a “middle way” between condemning and extolling slavery – in other words, to avoid schism – and “to explain how the seminary actively perpetuated racial injustice and abjectly failed to repair the sins of slavery,” the essay states. (Also on the website: responses to what Yoo wrote, from Hilary N. Green, from John White and from Mitzi J. Smith, and Yoo’s response to what those writers said.)

In the movie “Frozen,” Elsa sings: “The past is in the past, let it go,” Yoo told the committee. But we know “the past isn’t just in the past, and it’s not something we can simply let go.” White Presbyterians need to understand that past, wrestle with it, engage with it, learn what to do now to bring justice.

Yoo cited the work of author James W. Loewen, whose book “Lies My Teacher Told Me: Everything Your American History Textbook Got Wrong,” surveys what history textbooks said about slavery. It’s often presented as “an uncaused tragedy,” a source of sadness but not real anger, Yoo said. “It just kind of happened.” People were enslaved, but in the books “there were not enslavers. There were not slave-holders.”

And many Presbyterians at that time focused on slavery as sort of a theological or intellectual problem – a question of how to interpret particular biblical words or concepts involving slavery – not as “a human rights issue” or a problem of racial prejudice, Yoo said.

Caitlin Rosenthal, an assistant professor of history at the University of California, Berkeley, has examined the business side of slavery — saying that plantation owners needed land, labor and capital, and enslaved persons were valuable both for the uncompensated labor they provided and as a material asset. In 1860, one young, healthy black male sold for $1,500, Yoo said. The children of enslaved persons were considered property.

The church was complicit in this system. Presbyterians and Episcopalians tended to be upper-class economically, which meant they were wealthier and more likely to own enslaved persons.

Ministers were “paralyzed by the planter class,” often unwilling to speak out against the practice of slavery, Yoo said.

And in some cases, both people in the pews on Sundays and their pastors were enslavers. Yoo cited the narrative of an enslaved woman owned by a Presbyterian minister in North Carolina. “She was beaten by the minster,” Yoo said, and “she was raped by a white man and had a child with him.”

Committee member Joe Scrivner asked about the doctrine of the “Spirituality of the Church” presented by Charles Hodge, a professor in the mid-1800s at Princeton Theological Seminary  — asking what influence that doctrine had then and now. Part of its legacy: the idea that the church is a strictly spiritual organization, responsible for such things as baptism and preaching, and “the church should not move into what they would call political endeavors,” Yoo said. That thinking was being used to keep Presbyterians from being more active in racial and social justice issues during the time of slavery — and “I think that continues” today.

While chattel slavery is gone in this country, “the consequences of slavery abound,” Yoo said, in anti-black police brutality, in structural racism, in systemic injustice, matters that require both a theological and a political response.

The “middle way” that Thornwell explored tried to consider how the systems that existed could be made more just, but not overturned, Yoo said. There was a sense that if the Bible spoke of slavery and God permitted it, then “can it be that evil? Can it be that awful?”

The idea was that “slavery was not essentially a sin, but there were incidental sins that occurred during slavery and we need to reform those sins,” he said. The greatest among them: that enslaved persons were not hearing the gospel or being given religious instruction. So the emphasis was on evangelism — not on ending injustice.

Later, Ernest Trice Thompson, a professor of Union Theological Seminary and a former editor of of the Presbyterian Outlook, pushed to expand the understanding of the Spirituality of the Church — arguing that what it means to be spiritual can include matters of poverty, economics and class, Yoo said. “The soul and the body need to have dignity, need to have a livable wage, need to have clean water, need to not fear authorities pounding at their doors. … Can we say evangelism is about all of that?”

One place it emerged historically was the question of what might be paid to white enslavers who freed the Blacks they owned — “for freeing what was legally their human property,” Yoo said.

Also: What needed to be provided for emancipated Black Americans to be able to succeed and to live?

Some white Presbyterians favored sending Blacks who had been freed to Liberia — somehow thinking that was a more sensible and faithful solution than working “to eradicate anti-Black racism in your midst,” Yoo said.

White Christians were uncomfortable with criticizing verses in the Bible that speak of slavery, or criticizing white founders and leaders of the nation who had owned slaves. Confronting that would mean being uncomfortable with “what it means to be Christian and what it means to be American,” Yoo said. If God and the church permitted slavery, “what does that say about life and God and who we are?”

Is there a way to calculate how much of the wealth of the Presbyterian Church today is tied to slavery? asked Marta Pumroy, who co-chairs the committee along with Byron Wade.

It would be mistake to think “it was so long ago and it was so complicated” — that no financial accounting could be done, Yoo said. “We know the valuation of enslaved persons” at the time, and what that translates into in today’s dollars. “Some Presbyterian congregations owned enslaved persons. My seminary owned enslaved persons.” Their dollar value and the labor they provided to the rice and cotton economies are avenues to get to calculating “what is owed.”

What can Black theology teach white Christians about reparations? Partly, how important it is to differentiate between Christ’s teachings and “what’s been perpetuated by people called Christians,” Yoo said.

Narratives written by enslaved persons show a willingness “to grapple honestly with what American Christians were doing in slavery.”

The full presentation can be viewed here: https://www.facebook.com/PCUSASpecialCommitteeRaceTruthReconciliation/videos/347583593071426/ 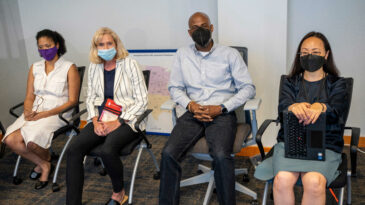