In this year of ministry during the COVID-19 pandemic – as churches have scrambled to move programming online and Christian educators have stretched new muscles to create meaningful connections from a distance – hope may seem further way than in more ordinary times.

But these ordinary times are really “extraordinary” times, Amy Kim Kyremes-Park told the group of church educators gathered for her plenary session of the Association of Presbyterian Church Educators on Feb. 6, the final day of the annual event (being held virtually this year with the theme “Anything but Ordinary Time”). Hope, she said, is something essential, yet sometimes elusive, during this unusual year.

Kyremes-Park is the director of children’s and family ministries at Grace Covenant Presbyterian Church in Asheville, North Carolina. When she talks to children in the church about the liturgical season of “ordinary time,” she said that likes to call it “extraordinary time.” The liturgical color for the season is green, and green represents growth. This is a year of unknowns and disruptions, she said, and what can be extraordinary about that is that it has been full of opportunities to grow.  “There is not a story of transformation in Scripture that does not first start with disruption,” Kyremes-Park said.

Kyremes-Park had asked other church educators to submit video clips recounting some of their experiences during this pandemic year.  “As an educator, there have been times when I have felt like a lesser part of the church,”Kyremes-Park shared.  So, in the videos, the contributors were invited to tell their own stories, in clips in which they were introduced using only their first names.  Here is some of what they shared about the disruption the pandemic caused:

Kyremes-Park introduced herself as a third-generation, Latinx Presbyterian from Utah (“said no one ever,” she quipped).  Her grandfather was a graduate of Menaul School, a Presbyterian middle and high school in New Mexico.  Out of gratitude for the education he received there, he committed to raise his family of 10 children Presbyterian.  Of those 10 siblings, seven became ruling elders — including Kyremes-Park’s mother. 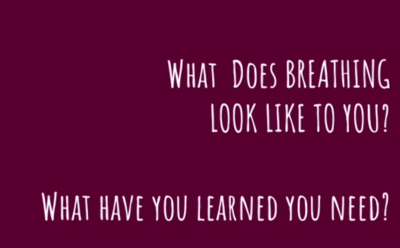 In Utah, Kyremes-Park grew up with a faith background different from many others in the community – and through that she learned some of the challenges of working through complexities, and of the tools that are needed. “The work untangling all of that is life-long,” she said. Like untangling a ribbon, a necklace or a child’s hair, you have to start at the end and “work your way toward the center” or else it makes more tangles. So, Kyremes-Park recognized the need to find tools to sustain her.  “God has given me a lot of space to think through and cultivate this toolbox,” she said before asking participants to consider what tools they need to allow for breathing space and to untwist the tangles in their lives.

Some of the answers noted in the Zoom chat were:

“Breathing is at the core of my toolbox,” Kyremes-Park said and she led the group in a brief breathing exercise she has found helpful. She noted that music and movement have been important tools for her and she led a virtual APCE dance party, inviting participants to get up and dance as they are able “This is not a time to check email!” she cautioned.

Her toolbox has been important when encountering unexpected pain. Kyremes-Park shared a traumatic encounter from the previous year. During a youth event at the church, there was a moment when the sound of happy, chattering kids turned to chaos.  Kyremes-Park entered the room to ask why it had gotten so loud — expecting the help the youth settle down. Instead, she found that a child’s babysitter had been stabbed, and a woman she did not recognize was walking away — still holding the knife.  With the help of another volunteer, they took away the knife, called the authorities and gave thanks it did not end any worse than it had.  However, the effects remained — and there was a deep need for healing, lots of processing and, yes, untangling what had happened.

“One person got stabbed, but the community was the victim,” Kyremes-Park remembered. She later learned how the woman with the knife struggled with mental illness and had previously attempted a similar attack. At the court hearing, Kyremes-Park was able to say to the woman’s parents that she was praying for them.  The parents said they knew that this was true — because they knew people who attended the church and knew that the congregation was committed to praying for their daughter.  This was a step toward reconciliation, Kyremes-Park said — and toward planting hope for a different way forward.

Church educators are “essential to the work of planting and sustaining hope” in churches and in the world, Kyremes-Park told conference attendees.

“Siblings, I am so thankful for the hope that is being cultivated in all of us” – for imagination, for the abundance that God draws forth, she said in closing.  “Remember that God is near, moving in and through you as you” nurture the faith of children and adults alike in congregations. “Remember always that you are not alone.”