The Committee on the Office of the General Assembly (COGA) considered a “first read” on a series of documents that would shape the 2022 General Assembly — with a formal vote on those proposals to come at COGA’s next online meeting, April 13-16.

Some of the big takeaways from the draft proposals, which COGA work groups presented in a Zoom meeting March 18, are that: 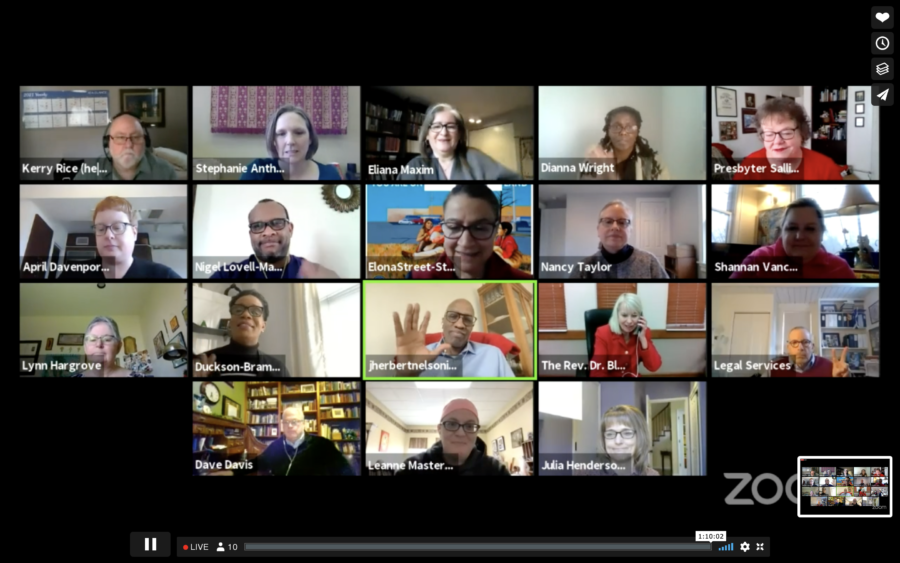 The proposed docket would be as follows — with some specifics yet to be determined.

J. Herbert Nelson, stated clerk of the Presbyterian Church (U.S.A.), said he wants this assembly to have significant opportunities for learning the significance of Juneteenth – which commemorates the formal ending of slavery in the United States – and for interacting with people involved with community activism and justice work in Louisville. “We’re still in the midst of turmoil here in Louisville,” following the police killing of Breonna Taylor in March 2020, Nelson said.

He wants to look for ways to “extend the assembly beyond the assembly,” as commissioners translate what they’ve learned into action back home. “God’s put us here in a moment that quite frankly could not be designed by us,” Nelson said.

He stressed the importance of prayer, discernment and a willingness to take risks, saying, “It’s not just the technical mechanics” of planning an assembly, “but what we have in our souls that will lead us.”

In presenting the work of the “Process and Discernment” Working Group, COGA member Leanne Masters said the group is looking for ways to build community and trust among commissioners and advisory delegates.

Another concern: how to make things equitable in presentations to committees.

By having all presentations for open hearings and from overture advocates be made virtually, that evens things out for Presbyterians who might not have money to travel to Louisville, Masters said. “We don’t want to turn it into a financial race to see who has the funds to speak to a committee in-person,” or to stay through two weeks of committee hearings.

Shannan Vance-Ocampo, vice chair of the Presbyterian Mission Agency Board, asked how COGA will ensure that commissioners actually put in the time to listen to the video presentations for the open hearings — since they’ll be expected to listen to watch those ahead of time and not during committee meetings.

Vance-Ocampo said she could see that being an issue — as a presbytery leader, she knows that not everyone reads or views all the materials for presbytery meetings ahead of time. “I just worry, knowing people,” she said.

Because the committee meetings will be held in person in Louisville, work needs to be done to reconfigure the denomination’s national office building in downtown Louisville to create space — work that’s being done on a tight timeline and that may cost about $1 million, Kathy Lueckert, the president of the PC(USA), A Corporation, has estimated.

Kerry Rice, the PC(USA)’s deputy stated clerk, told COGA that the plan is to renovate space on the first and third floors of the building at 100 Witherspoon Street to create a production studio and space for four General Assembly committees to meet simultaneously. Rice said the PC(USA) also is initiating conversations with several hotels in proximity to the building to see if they might be interested in using that meeting space at times when the assembly is not meeting; considering how other Presbyterian groups and community nonprofits might use the space; and exploring whether there may be opportunities for leasing some of the reconfigured space as well, particularly if some PC(USA) staff members continue working remotely even after the COVID-19 pandemic ends.

“It’s very exciting, lots of opportunities,” Rice said. He expects construction to begin in late summer and for the physical work to be completed by April 2022.

COGA member Leon Lovell-Martin asked whether the work has included a feasibility study to assess the need for additional office space in downtown Louisville.

Lueckert said there have been conversations with a commercial real estate broker who has been seeking tenants for vacant space inside the PC(USA) center. The building has “quite a bit of vacant space,” Lueckert said, and the downtown market is for office space is “pretty depressed right now.” The broker, however, hopes that will turn around in the next few years, she said.

A video recording of this meeting is available here.