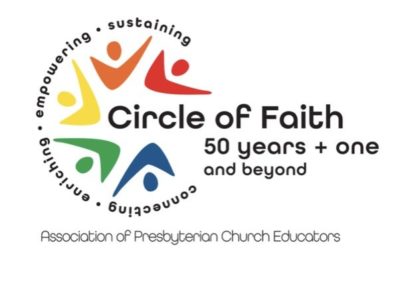 This past week, roughly 550 Christian educators gathered in person (with more than 200 joining online) in Chicago, Illinois, for the annual meeting of APCE. Some important business came out of this meeting: The name was officially changed from the Association of Presbyterian Church Educators to the Association of Partners in Christian Education, new officers assumed their positions, and the organization celebrated “50+1 years.” But the meeting was about more than business.

The goal of these four days in Chicago was to connect, enrich, empower and sustain. In a video reflecting on the 50+1 years of APCE, church educators spoke about the importance of this annual event as a time to learn new educational trends, celebrate their common call to serve Jesus in education and cultivate their imagination. It is a place for church educators to be seen and celebrated, and they were.

As the newly elected Executive Presbyter of The Presbytery of Chicago Craig Howard quipped, “the greatest problems of the world could just be solved if everybody went to Sunday School!”

This year’s theme Circle of Faith, built largely upon Hebrews 11, was explored from different angles in worship, preaching, and breakout sessions. Being a circle of faith requires looking back and holding a connection to the people who spiritually formed you. Those spiritual giants from the canon who have captivated us with their boldness and, as Shannon Kershner pointed out on the first night, their human frailty. It can also mean remembering the teachers in our own life. As Jacqui Lewis of Middle Church in New York City said of her own life, “I’m an author and preacher today because of Mrs. Dixon because of Valerie Murphy …  because of people like you.”

McCormick Theological Seminary Professor Lis Valle built upon this concept further by inviting participants to share the names of personal, unnamed heroes on pieces of paper as they walked around the room.

However, circles can also be widened. And this was another important message across the conference. Participants were asked to seek and use new lenses to engage with the world and expand their circle.

This requires risk. But, as Ozzie Smith, the pastor emeritus of Covenant United Church of Christ in Holland, Illinois, said during his sermon, risk is inherently related to faith: “Risk is faith with skin on it. Risk refuses to hide. Risk is faith uncut.” Building upon this interpretation, Lewis added, “Our job is to baptize our people from infancy until their death into a risky faith that can imagine good news for all those poor in spirit.”

Expanding circles also means setting aside our own privilege. As Valle put it: “Sometimes, we are to be the hero that is empowered and empowers others. Other times, we empower better when we notice the power of others. Other times, we empower better when we see our power aside.” Moravian pastor and founder of Anthony’s Plot Russ May built on this thought in his response to Valle’s sermon by speaking about active bystandership — learning to set aside the “paralyzing paradoxes” of power to care for others in real ways. “We (the White church) need to set conventions aside,” he said. “This is our biggest challenge.”

The preaching and teaching of APCE were introduced, highlighted, and reflected upon through the music of Mark Miller, who currently serves on the faculty of Drew University and the Institute of Sacred Music at Yale University.

The musical list included many songs penned by Miller and friends that spoke to the same themes of the preachers including “Come Out:” “Come out! Come out of your comfortable spaces. Come, meet Jesus in difficult places.” These songs were mixed with lyrics from around the world, several hymnal favorites, and a couple of musical interludes from Jackson 5, Journey, and others.

When participants were not in worship, they were invited to select and attend workshops from a list of over 60 that spoke to the diverse ministry settings and interests of APCE participants. Here are a couple of glimpses.

Drawing Our Circles Wider allowed retired McCormick Seminary professors Lib Caldwell and Ted Hiebert to share Genesis stories from their published children’s books, as well as from those still in development.

“Your way into the Bible story could come from many perspectives,” explained Caldwell, as she shared their efforts to bridge the gap between the world of the Bible and today’s child. Biblical writers lived in an agricultural world, for example, so connecting kids with the experience of a farmer’s market, planting a seed or even eating pizza can help them wonder about the creation of the world.

In Spirituality in our Third 30, Chris Pomfret discussed how churches can better minister to those in their later stages of life. Participant Charlotte McGowan appreciated the candid discussion about how churches can “open the door and invite” older adults to explore their own spirituality without falling into the trap that “our job as educators is to ‘improve’ everyone’s spirituality,” as though faith is a “ladder,” and older folks need to attain a spot at the top.

Bridging the Gaps brought both virtual and local participants into discussion with the host city’s community. Director of Faith-Based Initiatives from Chicago Public Schools, Alan Conley described how his ministries have always been about reaching kids (and their families) where they are.

“Evangelism was never about inviting people to come to church —it was about bringing good news to people who needed to hear it,” he said. So what happens when churches can’t operate the ways we used to? Conley suggested that churches “grow their village” by understanding their neighbors, listening to them and engaging with them in a way that meets their needs. In Chicago, this has meant churches serving as “Safe Havens” for families who need their children to be safe and engaged after school or on summer break, for example.

A New Lens on Gender, led by the PC(USA) Coordinator for Gender and Racial Justice Shanea D. Leonard, created a space to learn more about sex, gender, sexual orientation, identity, and gender expression. The safe space also allowed participants to share ministry questions and troubleshoot answers such as, how do you do an overnight trip when your youth group includes trans teenagers?

Mark Eldred, the pastor of Bardstown Road Presbyterian Church in Louisville, Kentucky, was one of over 200 people to join the conference from home. “Sometimes not having to travel is a blessing,” Eldred said. In a normal year, Eldred’s continuing education budget might allow for a single conference, but 2021 included multiple virtual conferences.

While Eldred misses the human interactions, he notes that some APCE workshops had as many as 70 virtual participants, outnumbering those in the room. Virtual participants had fewer breakouts from which to choose, but those sessions included ongoing “chat” features for dialogue among online participants. A Zoom moderator also lifted up the questions for speakers to respond in the room.

APCE’s 2022 annual event also carried on the tradition of honoring and celebrating Christian educators. Gina Yeager-Buckley received the 2022 ENRICH — Educator of the Year award for her long career in Christian education, including her current role as mission associate for Christian formation — youth/Presbyterian youth triennium within the Presbyterian Mission Agency.

Lastly, Leah Wyckoff was awarded the EMPOWER award for her work to empower others to engage in ministry as a part-time educator for First Presbyterian Church of Fort Worth, Texas, and her part-time work as the director of Grace Presbyterian’s Resource Center.

This story was made possible with the reporting of Amy Pagliarella, Outlook’s book review editor. 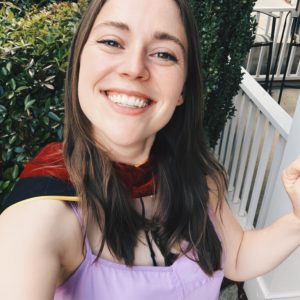 Rose Schrott Taylor is the interim associate editor at Presbyterian Outlook. She lives in Pittsburgh, Pennsylvania, and loves to bake, fuss over her houseplants and cuddle on the couch with her husband Christopher and their dog Huebert.