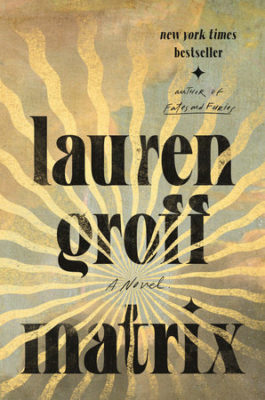 Lauren Groff’s Matrix is a fictional account of the life of Marie de France, a 12th-century poet and fabulist who may have been the Abbess of Shaftesbury. Almost nothing is known of the real Marie, but Groff has imagined her as a mighty fortress of a woman, large in size, intellect, passion and thirst for power. Groff’s Marie had expected a career in the court of Eleanor of Aquitaine, but Eleanor sends Marie away to be prioress of an impoverished, disease-ridden English abbey, consigning her to a life for which she believes she has no vocation — she is uninterested in the “tripartite god of parent and child and ghost.”

Marie, who believes she is destined for greatness, uses her anger, energy and canniness to take the abbey in hand and transform it. After she is elevated to abbess, she has a series of visions, most of which she interprets as the impetus for a building project. Her aim is first to seclude the abbey from the traffic of the corrupt and brutish world outside (the nuns must go into town to give alms) and then to enrich and enlarge the abbey’s buildings and land. Hidden within a labyrinth of trees and vines and underground passages, the abbey becomes an island unto itself where all within – including the mad and misfit – are cared and provided for. It grows in wealth and influence, expanding its numbers and attracting daughters of the nobility into the novitiate. Marie is adept at avoiding her diocesan superiors and marshaling the resources of the nuns for her projects — in many ways, she is a visionary leader, rejecting traditional monastic teachings about humility and assigning her nuns work that they will be good at and can take pleasure in. At the same time, she allows herself spiritual and intellectual freedom that she denies the sisters.

Marie’s theology is focused almost entirely on the Virgin Mary. Reflecting on one of her visions, Marie perceives that Eve is “the first matrix [mother], but Mary is the greatest matrix because she is also salvatrix” — Mary is savior, not Jesus, whose name is never mentioned in the novel. Marie’s theology, as many of her monastic daughters recognize, is heretical, and they are uneasy about the prospect that it might be found out, to the ruin of the abbey.

In the world Groff portrays, men are known only by their intrusions – the micromanaging diocesan superiors, the town thugs who rise up against the abbey and its wealth – and in Marie’s estimation they are “the far worser sex.” None of these male persons are ever named, they are simply shadowy, unwanted presences; in fact, not a single male pronoun is used in the entire novel. Even the animal characters are all female – there are heifers, ewes, and mares, but no bulls, rams, or stallions. This authorial decision, along with its feminist theological ruminations, makes the book feel over-polemical to the point of silliness at times; yet this tendency is counterbalanced by the complexity of the female characters, their mix of virtue and everyday sinfulness and the delicious quirks of their personalities.

In the character of Marie, the novel engages perennial questions about the legitimate (not to say Christian) uses of power. The age-old tension between the bureaucratic and the visionary, between competence and greatness, is especially illuminated in the last chapter of the novel, which includes a scene of devastating irony about the way the great are remembered.

Groff’s writing is stunning. She evokes with equal clarity the movements of Marie’s mind and soul and the physical world of medieval England: boggy mists, mud and smoke, smells of grass, manure and unwashed bodies, as well as golden fields and piercingly blue skies. The novel is a tribute to the beauty of a life of prayer and works in community — at one point, Marie reflects on the sung prayer of the nuns as a force that holds the world in place against the gates of hell. It is especially a celebration of contradictions that don’t need to be reconciled: “The world holds a deep and pulsing terror at its center. The world is ecstatic in its very deeps.”

Presbyterian Outlook supports local bookstores. Join us! Click on the link below to purchase Matrix from BookShop, an online bookstore with a mission to financially support local, independent bookstores. As an affiliate, Outlook will also earn a commission from your purchase.