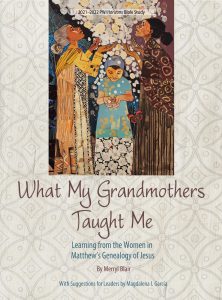 Power corrupts. In this section’s readings, David chooses to stay home instead of following tradition and fighting with his troops. While at home, he uses his power to take what is not his.

One afternoon, David walks on his roof and sees a beautiful woman. Ignoring that Bathsheba is married to Uriah, one of David’s elite fighters, “David sent messengers to get her, and she came to him, and he lay with her” (2 Samuel 11:4). However, the Hebrew words are better translated, “David sent messengers to take her.” (According to Merryl Blair in What My Grandmothers Taught Me, “the verb here is quite deliberate, often used for rape.”)

Seventh-century painter Rembrandt van Rijn did a poignant rendering of Bathsheba in the moments after she is summoned. Holding a letter from David, she looks quite sad. There is nothing calculating in Bathsheba’s face and no pleasure to do David’s bidding.

Normally, powerful men get away with sexual harassment and assault. It is all too commonplace to read about coaches, film producers, teachers, doctors, church leaders, military personnel or politicians who have been accused of sexual assault. Some have been convicted. But for years, when a male leader’s sexual abuse or assault was reported to authorities, institutions chose to do nothing. 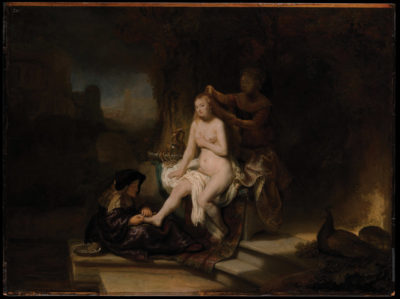 Bathsheba’s only words to David are, “I am pregnant.” David then goes to great lengths to cover up his actions, ultimately orchestrating Uriah’s death and marrying Bathsheba.

Lest we think that this story only applies to people of great power, we should pause and think of the times when we have used another person as a means for our ends. We may have failed to give credit where credit is due or trash-talked someone else to make ourselves look good. We each have a measure of power, particularly in what we say, and the potential to abuse that power.

We also, like David, seek to cover up our wrongdoing. We lie about misdeeds. We get defensive. We deny that we have done anything wrong.

God is angry at the evil that David has done and sends the prophet Nathan to convict him: “You are the man” (2 Samuel 2:7). Instead of a denial, David acknowledges his sin. He accepts God’s punishment as just. God’s judgement also restores David to himself as a king who follows God.

In The New Interpreter’s Bible, Bruce C. Birch points out that both David and Nathan are in and represent the community of faith. Within the church, we are all sinners and the redeemed. Like Nathan, the church is to proclaim the justice and judgement of God on those people and systems that oppress others. But, like David, the church is also called to “receive and acknowledge judgement for its own participation in the conditions that create brokenness.”

We end up knowing nothing of Bathsheba’s thoughts and feelings. No doubt, she grieves terribly when her first child born to David dies. Towards the end of her biblical narrative, Bathsheba finds her voice. She emerges, years later, as the advocate for her second son Solomon when the eldest royal son, Adonijah, stages a coup. It is a situation filled with danger for Solomon, Bathsheba and the nation. With Nathan, Bathsheba enables a smooth transfer of power, averting a possible civil war.