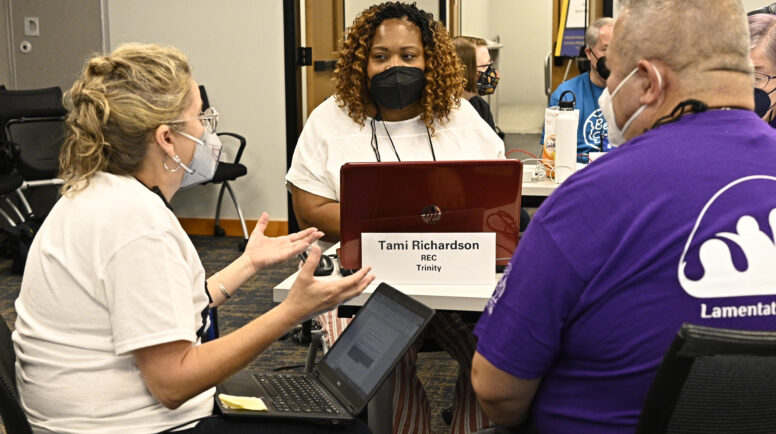 Tami Richardson (REC-Trinity) during a small group discussion of the Theology, Worship, and Education Committee. Photo by Jonathan Watson for Presbyterian Outlook.

Louisville, Kentucky — The 225th General Assembly is like no other. It is called a “hybrid” General Assembly with final plenaries all conducted remotely on Zoom. However, the committee work is combined in-person and on-line with overture advocates and resource persons both remote and in-person. The commissioners themselves are meeting in-person for their committee meetings, coming in waves with four committees meeting simultaneously in different rooms in the building for three days at time over the course of two weeks at 100 Witherspoon Street.

Everyone in the building had to provide proof of vaccination and all are required to wear N-95 or KN-95 masks. The rooms where committees are meeting have been specially designed and equipped to facilitate hybrid meetings, so the commissioners are surrounded by cameras and technology, good ventilation, and the rooms are cleaned each night. The Office of the General Assembly technology team and the committee leadership are all doing their best to create a meaningful and engaging committee meeting experience in this context. Here is the story of one of those committees.

The Theology, Worship, and Education (TWE) committee started their meeting at 8:15am on Monday, June 20 with opening worship. Vice Moderator, Teaching Elder Eniko Ferenczy, invited the committee members into a time of worship by encouraging them to remember who they are and whose they are, and she prayed in both English and her native language, Hungarian. The scripture reading was 1 Corinthians 12 which describes the different gifts of the spirit, followed by small group reflection questions asking the committee members what resonates with them from the scripture passage and what their prayer is for the committee. Each committee started its meeting with worship, and the committee leadership helped pick and shape the prayers and resources that were part of the opening worship.

Committee Moderator Teaching Elder Joseph Scrivner then led an icebreaker activity by passing around rolls of toilet paper and inviting the participants to tear off as many squares as they wanted without telling them what it would be used for. Once they had the toilet paper, they were instructed to write one thing about themselves on each square they had torn off and to share their details with each other to get to know one another. Each committee was encouraged to do some form of community building, but what that looked like was up to the discretion of the committee leadership.

The committee discussed their covenant grounded on an “equity primes” card handout that reads, “We each have a choice… to be a voice for equity and inclusion.” Each committee has included this card as part of their committee orientation and covenant making. After describing the covenants and expectations, Ferenczy acknowledged that committee work can be challenging, so she shared a “breath prayer” from the Enfleshed liturgy, a personal addition to the covenant making process from Ferenczy.

The committee was then introduced to parliamentary procedure and the agenda, led by the Parliamentarian, Ruling Elder Bronwen Boswell. Despite the committee meeting in-person, the hybrid format with overture advocates appearing remotely and the need to livestream means that each committee member is sitting in front their computer with headphones and connected via Zoom. When an observer walks into the room, it can be completely silent if the committee is hearing from an overture advocate via Zoom, which can be disorienting. Boswell explained that all of the formal parliamentary procedure will be done by computer including recognition of questions and speakers. Overture advocates and resource people presented throughout the day both in-person and remotely. Boswell encouraged patience, grace and humor with the process.

The committee took a break and then started the formal business of the committee at 10:10am. At this point, the livestream was turned on so anyone in the world with an internet connection could observe the proceedings of the committee, which reflects a commitment to transparency. On the first day, the livestream worked well, but the PC-Biz website where the commissioners were supposed to interact, make motions, and vote electronically got bogged down early in the first session, so rather than using technology to vote, the committee voted by raising their hands with the parliamentarian writing down the outcome of the vote on a pad of paper.

The committee continued to consider business throughout the day with minor technology issues. They discovered that faithfully abiding by Robert’s Rules of Order in a hybrid meeting is challenging. Keeping track of where various motions are and attempting to make amendments is complicated in normal circumstances, and even harder in a hybrid format, but the committee persisted and worked through their agenda the entire day.

As the meeting concluded, commissioners still displayed a lot of good energy, who broke into applause at the passage of each resolution. In the center of the room an artistic display had been brought in and set up by Ferenczy which reflected the positive spirit and energy in the room. She designed the sculpture with other teaching elders in Muskingum Valley and said the hands reflected the season of Pentecost and hands reaching up in prayer and praise. This sculpture anchored the front of the committee room. All the committee leaders were given the flexibility to add elements like this to their rooms and committee meetings.

On day two of the hybrid committee meetings, it was announced that the newly elected co-moderator, Ruth Santana-Grace, had tested positive for COVID-19. The Deputy Stated Clerk Kerry Rice shared the update with the committee in person. This news led to a change in the room layout for day three with the commissioners spread out to provide more room for social distancing, as well as a delay in starting the committee meeting as some commissioners had stopped by the medical room to be tested, providing a reminder of why a hybrid format was chosen for this General Assembly.

While there were complications and challenges, many staff members commented that this was better than the 224th General Assembly in 2020 which was held entirely on-line. As one commissioner said, “This hybrid format of General Assembly is an experiment in technology, humanity, and the work of the Holy Spirit.”