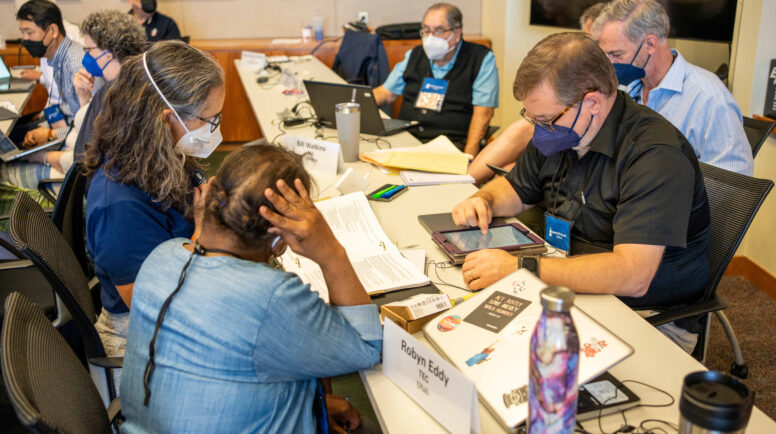 Commissioners meet in small groups during the Ecumenical and Interfaith Engagement Committee meeting. Photo by Gregg Brekke for Presbyterian Outlook.

Louisville, Kentucky – The 225th General Assembly’s Ecumenical and Interfaith Engagement Committee today advanced a proposal on “local sharing of ministries” between the Presbyterian Church (U.S.A.) and the Episcopal Church.

By a vote of 25-1, the committee received “with gratitude” the report from the dialogue team that has been working since the 2018 Assembly on the third round of talks between the two denominations. It also commended the proposed agreement to all Presbyterians for study and comment between now and the end of this year and encouraged those studying the agreement to utilize the raft of resources that have been produced by the dialogue process over a number of years.

The final report of the dialogue is scheduled to be submitted to the 226th General Assembly in 2026.

The first two rounds of the dialogue produced agreements on episcope (the nature of the church), polity, theology, the nature and meaning of church membership and “the ministries and missions that already exist between the two bodies.”

Neal Presa, former General Assembly moderator and co-vice chair of the bilateral dialogue, said the third round of the dialogue “was able to establish that our communions could work toward a path of increased ministry together, especially in the localities where there is great need for collegial partnership, whether in more rural areas or in urban or ethnic ministries.”

The dialogue participants, Presa added, “are seeking interchangeability such as we have with our full-communion partners.” Since 1997, the PC(USA) is in “full communion” with the Evangelical Lutheran Church in America, the United Church of Christ and the Reformed Church in America.

The committee also recommended on Monday that the assembly adopt a commissioners resolution (ECU-08) calling for PC(USA) representatives to the World Council of Churches (WCC) to press the world’s largest ecumenical body “to place a high priority on addressing the concrete strategies and actions that demonstrate its solidarity with Palestinian Christians.”

Specifically, the resolution directs the PC(USA) delegation to the upcoming 11th Assembly of the WCC in Karlsruhe, Germany, in late August and early September “to pursue these concerns” at the gathering and to call upon the WCC and its member churches “to fearlessly and faithfully adhere to its values and promises already established by the WCC and to stand in firm solidarity with Palestinian Christians.”

In 2007, the WCC made a commitment in the Amman Call to stand with the Palestinian community, and the churches of Palestinian Christians in particular, by affirming three operating values and principles:

Palestinian Christians in the West Bank, Gaza, and Israel have repeatedly asked the global churches and Christians to take decisive and strategic actions to support, defend and ensure their freedom, human rights and security as Palestinians. “If we say that we are our brother’s keeper, it is imperative that we take action to demonstrate the words we say,” the resolution states. “We can no longer quote scripture; we must live into the words. The actions requested in this resolution give full and complete opportunity for us to ‘be our brother’s keeper.’”

Luciano Kovacs, the PC(USA)’s regional coordinator for Europe and the Middle East, said the resolution “speaks to the need for action beyond more statements.” Peter Prove of the WCC said the council thoroughly welcomes this initiative. “What we need is ideas, plans and resources to support the Palestinian people,” he said.

With one amendment, the committee voted 26-1 to approve the resolution.