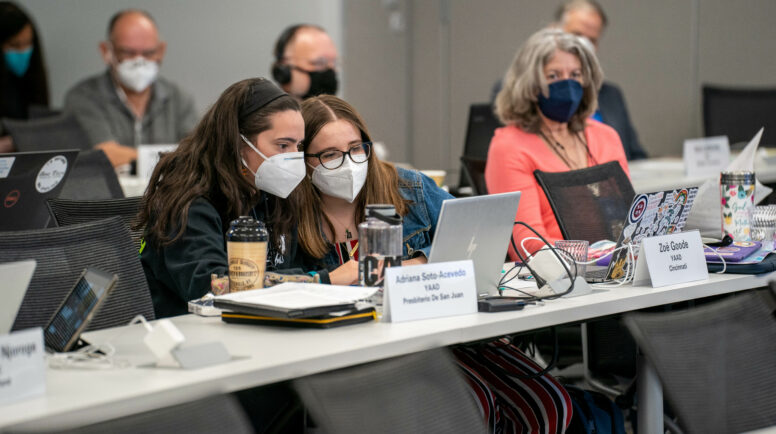 Louisville, Kentucky – With just a handful of amendments, the Moving Forward/Vision 2020 Committee unanimously approved a “Guiding Statement” for the Presbyterian Church (U.S.A.). The statement, which has been in development since 2016, now goes to the full 225th General Assembly for adoption.

The one-page statement is structured around five attributes that the 2020 Vision Team says the PC(USA) is called to be: Prayerful, Courageous, United, Serving and Alive. Together, the first letters of the five attributes spell out PCUSA.

Charles Wiley, who served as staff in the Theology, Worship and Education office at the time the 2020 Vision Team began its work, presented a brief survey of Presbyterian history in the 19th and 20th centuries. “Why the proliferation of vision statements in the church and corporate America?” Wiley said.

“People want to be inspired about being Presbyterian. People want help with decision-making and believe a good vision statement would make that easier,” he said. Noting that the PC(USA), like most denominations, has been in decline since its highwater membership in 1965 of 4.5 million members,” Wiley acknowledged that “it’s always hard to make decisions during decline. There are hard choices when there’s not money for everything.”

That stress has created over the years “a visceral call for clearer vision statements,” Wiley said. “Presbyterians want a sharper sense of who we are and where we’re going.”

Vision 2020 Team Co-moderator Sabrina Slater of Geneva Presbytery emphasized that the document is a guiding statement, not a vision statement. “We present this to the church as a framework for engaging the church in visioning at all levels,” she said, adding that the denomination’s Matthew 25 Initiative “embodies the calls in the Guiding Statement to be prayerful, courageous, united, serving and alive. We hope the Guiding Statement will align us with Jesus Christ.”

Her co-moderator, Salvador Gavalda of Heartland Presbytery, said the Vision 2020 Team “felt the most power when we were reading the statement aloud, studying it and applying it to various forms of ministry.” He said the team has encouraged churches and other groups to use the statement liturgically, as a preaching tool, in liturgical dance, confirmation and new members classes, and Christian education settings.

Corey Schlosser-Hall, deputy executive director of Vision, Rebuilding and Innovation for the Presbyterian Mission Agency praised the team and the Guiding Statement. “We have admired the work of this team,” he said. “There’s an obvious connection between the Guiding Statement and Matthew 25,” Schlosser-Hall added.  “These two efforts are complementary and synergistic — they describe who we are and how we’ll be with each other.”

The committee ran out of time and was unable to complete enabling motions designed to distribute the Guiding Statement widely in the church, create additional resources, including curricula, for all entities of the PC(USA), and to set the stage for additional vision statements in the future, perhaps as early as 2030. It reconvenes Friday morning.