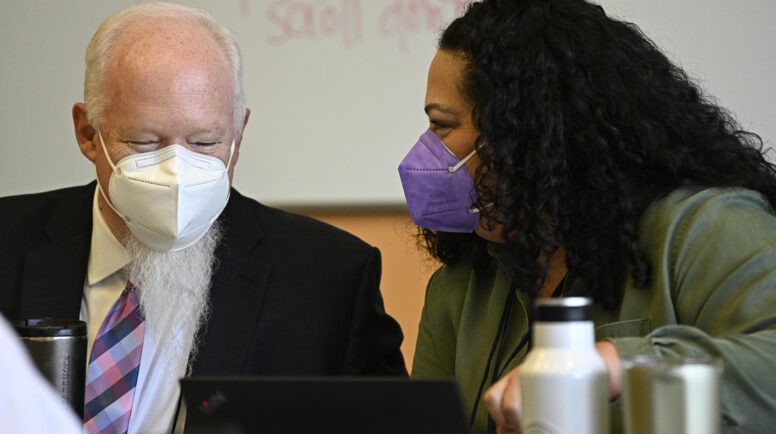 The Rules of Discipline Committee meeting on June 21. On the left, Forrest Claassen (ACC). On the right, Flor Velez-Diaz (Committee Resource). Photo by Jonathan Watson for Presbyterian Outlook.

Louisville, Kentucky – The Rules of Discipline Committee of the 225th General Assembly today unanimously approved and forwarded to the full assembly the first major revision of the Presbyterian Church (U.S.A.)’s constitutional section on internal discipline since 1996. The final committee vote was 24-0.

The committee’s line-by-line review of the 73-page, 3,000-line revision was greatly abetted by unusually close collaboration between the assembly’s Rules of Discipline Task Force – appointed in 2016 – and the denomination’s Advisory Committee on the Constitution (ACC), which offered 31 mostly technical amendments. All the ACC’s proposals were adopted and incorporated into the final document.

Clearly impressed with the combined efforts, the committee approved the new document, now called Church Discipline, “with thanks to the Rules of Discipline Task Force, the Advisory Committee on the Constitution, and our committee’s leadership.” Led by Moderator Robert L. Brashear of New York City Presbytery and Vice-moderator Edie Mabanglo of Seattle Presbytery, the committee completed its work several hours ahead of schedule.

Paige McRight, chair of the Rules of Discipline Task Force, noted, “The work the ACC has done on this document is making it much more accessible to the church and for that we thank the ACC.” Despite its call for multiple amendments, the ACC endorsed the revision.

Most of the adopted amendments related to terminology or the timing and sequence of judicial processes. One significant change to D-5.0301 of the new document preserves the acceptability of hearsay testimony in remedial cases. Instead of the task force’s recommendation that “fact witnesses in remedial process shall have firsthand knowledge” the committee adopted, by a 22-3 vote, ACC language that such witnesses “should have firsthand knowledge.”

When the 222nd General Assembly (2016) created the Rules of Discipline Task Force in response to an overture from Chicago Presbytery, it was charged “to make the Rules of Discipline more accessible to the church, to preserve and enhance the accountability of councils and individuals to the church, to expand the role of mediation and alternate dispute resolution, and to provide flexibility in crafting censures and remedies, particularly in light of recent learnings in ethical and social development and experiments by the secular legal system with alternative sentencing.”

Key provisions of the revised Church Discipline, outlined by McRight, include the removal of all time limits for reporting allegations (currently there is a five-year statute of limitations on all offenses except sexual misconduct cases), changes to the Form of Government covering electronic meetings and notification to a congregation by its session of a disciplinary decision involving a church member, and increased emphasis on alternate forms of conflict resolution and discipline, using agents such as mediators.

McRight said the revision of the denomination’s policies and procedures for handling church discipline are long overdue. “So much has changed in both the church and society (since the 1996 revision) that we believe one of our major goals has been to restore trust within the PC(USA) community,” she said.

“Trust in institutions is fragile,” McRight told the committee. “Discipline is important to show the world we care about justice.”