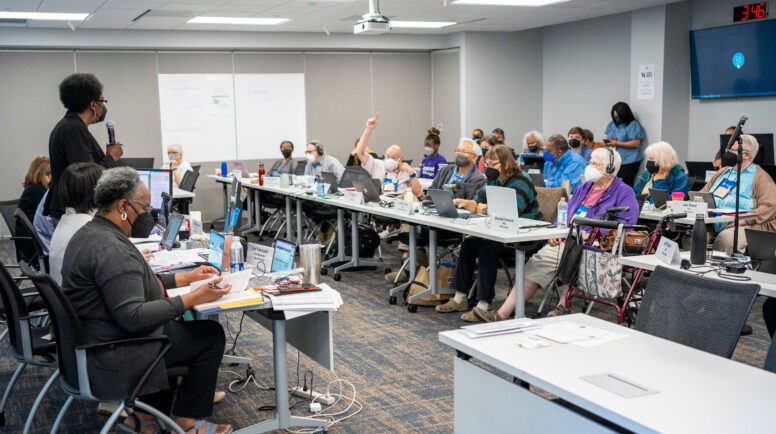 Louisville, Kentucky — From June 23-25, the Race and Gender Justice Committee of the 225th General Assembly considered 11 resolutions seeking to repair harms done by the church based on race, ethnicity, gender and sexuality. All resolutions were passed: two as submitted, eight with amendments, and one with comment.

“The time is always right to do what is right,” Barbara Edmonds, resolution advocate and ruling elder commissioner from Presbytery of New York City, quoted Martin Luther King, Jr, in a presentation of RGJ-08: “On Offering an Apology to African Americans for the Sin of Slavery and Its Legacy” on June 23.

The resolution unanimously passed as amended despite recognition raised that an apology for slavery had been issued by the 213th General Assembly in 2001. Christian Brooks, Associate for Domestic Issues in the Office of Public Witness in Washington, D.C. (OPW), confirmed that while that previous apology was made, it did not go as far as the current proposal and had not included the ways the legacy of slavery still affects Black people in this country.

Although specific issues considered by the Race and Gender Justice Committee (RGJ) of this 225th General Assembly spanned the experience of oppression over generations and amidst diverse communities, the need to apologize and to become what committee moderator Willye Bryan from Lake Michigan Presbytery, called “repairers of the breach” set the foundation for each resolution and report received.

“Maybe it’s the Calvinist in me speaking,” said Mark Douglas, member of the Advisory Committee on Social Witness Policy (ACSWAP) and advocate for RGJ-10: “Resolution on Race, Reparative Justice, and the PCUSA,” remarking on the core of all the resolutions before the committee, “but the pursuit of repair, always at the heart of the gospel, has met a special providential moment at this General Assembly.”

Douglas suggested the new Center for Repair of Historic Harms within the Presbyterian Mission Agency (PMA) should be tasked with coordinating the efforts of reparations as the resolutions set before the committee and the further exploration requested by the committee suggest this work needs “long-term care and commitment.” The committee considered overlaps between RGJ-10 and RGJ-12: “Report of the Special Committee on Racism Truth and Reconciliation” and made amendments to both reports for coherence.

Speaking to RGJ-08, Eliana Maxim from the Committee on the Office of the General Assembly and valerie izumi, from the Office of the General Assembly and staff person for the Special Committee on Racism Truth and Reconciliation (SCRTR), asked the committee to consider the difficulties in an apology for the sin of slavery being issued by our current stated clerk, J. Herbert Nelson, II, as a Black man, or by SCRTR, which is slated to be dismissed at the end of the 225th General Assembly.

The committee deliberated on Thursday and into Friday concerning two of the six directives with financial implications of RGJ-07: “A Resolution Addressing the Lack of Installed Pastoral Leadership in People of Color Congregations in the PC(USA)” in terms of the feasibility, polity and legality of insuring minimum compensations and jubilee-inspired debt relief for congregations in which 80% or more of the members identify as persons of color.

E. Byron Elam, representative from the General Assembly Committee on Representation (GACOR), responded to concerns about the sources of financial support and the possible burden it would place on congregations, mid councils or grant-giving organizations with this comment: “This is a crisis and we need to treat it as the crisis it is … We encourage the General Assembly to overcome the obstacles cited … We need to come up with solutions that are specific and measurable.”

RGJ-07 ultimately passed with amendments that require tracking comparisons of compensation between White congregations and those of color and by specifying the role of The Center for the Repair of Historic Harms as a grant-giving entity in the further work of reparation.

RGJ-09 held the largest financial implications considered by the committee when it listened to the decades-long trauma and hurt of Tlinget members in Alaska during the presentation the resolution “On Directing the Office of the General Assembly to Issue Apologies and Reparations for the Racist Closure of the Memorial Presbyterian Church, Juneau, Alaska.”

Advocate and former member of Memorial Presbyterian Church, Maxine Reichert, introduced a two-minute video about the history of the thriving multicultural and bilingual ministry of the congregation and explained the church was started, thrived and “was forcibly closed during a time when racism towards natives in Alaska was ‘blatant’ with signs posted outside public businesses, ‘no natives, no dogs.’”

Reparations specified in the resolution would be paid to the Presbyterian Foundation’s Native American Church Property Fund and to the Sealaska Heritage Institute for Indigenous language revitalization.

“I think the White church has as much at stake as the Native church does in this overture,” said resolution advocate Phil Campbell, former pastor of Kuneix Hidi Northern Light United Church, who cited the historic doctrine of repentance as the path to healing: “It’s the opportunity to live into the fullness of the faith, really for the first time.”

The decades of unacknowledged trauma and suffering ignored by the Presbyterian Church (U.S.A.) and the years dedicated to uncovering these wounds, researching their effects and discerning a way forward was a repeated theme throughout the presentations. Madison McKinney, co-chair of the Advocacy Committee for Women’s Concerns, spoke about the research and people involved behind RGJ-02: “A Resolution on Missing and Murdered Indigenous Women, Girls, and Two Spirit People” (MMIWG2S), which she helped to propose through ACWC and the Racial Equity Advocacy Committee (REAC).

“We must use our resources to find a different way for Indigenous women,” she said. “Not just to honor who we are, but to support the people who are still here who are trying not to be erased.”

On Thursday afternoon, RGJ-02 unanimously passed in a 33/0 vote. Further testimony to gendered and sexuality-targeted violence followed. In a 30/3 vote, the committee approved RGJ-04: “A Resolution for Transwomen of Color” proposed jointly again by ACWC and REAC. REAC member, Shanea Leonard, associate for Gender and Racial Justice for the PMA, clarified over Zoom the reasons the resolution only addressed the murders of transgender persons during 2020-21 saying, “the last two years were the deadliest years on record which speaks to the problem getting worse.” The resolution carries $2,500 in financial implications.

Despite the heavy topics, the committee kept pace with its agenda, completing its work early on both Friday and Saturday, allowing for time to process the discussions. Several members and guests including a Young Adult Volunteer (YAV) from the rural Midwest, confessed both their privilege and their new awareness of racism and violence within our history as a country and as a denomination, while others expressed feeling prepared for the work but still deeply impacted by the stories of intergenerational trauma when untold histories come to light. “I am especially grateful for the grace and patience you have shown,” said Bryan in a time she called open mic night. “I will always appreciate this time we shared.”

The committee considered a commissioner’s resolution brought forward, in part, by committee vice moderator Lori Yamauchi from San Francisco Presbytery. RGJ-14: “On Violence and Hate Against Asian American and Pacific Islanders” proposes to raise awareness within the PC(USA) of its complicity in perpetuating racism towards the “model minority” of Asian American, Native Hawaiian and Pacific Islanders that lead to perspectives resulting in “the unequal, unjust, and ungodly treatment and murders of racialized minorities including AA, NH, PI communities.”

Early in the afternoon on June 24, Yamauchi took a moment to acknowledge the breaking news of the U.S. Supreme Court’s decision to overturn Roe v. Wade and the heightened feelings committee members might be processing while deliberating over resolutions regarding race and gender justice.

The first decision the committee made together the day before was, in fact, RGJ-03: “A Resolution on Reproductive Justice: Black Maternal / Birthing People and Infant Mortality” co-sponsored by REAC and ACWC. The committee approved the resolution by a vote of 31/1 with the following comment: “Racism is now being acknowledged as a public health crisis. It is also a reproductive issue. The numbers and disparity between People of Color / Black birthing people and White birthing people in the United States have and continue to experience violations of bodily autonomy.”

On June 25, the committee also approved RGJ-11: “A Resolution on Racism as a Public Health Crisis” and RGJ-13: “Report from the Disparities Experienced by Black Women and Girls Task Force.” RGI-13 carries a financial implication of $284,350. 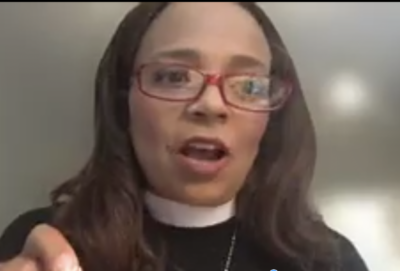 In response to a question about recognizing steps the denomination has taken versus how far we still have to go, specifically in the work of justice for Black women and girls, Kerri Allen, moderator of the Advocating for Black Women and Girls Task Force, said, “Let us not break our arms patting ourselves on the back.” She referred to a church doctrine that had been weaving itself through the three days of deliberation alongside the call to repentance: “As John Calvin said, ‘Sanctification is an ongoing and regenerative process. We don’t arrive at this side of the Jordan at perfection.’”

These approved items from the Race and Gender Justice committee will be considered during the July 5-9, 2022, plenary sessions of General Assembly 225. Stay tuned to the outlook for full coverage of the assembly’s actions. 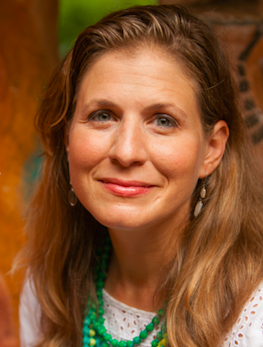 Beth Waltemath is a writer, a writing coach and co-pastor of North Decatur Presbyterian Church.
For more about Beth, go to https://bethwaltemath.com.