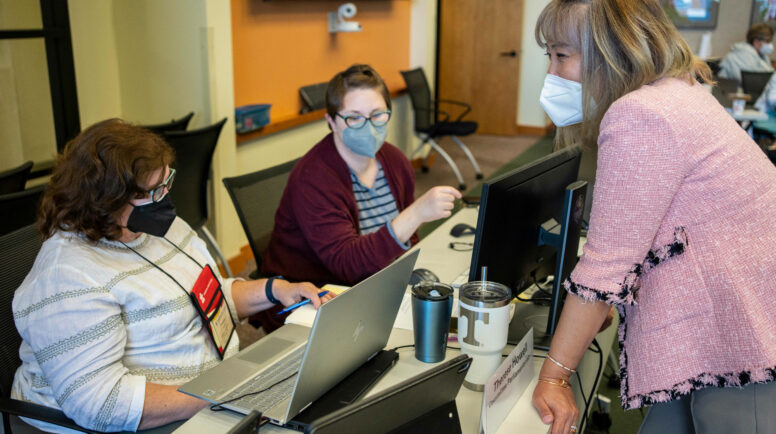 Louisville, Kentucky – The Ecumenical and Interfaith Engagement Committee of the 225th General Assembly today recommended that the assembly receive a study document denouncing antisemitism and Islamophobia and distribute it throughout the Presbyterian Church (U.S.A.) for “study and reflection.” The vote was 25-2.

The study document – which is not PC(USA) policy – “is designed as a practical guide to repairing our relationships with Jews and Muslims,” said Whitney Wilkinson Arreche, a member of the denomination’s Committee on Ecumenical and Interfaith Relations (CEIR).

“We address antisemitism and Islamophobia in a single document,” Wilkinson Arreche continued, “because of our singular commitment to repent of and make repair for harm we have caused both communities.”

The study document builds on the “Interreligious Stance” adopted by the 2014 General Assembly, which states that “many things draw us together in respect for those who have religious commitments different from our own, including the example and person of Jesus Christ, the evident need for religious peace, the necessity of meeting human needs in a world of poverty or want, and the biblical call to solidarity amid our diversity.”

Antisemitism “exists on multiple levels,” the study document states, “ranging from consistent, low-level aggression and negative stereotyping, to significant acts of violence against Jews, their religious communities, and their property.” All of these forms of antisemitism are on the rise, the document asserts, fueled in part by White supremacy. “Addressing the long history of antisemitism, and our current complicity in it,” the document continues, “requires study, confession and repentance.”

The document includes two definitions of antisemitism – from the 2021 “Jerusalem Declaration on Antisemitism” developed by a group of scholars in Jewish, Holocaust, Israel, Palestine and Middle East studies; and from the Anti-Defamation League.

Wilkinson Arreche insisted that “we can support Palestinian self-determination, criticize the State of Israel’s human rights abuses against the Palestinian people, and repent of our own antisemitism. These are not mutually exclusive.”

Turning to Islamophobia, the study document states: “From the Crusades in the Middle Ages to the transatlantic slave trade to European colonialism in the 19th and 20th centuries, Western Christians have a long history of targeting Muslim populations with hostility and violence in the name of empire.”

The sources of Islamophobia are political, theological and ideological, Wilkinson Arreche said. And while Islamophobia “cannot be divorced from the events of 9/11 … much of Islamophobia in the United States in manufactured intentionally for political and financial gain.”

As with antisemitism, the study report includes two definitions of Islamophobia — from the Council on American-Islamic Relations (CAIR) and from the Haas Institute at the University of California at Berkeley.

CAIR notes four ways in which Islamophobia can be identified in organizations and individuals:

The study report concludes with “a practical guide” with four actions PC(USA) individuals, congregations and councils can take to “repair our relationships with Jewish and Muslim people:

“These are just words,” Wilkinson Arreche said. “But we hope they lead to good work.”