Freedwoman statue at the Juneteenth Memorial in Austin, Texas.

It’s the nature of a General Assembly: to decently and in order plow through as much business as possible. It’s exhausting, exhilarating. It’s easy to get lost in the details.

But this year, those planning this assembly are asking Presbyterians – commissioners and others watching from at home – to pause at two particular times to pay attention to history, injustice and race.

One will be on June 19, Juneteenth, which became a federal holiday in 2021. J. Herbert Nelson, stated clerk of the Presbyterian Church (U.S.A.), will preach during a hybrid Juneteenth worship service at 11 a.m. EST, preaching from the sixth chapter of Isaiah, when Isaiah says to the Lord: “Here am I, send me!” 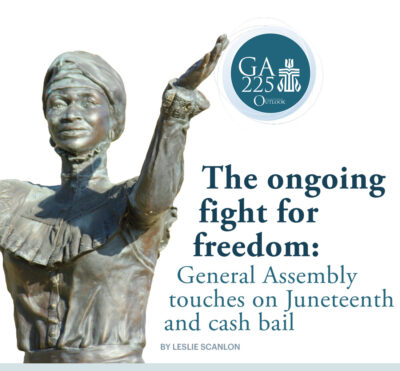 The second will be July 7, when the assembly will take time at 6 p.m. EST for a livestreamed “Hands and Feet” social justice event, with a focus – as it was when the assembly met in St. Louis in 2018 and Presbyterians marched through the downtown streets to deliver donations that would be used to bail out incarcerated people – on ending cash bail, a system in which people who can’t afford to pay bail are kept locked up until they go to court, even if their offense is minor.

In 2021, Illinois became the first state to eliminate cash bail — a practice that some call the “poor people’s tax,” and which criminal justice reform advocates say disproportionately affects low-income people and people of color.

Think of both of those events as opening the door to further discussion by congregations —recognizing that in the current polarized American political environment, issues of race and economic disparity and systemic oppression play a role in public policy debates from the school board to the statehouse, on issues as diverse and incendiary as redistricting and voter registration, critical race theory, reproductive rights, health care and environmental policy, policing and affordable housing.

Here’s a closer look at some of those conversations coming to this assembly — which will be a hybrid assembly held from June 18 to July 9, with committee meetings taking place on a staggered schedule in renovated space at the denomination’s national office building in Louisville, and with plenary sessions online.

Juneteenth.  How long does it take good news to travel? In the case of the Emancipation Proclamation, which President Abraham Lincoln issued on January 1, 1863, declaring that enslaved people were free, it took more than two years for word of that to make its way to parts of Texas. On June 19, 1865, the good news of liberation finally made its way to the port city of Galveston, when Major General Gordon Granger landed with Union troops and announced that the Civil War had ended following General Robert E. Lee’s surrender at Appomattox, and that enslaved Black people were free.

Records indicate that as early as 1866, there were community celebrations in Texas marking this historic date, often including prayer services at churches. Pulitzer Prize-winning author Isabel Wilkerson wrote in The Warmth of Other Suns: The Epic Story of America’s Great Migration that as Black people moved North and West, “the people from Texas took Juneteenth Day to Los Angeles, Oakland, Seattle, and other places they went.”

Many descendants of enslaved people consider it their Independence Day — a celebration of the strength and resilience of their people and of African American culture through food, music, family, and faith.

Like much of history, however, the Juneteenth commemoration is more complicated. When Granger read the proclamation in Galveston in 1865, there was no immediate liberation and certainly no end to systemic discrimination. Some White plantation owners waited until the harvest was over to share the news, writes Director of the Hutchins Center for African and African American Research at Harvard University Henry Louis Gates Jr.

Lynchings continued. Without property or a source of income, many Blacks became sharecroppers. Jim Crow and “Whites Only” quickly followed Reconstruction. In 2020, America was reminded of the White Supremacy at the heart of our institutions with the police killings of George Floyd and Breonna Taylor. In 2022, we experience racial disparities in incarceration rates, infant mortality, deaths from COVID-19, school test scores and suspension rates, employment, home ownership and so much more.

“So, is Juneteenth really a cause for celebration?” wrote Shanea D. Leonard, associate for gender and racial justice in the Presbyterian Mission Agency, in 2021 in a Juneteenth Minute for Mission reflection. “Well, yes and no. No, because even in 2021, Black people in America are still dealing with the residuals of chattel slavery in every aspect of their existence and thus in many ways are still not free.  …

“However, yes, we should celebrate Juneteenth as an entire country, for it is a day that marks the official end to the darkest period this country has ever known. It is the chance to shout “hooray,” even if it is fleeting, for one of the few times that Black people were given a piece of what they were entitled to as citizens of this nation. And so, even though we still battle racism, white supremacy, economic disenfranchisement, discrimination in housing, inequity in education, perpetual bigotry, racist policing, unjust laws and a painful past, we still celebrate the hope of a tomorrow where the promise of equity, equality and true liberation are perhaps achievable… or at least closer than they have ever been.”

Cash bail. Beginning with the 2018 General Assembly, PC(USA) leaders have spoken out repeatedly against cash bail —saying the system is unjust and used to keep low-income people in jail, sometimes for months, because they can’t afford to pay bail even when charged with minor offenses.

The Hands and Feet event on July 7 will focus on that issue, including a panel discussion with three participants — Nelson, the stated clerk; Jimmie Hawkins, director of the PC(USA)’s Office of Public Witness in Washington D.C., and Shannon Craigo-Snell, a professor of theology at Louisville Presbyterian Theological Seminary. The presentation also will include videos updating Presbyterians on what’s happened in St. Louis regarding cash bail since the 2018 assembly, and examples of work being done in some other communities.

Early on, there had been talk of the possibility of some sort of public witness connected with cash bail, at least for commissioners who will be in Louisville at that time attending committee meetings.

In recent months, however, the subject of cash bail has become hotter and more controversial than ever in Kentucky.

In March, the Kentucky House of Representatives passed a bill that would have limited the ability of charitable organizations in the state to bail people out of jail. That bill would have prevented charitable groups from posting bonds greater than $5,000 or for cases involving domestic violence. Ultimately, the bill passed the House but was not taken up in the Senate, so didn’t become law. An earlier version of House Bill 313 would have prohibited charitable groups from posting bail in Kentucky at all.

The issue gained traction among Republican lawmakers in part because of two high-profile local cases. In one, the nonprofit group Bail Project paid a $5,000 bond to bail out Michael DeWitt in February 2021, after he had been charged with public intoxication from controlled substances, receiving a stolen vehicle, resisting arrest and assaulting a police officer. Five days after his release, DeWitt allegedly stole a truck at gun point and, while under the influence, ran head-on into a car driven by Madelynn Troutt, a 17-year-old high school senior and cheerleader at Butler High School. Troutt died, and DeWitt has been charged with her murder.

In March 2022, Troutt’s parents filed a lawsuit stating that the Bail Project did not reasonably investigate DeWitt’s “extensive criminal history and propensity to reoffend” before posting his bail in 2021.

Another charitable group, The Louisville Community Bail Fund, which is affiliated with Black Lives Matter Louisville, also faced criticism this year after posting a $100,000 bond that allowed activist Quintez Brown to be released to home incarceration. Brown was charged with the attempted murder of Craig Greenberg, a Democratic candidate for mayor of Louisville, after Brown allegedly went to Greenberg’s campaign headquarters on Valentine’s Day and fired a Glock handgun at the candidate, missing Greenburg but grazing the sweater he was wearing.

Brown, a 22-year-old former University of Louisville student, is an activist who was involved in public protests after the police killings of Floyd and Taylor in 2020. After his release on bail, Brown was taken for a mental health evaluation.

In April, Brown was indicted on federal charges related to the shooting, and a federal judge has ordered that he remain in jail until his trial.

The Bail Project, the organization which posted the bond for Michael DeWitt, the man accused of murdering Madelynn Troutt, has connections to the PC(USA). In June 2019, they partnered together to hold a rally in downtown Louisville where Nelson and PC(USA) employees marched  to the rally from the steps of the denomination’s office building, declaring cash bail to be unjust. Hawkins, from the Office of Public Witness, prayed “that the prison doors and the jail doors may be thrown open.”

Earlier this year, both Nelson and John Odom, general presbyter of Mid-Kentucky Presbytery, were among a group of interfaith leaders who signed a public statement opposing House Bill 313.

Shameka Parrish-Wright, operations manager for the Bail Project, is one of eight candidates running in the Democratic primary this year for election as mayor of Louisville.

The assembly itself also will be asked to vote on two measures involving cash bail.

A recommendation from the Advisory Committee on Social Witness Policy asks the assembly to “affirm continuing efforts to end the discriminatory effects of the cash bail and ‘fines and fees’ system in keeping the poor, especially persons of color, economically insecure, and to advocate reforms of policing and sentencing systems.”

And a recommendation from the Disparities Experienced by Black Women and Girls Task Force asks the assembly to support legislative efforts to end cash bail.