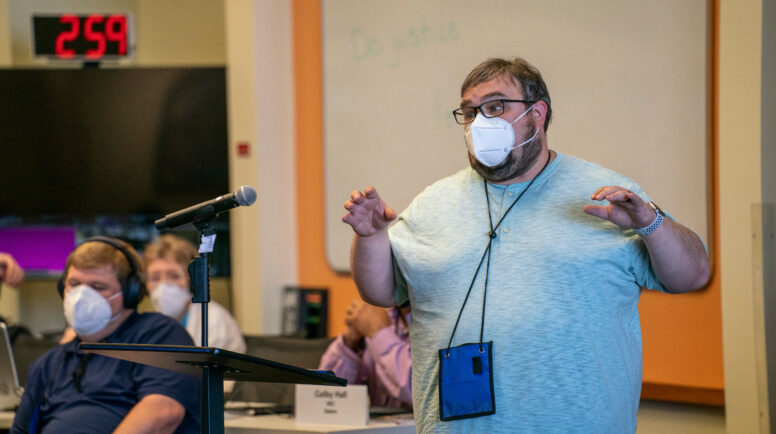 Jason Clapper (TEC-Northumberland) speaks in the Addressing Violence in the USA Committee. Photo by Gregg Brekke for Presbyterian Outlook.

Louisville, Kentucky — The final day of the Violence in the USA Committee opened with worship. Erika Rembert Smith, the committee moderator from Central Florida Presbytery, asked people to stand up and share their blessings. The worship service continued with Jimmie Hawkins, director of the denomination’s Office of Public Witness, offering a prayer of gratitude for the Holy Spirit that brought this group of people from all over the world together to work towards ending gun violence. Vice Moderator Angela Madison closed the opening worship by singing a stunning and soulful a cappella version of the song “Falling in love with Jesus.”

The committee started their work by considering VIOL-09: On Commending and Recommending the Guns to Gardens Movement. This resolution recommends to the churches and presbyteries of the Presbyterian Church (U.S.A.) that they learn about the Guns to Gardens project which proposes a gun buyback program for unwanted firearms. It encourages churches to prayerfully consider if it is a ministry to which they are called as part of the larger PC(USA) witness to prevent gun violence, save lives and provide healing for a nation traumatized by violence. The resolution also urges the Presbyterian Peacemaking Program to add information about Guns to Gardens to its website of Gun Violence Prevention Resources and encourages the Peacemaking Program and other communications and mission entities of the PC(USA) to join in commending the congregations, presbyteries, and synods that participate in the Guns to Gardens movement.

The commissioners heard video testimony from the overture advocates who shared about the gun buyback programs run by their churches. The guns are dismantled and formed into garden tools, taking inspiration from Isaiah 4:2 when the prophet exhorts God’s followers to beat their swords into plowshares. The committee broke into small groups for discussion and then returned to their deliberations, reporting back from their small groups. The resolution passed without amendments.

The committee took up their final resolution, VIOL-08: On Living in Healthy Relationships Free of Violence and Coercion. This overture calls on the 225th General Assembly to endorse the National Resource Center on Domestic Violence and Firearms’ gun relinquishment protocol, educate congregations about this issue and make them aware of the resources available through the Presbyterians Against Domestic Violence Network, and encourage church members to advocate in their presbyteries for removal of guns from domestic abusers. The committee heard from the overture advocate Charissa Howe, a prison chaplain from Pittsburgh Presbytery who shared her own experience of domestic violence and discussed her work with victims and offenders in her current role.

After some discussion, the resolution was amended to include a fourth point which encourages local churches or presbyteries to advocate and collaborate with court systems, law

enforcement officials and local domestic violence programs to ensure that weapon removal protocols are established and enforced. The amended resolution was passed unanimously and sent to the General Assembly.

The committee concluded with the moderator thanking the committee for their work, their desire to seek the will of God through the work of the committee and listening to one another, and for their amazing grace. The committee had an in-person visit from J. Herbert Nelson, the stated clerk of the Presbyterian Church (U.S.A). He lauded the committee for their good work, time and effort in this hybrid meeting format, celebrating the use of technology that allows for flexibility and contextual change. They closed with a worship service that included communion, song and prayer.