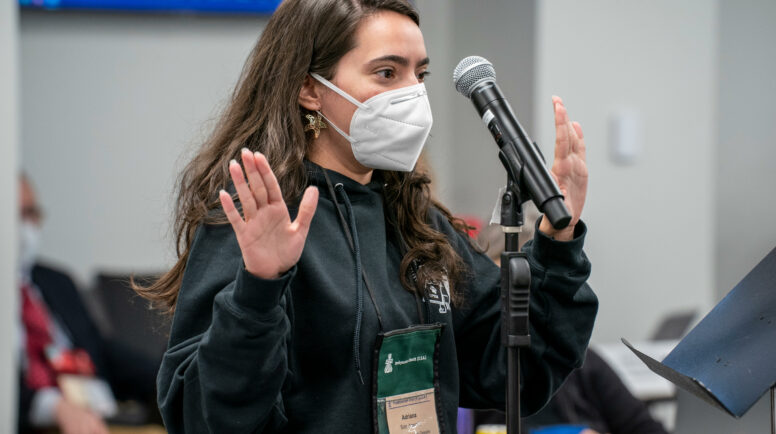 Louisville, Kentucky – The Moving Forward/Vision 2020 Committee today approved five actions (MOV-02) recommended to it by the Moving Forward Implementation Special Committee (MFISC) that will realign several functions within the national structure of the Presbyterian Church (U.S.A.) and make permanent two “tables” designed to enhance communication, cooperation and collaboration among a number of national agencies of the denomination.

A recommendation that a “Trust and Transparency” document developed by the Way Forward Commission (a predecessor commission to the Moving Forward groups) be added as an appendix to the Manual of the General Assembly was referred after committee members were informed that it “directly conflicts with the Assembly’s Open Meeting Policy.” The committee sent the recommendation to the Office of the General Assembly (OGA), as the stated clerk is the official interpreter of the longstanding Open Meeting Policy.

The Office of the Stated Clerk was asked to reconcile the two documents before any further action is taken on the “Trust and Transparency” document, which OGA constitutional authority Laurie Griffith described as “much more restrictive” than the Open Meeting Policy.

Two other recommendations were held over until Saturday’s committee session.

MFISC co-chair Deb Avery of Great Rivers Presbytery said the special committee’s goal was to “help GA create a structure that will support the church we all love at all levels, building on work that has gone on before.” She said the special committee hopes its work will provide “a unified vision; streamlined and sustainable models for coordination, collaboration and cooperation; support for mid-councils; deepened global mission; and support for the ministries of congregations of all sizes.”

Avery’s co-chair, Eric Beene of Redwoods Presbytery added that a long-held desire of the MFISC is for a unified Presbyterian Mission Agency-Office of the General Assembly budget. “We know that a coordinating table goal is a unified budget for sharing of resources and the elimination of ‘silo-ing’ between agencies and departments.”

Currently, each General Assembly adopts two budgets: the General Assembly Mission Budget and the Per Capita Budget. OGA is entirely dependent upon per capita funds while numerous sources fund the mission budget.

The two-budget system is not working, said Laura Cheifetz of Middle Tennessee Presbytery and chair of the Assembly’s Special Committee on Per Capita and Financial Sustainability. “We found there is extreme imbalance in the funding of various agencies. OGA and PMA funding is inequitable,” she said. And because people out in the church “don’t understand our structure and thus our funding models,” Cheifetz said, her committee is recommending (to a different Assembly committee) that OGA and PMA be merged into a single agency.

In other actions Friday, the committee approved enabling recommendations designed to distribute the Guiding Statement from the Vision 2020 Team approved Thursday as widely throughout the church as possible. The committee also recommended creation of an Implementation Team “to introduce this Guiding Statement and to integrate it into the life of the denomination.” And the committee approved a recommendation that the 228th General Assembly (2028) consider forming a Vision 2030 Team to further the denomination’s visioning efforts.