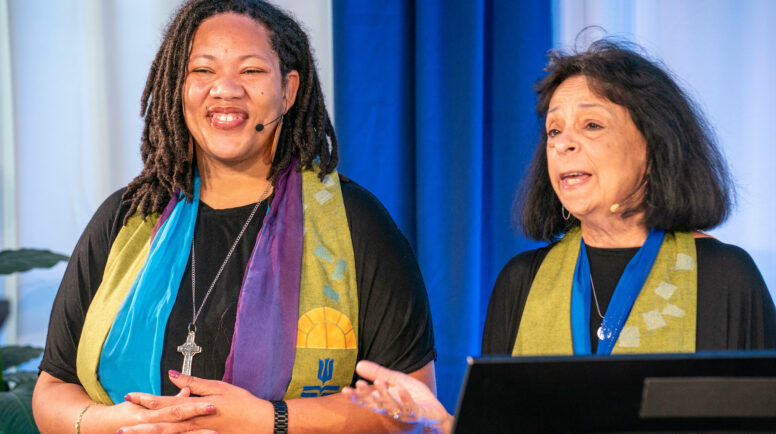 Co-Moderators of the 225th General Assembly of the PC(USA) Shavon Starling-Louis (left) and Ruth Santana-Grace in the assembly plenary broadcast center in Louisville, KY. Photo by Gregg Brekke for Presbyterian Outlook.

The referred item (MC-11) sought to include memorializing non-ordained members of the church during the necrology report of deceased ministers and ruling elders that is presented to each Assembly. “This is a very complicated process of gathering all of those names efficiently and effectively,” Guekguezian said. The motion to refer the item to the Committee on the Office General Assembly passed 361-31. Other items from the Mid Councils Committee also received lopsided votes.

By a vote of 306-96, the Assembly voted to authorize a task force “to explore the theology and practice of ordination, including commissioned ruling elders, as well as membership, church structure, accountability, and chartering.” In doing so, the Assembly expanded the scope of the task force, which was sought in an overture from San Fernando Presbytery.

The presbytery had proposed a study only of ruling elders, but Richard Poole of San Fernando Presbytery argued for the more expansive charge to the task force, saying, “As our world changes our understanding of the church must change, too.” The growth of new worshiping communities in our denomination has created an ‘intersectionality’ of ministry that extends beyond just ruling elders.” The proposal (MC-10 as amended) passed 306-96.

By a vote of 385-13, the Assembly voted to send a constitutional amendment (to G-3.0401) to the presbyteries that gives more leeway to synods to enroll as members persons who are serving as elected members of synod entities to more completely “fulfill the principles of participation and representation” outlined in The Book of Order. The Assembly utilized language proposed by the Advisory Committee on the Constitution for the final wording of its action (MC-06).

In other actions brought by the Mid Councils Committee, the Assembly:

The Tuesday afternoon plenary began with prayer and a video presentation from the Board of Pensions entitled “Strength and Stability to Serve a Changing Church.” The plenary took up, but did not complete before the dinner break, discussion on the agenda presented by the Polity Committee. Stay tuned to the Presbyterian Outlook for full coverage of this and all the plenaries of General Assembly 225.