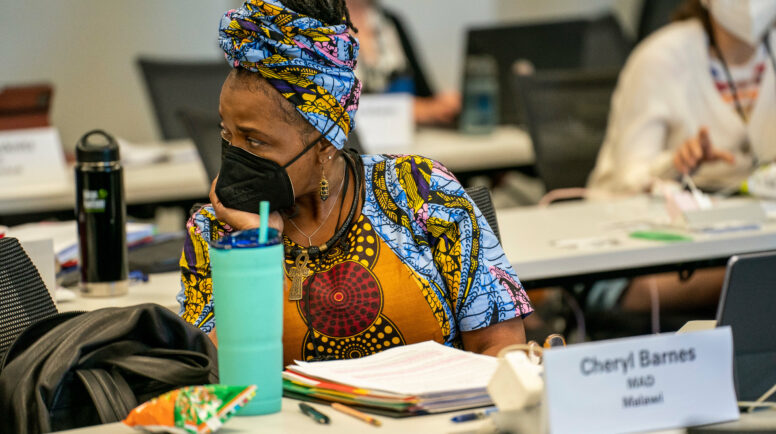 The Race and Gender Justice Committee at the Presbyterian General Assembly 225 (2022) in Louisville, Kentucky. Photo by Gregg Brekke for Presbyterian Outlook.

Louisville, Kentucky – Wednesday morning’s preacher was Kate Murphy, pastor of the Grove Church in Charlotte, North Carolina, who said we are like Saul on the road to Damascus, “claiming to do the will of God but resistant to what God demands.” As Presbyterians, she continued, “We can’t just claim our achievements and contributions, but also the harm and destruction new have wrought. We are called to lay it all down and leave it behind” and through repentance and God’s grace “to be reborn by the power of the Holy Spirit to become something new altogether … transformed from who we were to who we were called to be.”

The assembly then turned to the work of denominational transformation as it tacked 11 recommendations from its Racial and Gender Justice Committee (RGJ), addressing in Plenary 7 – as Outlook reporter Beth Waltemath wrote in her summary of the committee’s work – “the theological and practical implications of repentance and reparation … concerning historic harms committed against and by churches and communities due to racism and gender-based discrimination.”

Both were approved today with overwhelming majorities.

Speaking to RGJ-02 (“A Resolution on Missing and Murdered Indigenous Women, Girls and Two Spirit People”), Madison McKinney, co-chair of the Advocacy Committee for Women’s Concerns, said: “Colonial violence against Indigenous peoples is a repudiation of God’s good creation of nations and individuals.”

On RGJ-13 (“Report from the Disparities Experienced by Black Women and Girls Task Force”), Task Force Moderator Kerry Allen said, “We stand at a crossroads as this nation is divided over race and gender issues which adversely affect Black women and girls … and society’s inability to recognize Black women and girls as creations of God.” Anwi Fomukong, a young adult advisory delegate from Santa Fe Presbytery, added, “I’ve been blessed because my parents sought out opportunities. All of us should have the same opportunities.”

Chris Heseta, a commissioner from Central Florida Presbytery, spoke to RGJ-14, a resolution denouncing violence against Asian Americans and Pacific Islanders (AAPI). “Every AAPI incident should be denounced, even as we denounce violence against other marginalized people,” he said. “Our response has been very quiet — we must not minimize the hate and violence directed against AAPI people.”

Turning to racialized health disparities, the assembly approved RGJ-03 — which addresses reproductive justice for Black mothers and birthing people. The resolution includes the comment: “Racism is now being acknowledged as a public health crisis. It is also a reproductive issue…” Vice Moderator of the RGJ Committee Lori Yamauchi of San Francisco Presbytery said the lack of reproductive justice “has devastating effects on marginalized communities.” She cited the disproportionate mortality rates for infants and birthing people between birthers of color and White birthers.

On the matter of reparative justice, Bryan said, “The roots [of racism in the U.S.] are slavery and land theft from Indigenous Americans.” The assembly adopted three “overlapping” items that Bryan said, “begin to address all the atrocities in our history.” The three are RGJ-07, RGJ-10 and RGJ-12.

RGJ-07, which was pulled from the consent agenda and approved 358-21, calls for additional support for people of color congregations, 80% of which do not have installed pastors.

RGJ-10, from the Advisory Committee on Social Witness Policy (ACSWP), calls for 11 specific actions to address racism and reparative justice in the PC(USA). Mark Douglas, an ACSWP member and professor at Columbia Theological Seminary, had told the committee earlier that “the pursuit of repair, always at the heart of the gospel, has met a special providential moment at this General Assembly.”

RCG-12, from the Special Committee on Racism Truth and Reconciliation, calls for a new seven-member special committee to continue the work “to explore and expose where White supremacy is embedded institutionally and foundationally in the Presbyterian Church (U.S.A.) and its governing documents and make recommendations.” The proposal also calls for all councils to develop anti-racism policies, for the Presbyterian Historical Society to develop “an online historical self-study tool for congregations and mid councils to investigate their own history,” additional support for the denomination’s Self-Development of People Committee, and several other reparative actions.

The assembly approved RGJ-09, which calls for apologies and reparations for Alaska Natives due to “the racist closure of Memorial Presbyterian Church, a mixed Tlingit/non-native congregation in Juneau.” The congregation was dissolved in 1963, a move that nearly all agree was a direct result of the PC(USA)’s institutional racism. Maxine Richert, an Alaska Native and former member of Memorial Church who served as an overture advocate for the proposal, from Northwest Coast Presbytery, said “three generations still mourn and are outraged by the closure.”

And the assembly, acting on RGJ-08 — which was also pulled from the consent agenda. The item, in the form of an overture from Giddings-Lovejoy Presbytery, calls for an apology to African Americans “for the sin of slavery and its legacy. The 213th General Assembly (2001) issued a similar apology. Commissioner Robert Morgan of Savannah Presbytery said he pulled the item from the consent agenda “because this issue is too important to treat perfunctorily. It’s important to apologize,” he said, “but it’s just as important to renounce the sin that hangs over us.”

The item also calls for the development of curricula about slavery and its legacy — for children, youth, and adults to foster repentance that leads to metanoia (“a transformative change of heart”). Tony De La Rosa, executive for the Synod of Mid-America, announced to the assembly that the synod will cover the $4,500 cost to produce the curriculum.