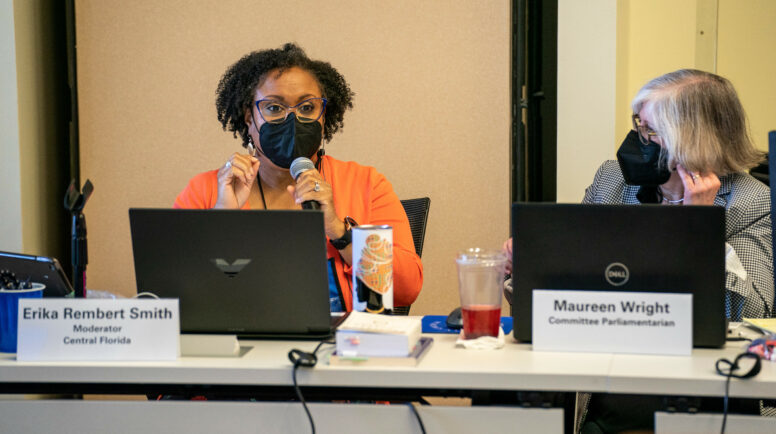 Erika Rembert Smith, moderator of the Addressing Violence in the USA Committee. Photo by Gregg Brekke for Presbyterian Outlook.

Louisville, Kentucky — As the ninth plenary of the 225th General Assembly of the Presbyterian Church (U.S.A.) began on Wednesday evening, the commissioners and advisory delegates found themselves roughly one report behind the projected plenary schedule. The evening plenary was scheduled to begin with the conclusion of the report of the Addressing Violence in the USA Committee. However, the assembly adjourned for its evening meal break with one vote remaining from the afternoon report of the Environmental Justice Committee.

The one remaining item from the Environmental Justice Committee was efficiently approved following the break. Moderator of the Bills and Overtures Committee Cristi Scott Ligon moved that the speaker time in debate for the evening session be limited to 1:30 minutes, and the vote received the necessary ⅔ approval. In addition, Scott Ligon moved that the report of the Health, Safety, and Benefits Committee be moved to the end of Plenary 10 on Thursday morning, to which the assembly also agreed.

The number of items of business for the Addressing Violence in the USA Committee was substantial with only three of its nine items of business on the consent agenda. However, two of the remaining seven items were to be answered by item VIOL-07.

The committee report began with Committee Moderator Erika Rembert Smith introducing VIOL-06 reaffirming the Lift Every Voice document passed by the 218th General Assembly in 2008 and updated by the 222nd General Assembly in 2016. Rembert Smith discussed the committee’s amendment to the recommendation which is “in the spirit of countering polarization.” The principal effect of the changes removed references to specific elections and protests and make it applicable to all.

With one comment in support and no comments in opposition to the item, commissioners quickly approved the item 370-15.

The next three items were VIOL-01, VIOL-05 and VIOL-07. As Rembert Smith explained, VIOL-07 as recommended by the committee is an alternate resolution based on the original item of business but incorporates parts of the VIOL-01 and VIOL-05. This reflects the work of the Advisory Committee on Social Witness Policy (ACSWP), and Rembert Smith explained the advisory committee had considered VIOL-01 and VIOL-05 in assembling VIOL-07. Sue Trigger from ACSWP was recognized to discuss the report and statistics related to the increase in U.S. gun violence over the last few decades. She showed a number of graphs and diagrams documenting the changes over time including one graph showing the frequency of God-related language used in the American Rifleman, the official journal of the National Rifle Association. Among the analyzed phrases she emphasized the increase in the talk of gun ownership as a “God-given right” beginning in about 2000.

It was moved to amend the item by removing recommendation #3 about “Hands and Feet-style learning opportunities.” The reference to the Hands and Feet program was opposed by the Committee on the Office of the General Assembly (COGA) because those programs are developed in association with local entities. As COGA Moderator Stephanie Anthony explained, Hands and Feet events are developed with local entities, and COGA doesn’t want to have a specific agenda from the denomination named for such events. It was pointed out by a commissioner the language used was referencing events in the style of Hands and Feet, but commissioners agreed with the motion and the amendment to remove the recommendation was resoundingly approved.

Two additional amendments were approved including one to have the church call on elected officials to “pass meaningful legislation that protects individual rights as well as provides for the common good and public safety.”

The amended recommendation was overwhelmingly recommended by the advisory delegates and approved by the commissioners 367-19.

The assembly quickly agreed to have VIOL-01 and VIOL-05 answered by VIOL-07. As part of the discussion on VIOL-05, Zoë Goode, a young adult advisory delegate from the Presbytery of Cincinnati, made emotional comments about the increase in mass shootings and the number that have occurred in schools like those she attended. Other advisory delegates and commissioners referenced her comment throughout the rest of the session. In response to Goode’s comments, co-Moderator Shavon Starling-Louis offered a prayer for those affected by gun violence and the work of the committee and church in this area.

The assembly then took up VIOL-11, a commissioner’s resolution “On Directing [Mission Responsibility Through Investment (MRTI)] to Place Gun-Related Companies on the Divestment List.” In the committee, the resolution was amended to specifically name the three companies – Walmart, Dick’s Sporting Goods and Kroger, the only three publicly traded companies in which the PC(USA) has investments that sell firearms and ammunition. Gusti Linnea Newquist, one of the commissioners proposing the resolution, spoke about the rationale and their motivation for putting it forward.

Other commissioners expressed concerns about directing MRTI to take actions when it already has a detailed process in place. Tom Taylor, president and CEO of the Presbyterian Foundation, said 208 companies involved with weapons production – about 15% of the total restricted companies – are excluded from denominational investment. He affirmed the Foundation takes the list seriously and follows the guidance from MRTI.

The item was amended to add a directive for ACSWP to study the impact of various gun company investment policy proposals, including expanding the prohibition on investment to all companies that sell and manufacture guns beyond the current list of those involved with “assault-type” weapons, and VIOL-11 was approved 253-107.

The final item of the session was VIOL-08: “On Living in Healthy Relationships Free of Violence and Coercion.” This recommendation concerned domestic violence and included a linkage to gun violence. It asks the assembly to endorse the National Resource Center on Domestic Violence and Firearms’ gun relinquishment protocol, educate congregations about this issue, make congregations aware of the resources available through the Presbyterians Against Domestic Violence Network, and encourage church members to advocate in their presbyteries for removal of guns from domestic abusers.

An amendment encouraging the church to minister to incarcerated persons and their families and to identify or develop resources to help with this ministry was approved. Additional amendments were offered but were not successful, including one requiring domestic violence training as part of the list of required training in the constitution. Forrest Claassen, Moderator of the Advisory Committee on the Constitution, advised commissioners and delegates this item was not an appropriate place to propose a change to the Book of Order.

And probably the most unexpected amendment offered in the plenary was one encouraging members of the PC(USA) to join the National Rifle Association to effect organizational change “from the inside out”, moved by Bruce McBurney, a commissioner from Wyoming Presbytery. While another commissioner complimented his out-of-the-box thinking, comments in the debate were clearly against such a strategy and the proposed amendment was overwhelmingly rejected.

Throughout the evening, the co-moderators kept business moving and were attentive to the balance of questions and speeches for and against items. Aware of the hour, they allowed the question to be called on this final item and the assembly easily agreed to close the debate. In the final vote, item VIOL-08 was approved by the assembly 338-12.

The plenary adjourned with prayer around 11:45 p.m. putting in just over three hours of work in this session and having completed all the business related to the Addressing Violence in the USA Committee. The other scheduled report from the Health, Safety, and Benefits Committee is now scheduled for the end of Plenary 10 on Thursday morning. 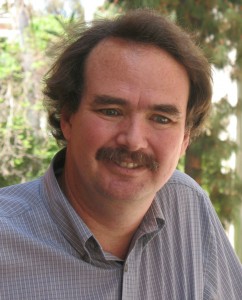