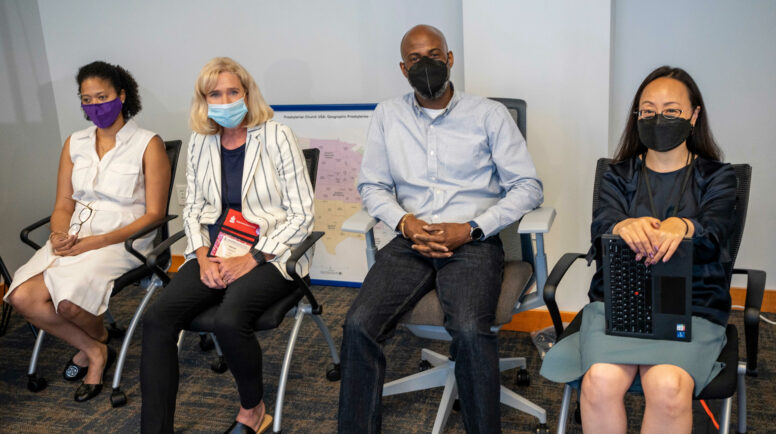 Financial services team ready to present the report on the unified budget at GA225. Photo by Gregg Brekke for Presbyterian Outlook.

The reason for the decrease in 2024: the assembly’s decision to choose Plan Omega as the format for the 2024 General Assembly – with online committee meetings and plenary sessions in-person in Salt Lake City.

Initially, not knowing what format the assembly would choose for 2024, the Office of the General Assembly (OGA) built the most expensive option – a traditional, all in-person assembly in Salt Lake City – into the proposed per capita rate for that year, knowing if the assembly chose a less-expensive option it could lower the recommended amount.  OGA estimates Plan Omega will cost $2.82 million, compared with an estimated cost of $3.65 million for a traditional assembly in 2024.

The $9.85 per member per capita rate the assembly approved for 2023 is 24 cents higher for 2023 than the rate of $9.61 per member which the Committee on the Office of the General Assembly (COGA) and the Presbyterian Mission Agency Board originally recommended coming in to the 2022 General Assembly in June.

The difference reflects the cost of decisions the assembly made which carry per capita financial implications such as creating a task force to explore the theology and practice of ordination to ordered ministry for ruling elders (MC-10) and forming a commission to write a new Presbyterian Church (U.S.A.) confession (TWE-08).

The original per capita recommendation for 2024 had been $10.28 per member, compared with the $9.80 per member the assembly approved.

Coordinated budget. The assembly also approved FIN-14, a unified presentation of budgets for 2023 and 2024 for three entities:

Kerry Rice, deputy stated clerk, told the Financial Resources committee in its July 2 meeting that the per capita budget for the next two years is being balanced in part by pulling $1.3 million from reserves in 2023 and $2.1 million in reserves from 2024.

OGA is required to keep reserves totaling at least 30% of its expense budget in a given year on hand – and by the end of 2024, all reserves beyond that required minimum will be exhausted, Rice said.

That’s a sign of the financial pressure the per capita system is under – part of the reason the Special Committee on Per Capita Based Funding and National Church Financial Sustainability brought a recommendations to create a commission to restructure the national levels of the denomination that the assembly approved in FIN-10.

Laura Cheifetz, co-moderator of the Special Committee, has argued that inequitable distribution of resources is a problem in the denomination – not that the PC(USA) doesn’t have enough money.

“We believe that the system as is is a set-up for scarcity,” Cheifetz told the assembly. “We have a structural problem, an allocations problem, that does not allow us to live into a theology of God’s abundance. We are an incredibly wealthy denomination in all the ways. In money, in people, in theological heritage, in ministry, in mission, in hope, in vision. What we seek is a structure to better reflect our abundance. Simpler. Less confusing, with a clear witness to God’s grace and love.”

As the denomination’s membership continues to decline – down another 51,584 members in 2021 – the only way for OGA to raise more funds now is to increase the General Assembly per capita rate. Many (although not all) presbyteries and synods also assess their own per capita rates.

Rice told the Financial Resources Committee that currently, about 75% of the total per capita charged to congregations goes to support presbyteries and synods, and about 25% to OGA. As an example: Rice said he heard a commissioner in another committee say that the overall per capita in her presbytery was $83. Of that, $8.98 was designated in 2022 for the ecclesial work of the OGA, he said.

OGA is drawing on reserves in 2023 and 2024. To fully balance the budget with per capita alone, the rate would have to exceed $12 per member in 2023 and $13 per member in 2024, said DeAmber Clopton, OGA’s associate director of Finance Administration. After much prayer and discernment, “this felt like a number we could live into,” Clopton said of the per capita rate the assembly approved.