The shape of the story is familiar: in 2021, the Presbyterian Church (U.S.A.) continued to lose members (as it has done for nearly 60 years now), a slow, steady drip of people leaving or dying. According to the just-released 2021 statistical report, the denomination lost another 51,584 members in 2021, bringing the PC(USA) membership down to 1.19 million.

The denomination is mostly-White and aging — a third of Presbyterians are age 71 or older.

Studded in these new statistics, however, are a few nuggets worth examining a bit more closely.

Baptisms were up in 2021 by 3,260 – with 7,511 baptisms “presented by others” reported in 2021, compared with 4,251 in 2020. On the one hand, that’s good news: more baptisms. On the other hand, it probably reflects the impact of the COVID-19 pandemic, when many congregations were closed to in-person worship in 2020 — so parents mostly didn’t have the choice to stand at the front of the church and present their baby to be baptized. Some of those 2020 baptisms likely got delayed until 2021, as COVID-19 vaccinations became available and more churches resumed in-person services.

In 2021, the PC(USA) dissolved 104 congregations — just one more than in 2020. That leaves the denomination with 8,813 congregations. Only two congregations were dismissed in 2021 to other denominations — a significant drop from the early 2010s when hundreds of congregations left for more conservative denominations following General Assembly votes to allow Presbyterian ministers to perform same-sex marriages and to allow gay and lesbian pastors with partners to serve PC(USA) churches.

These days, the decline in congregations is coming mostly as churches get so small that they can’t keep going and dissolve. The number of presbyteries also dropped by four in 2021, from 170 to 166, as some mid councils merged and realigned. 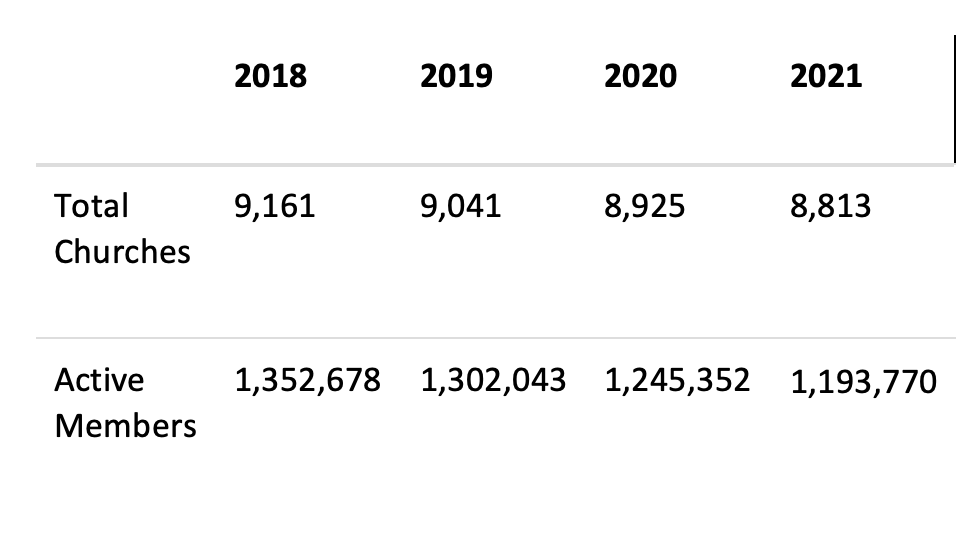 Peak membership came in 1965, with 4.25 million members in the two denominations that later merged to become the PC(USA). The PC(USA) membership losses reflect the reality that fewer American adults participate in organized religion.

In 2020, Americans’ membership in houses of worship dropped below the majority for the first time, according to the Gallup poll, with only 47% of American adults saying they belonged to a church, synagogue or mosque.

Most PC(USA) congregations are small — with 20%, or one in five, having 25 members or fewer.

About two-thirds of PC(USA) congregations have 100 members or fewer.

Financially, that creates real problems for many churches —with increasing numbers being unable to afford to hire a full-time pastor. A number of recommendations coming to the 2022 General Assembly deal with the financial pressure on churches — including recommendations from the Special Committee on Per-Capita Based Funding and National Church Financial Sustainability, and a resolution from the Racial Equity Advocacy Committee (REAC) regarding the lack of installed pastoral leadership in people of color congregations.

The 2021 statistical report also shows a denomination that remains predominantly White — roughly 88%, although that’s not with all congregations reporting.

The full 2021 statistical report can be found here.