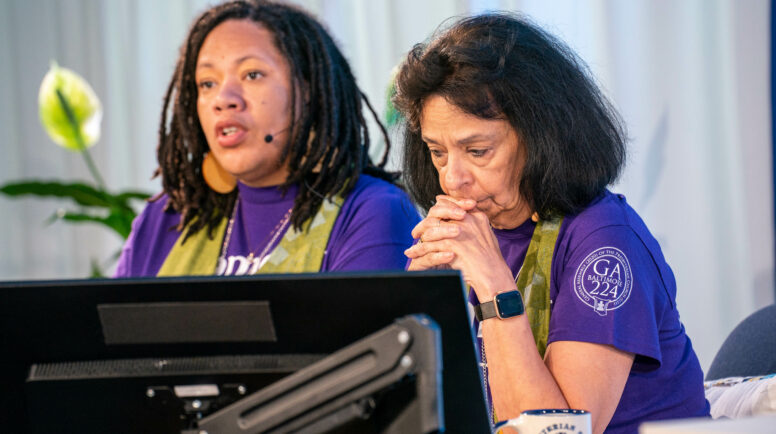 Co-Moderators of the 225th General Assembly of the PC(USA) Shavon Starling-Louis (left) and Ruth Santana-Grace on the fourth day of assembly plenaries. Photo by Gregg Brekke for Presbyterian Outlook.

After finishing discussion and voting on recommendation two of FIN-10, the Assembly heard the remainder of the report from the Committee on Financial Resources, where they named particular items that were passed on the consent agenda including the mission work plan for the Presbyterian Mission Agency (PMA) that includes the Matthew 25 initiative. Corey Schlosser-Hall, deputy executive director of the Presbyterian Mission Agency, described the initiative and shared a video of a Matthew 25 congregation, Mt. Baker Presbyterian Church in Concrete, Washington. Diane Givens Moffett, director of the PMA shared new facets of the Matthew 25 initiative passed through the consent agenda.

Following the PMA report, the Assembly took up the work of the Committee on General Assembly Ministry Coordination. Anne Wilson, ruling elder commissioner from the Presbytery of the New Covenant, was one of the co-moderators of the committee. She began her report by highlighting particular items that were passed via the consent agenda including the women of faith awards in GA-MC-03, and the worshiping communities that received the 2020-21 Sam and Helen R. Walton Awards in GA-MC-14.

Wilson presented GA-MC-07, which had been delayed from the previous General Assembly. It proposes the addition of inclusive gender options when gender information is collected by any entity in the PC(USA). Teaching Elder Commissioner Alice Tewell spoke on behalf of the resolution that came from her presbytery stating that passing the resolution would, “Make her little church very happy.” With that affirmation, the assembly passed the resolution passed 328 to 46.

McNeill presented GA-MC-12, also referred from the 224th General Assembly (2020), for consideration. The resolution directs the Advisory Committee on Social Witness Policy (ACSWP) to update the 2004 Presbyterian study, “Transforming Families,” and to commend the study for use in the church. It also directs the Presbyterian Mission Agency (PMA) to make use of Research Services in conducting a survey of the denomination’s family demographics, and seeks to affirm the “Religious Freedom Without Discrimination” policy approved by the 223rd General Assembly (2018) which rejects practices that discriminate against LGBTQIA+ persons who wish to adopt, foster, or bear children. The resolution was affirmed 337 to 33.

Wilson drew the attention of the assembly to GA-MC-11. She noted that the resolution proposed a change from the use of the term “AIDS” to “all people living with HIV” in national awareness days recognized in the Presbyterian Planning Calendar and in all new PC(USA) publications. It was noted by a commissioner that “words matter” when he spoke in favor of this resolution. The resolution passed 365 to 7.

Wilson moved on and acknowledged GA-MC-15 was the most discussed and debated item in their committee work: how to hold General Assembly meetings in the future, specifically the format of the meetings. She noted in committee discussions they talked about “why we hold General Assembly” before considering how to do it. They discussed stewardship of the church’s resource, and stewardship of the earth. Wilson stated assemblies are more than business meetings – they are gatherings of the whole church, so all voices should be heard so that the Holy Spirit can lead us and call us to what we are supposed to do and be.

The committee brought a recommendation proposing the opposite of the current assembly which held committee meetings in-person and plenary sessions remotely. The recommendation for the next General Assembly has the work of the committees done remotely, and the plenary held in-person in Salt Lake City at a convention center. Alex Evangelista, teaching elder commissioner from Philadelphia, moved to amend the resolution from committee, advocating for an all in-person assembly. People spoke in favor and against this amendment, and it was defeated. Following the debate, the resolution as presented by the committee was approved 268 to 105, setting up a hybrid General Assembly in 2024.

Plenary 14 concluded with a proposed schedule change for the following day. Cristi Scott Ligon, moderator of the Bills and Overtures committee, offered a resolution to change the docket to start worship an hour earlier at 10:00 am EDT with Plenary 15 starting at 11:00 am. The schedule change was approved and Douglas Dicks, mission advisory delegate from Israel/Palestine, offered the closing prayer, centering the work of the General Assembly on Christ’s reign.